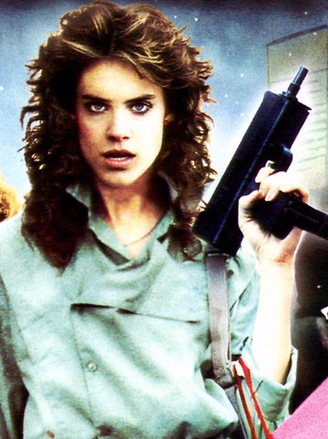 Poster art for Night of the Comet featured a fierce Regina Belmont (Catherine Mary Stewart) with her MAC-10 machine pistol at the ready.

Starring in a Comet's tale


ISON, we hardly knew ye! Just two weeks ago, astronomers (and people who write newspaper headlines) were calling you "the comet of the century." First spotted in September 2012 by Russian stargazers using the International Scientific Optical Network (ISON) telescope, you seemed destined for greatness. Although earthly calendars meant nothing to you, the fact that you grazed our sun on U.S. Thanksgiving Day (Nov. 28) caught our attention. Some of us could see you with the naked eye as you approached Old Sol, and social media lit up with the speculation that you would put on a real show as you swung back towards us, a journey that would put you closest to Earth on Dec. 26. When the BBC reported that you would "miraculously appear in our skies in the east," some went so far as to call you the 21st century's Star of Bethlehem. After that brush with the sun, though, you were just another "dirty ice ball." The remnant of the once great C/2012 S1 is now space debris, of interest only to the community of scientists who first discovered it. Fame may be fleeting in the firmament. In the cinema, though, a genuine star performance can grow brighter in memory, such as the one given by Edmonton-born Catherine Mary Stewart in the 1984 grrrl epic Night of the Comet.

Friday, November 16, 1984
NIGHT OF THE COMET. Written and directed by Thorn Eberhardt. Music by David Richard Campbell. Running time: 95 minutes.  Mature entertainment with the B.C. Classifier's warning: may frighten young children; some violence, very coarse language and swearing. MAGGIE GORDON DIDN'T get to play. Earlier this year, in The Last Starfighter,  Maggie (Catherine Mary Stewart) was the girl back home, the love interest that arcade-game champion AIex Rogan (Lance Guest) put on hold when he rocketed off to save the universe.
Regina Belmont plays to win. In Night of the Comet, Regina (actress Stewart again) is an 18-year-old video whiz who passes up a once-in-a-million years celestial light show so that she can pass a little intimate time with Larry (Michael Bowen), her movie projectionist boyfriend, in the confines of his steel-lined theatre booth.
As it turns out, she makes the right choice. The passage of the comet reduces most of humanity to a fine red dust. Eighteen-year-old Regina and her younger sister Samantha (Kelli Maroney) are  among the few survivors left to contend with the end of civilization as we know it.
Thorn Eberhardt isn't a name known to fans of science fiction. A first-time feature filmmaker, writer-director Eberhardt developed his skills making After School Specials for PBS.
In the process, Eberhardt learned to listen to kids. The result is a solid matinee hit, a 1950s plot with a 1980s sensibility.
The comet's passage results in Apocalypse now. As in any number of fifties annihilation epics, innocent survivors are left to contend with the horrors of mankind's morning after.
In this case, the principal survivors are a pair of self-reliant young women. Daughters of a Green Beret officer, both Reggie and Sam were brought up to fend for themselves.
"By the sixth or seventh grade, it became real obvious that we weren't going to go to Ranger school," Reggie tells Hector (Robert Beltran), a handsome, if somewhat less adept, survivor.
"Daddy would have gotten us Uzis," bratty Sam complains to her sister at another point  in the picture, when a machine pistol jams during some pre-combat target shooting.
There's no doubt that Major Belmont would have been proud to see the way his weapons-wise army brats handle themselves against all comers, many of them mutated monsters.
Credit Eberhardt with having a handle on current teen tastes and realistic priorities. Not only is he a screenwriter with an ear for  the way real kids talk, but he knew enough to spend more time on his script than on a special effects show.
Fast and funny, his Night of the Comet combines nostalgia for some low-budget science-fiction classics with just enough contemporary action and original plot surprises to make it a mass audience treat.

Afterword: In a happy coincidence, Night of the Comet was released on Blu-ray on November 19, just after Comet ISON became visible in the night sky. Their appearances reminded us that Catherine Mary Stewart was first among Alberta-born performers embraced by the science-fiction community for memorable performances within the genre. (Others include Michael J. Fox, Marty McFly in the Back to the Future films; Nathan Fillion, Firefly's Malcolm Reynolds; Erica Durance, Smallville's Lois Lane, and Eric Johnson, television's Flash Gordon.) In her sixth feature (and first Hollywood starring role), Stewart was a take-charge woman. Her Regina Belmont spoke to teenaged girls in their own language, making it clear that Alien's Ellen Ripley might be special, but wasn't unique. Buffy Summers would follow in their footsteps. Now 54, Stewart continues to work in both theatrical and television features. She also maintains a website,