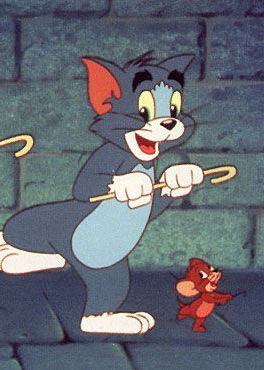 The cat and mouse give us the old soft shoe in director Philip Roman’s 1992 cartoon feature, Tom and Jerry - The Movie.


Lacklustre return to the big screen


Created in 2002 by the International Fund for Animal Welfare, International Cat Day is celebrated on this day (August 8). Surely Phil Roman knows about it, being the director of television’s Garfield cartoons and the 1992 cat-and-mouse feature Tom and Jerry - The Movie.

Sunday, August 9, 1993.
TOM AND JERRY - THE MOVIE. Written by Dennis Marks. Based on characters created by William Hanna and Joseph Barbera. Music by Henry Mancini. Produced and directed by Phil Roman. Running time: 80 minutes. General entertainment. THOSE DWARVES HAVE A lot to answer for.
Back in 1937, seven diminutive diamond miners and their runaway princess-housekeeper proved that feature-length cartoons could be sold successfully to filmgoers. No longer would ambitious animators have to confine their efforts to single-reel comedies.
Since ambition is not the same thing as talent, Snow White's success opened the market to junk dealers as well as artistic visionaries. The dwarves made superb movies like 1940’s Fantasia, The Phantom Tollbooth (1961) and Fritz the Cat (1972) possible.
Alas, they must bear some of the blame for Tom and Jerry - The Movie. The story of a runaway heiress, it is the first feature film appearance of the long-retired cat and mouse cartoon stars.
Following the Snow White formula, it has songs, a wicked, witch-like guardian and a little girl who talks to the animals. If only it had some energy.
Animation buffs will recall that Tom and Jerry were Metro-Goldwyn-Mayer's response to the anarchic comedy of the Warner Brothers menagerie. Created by the then-new team of William Hanna and Joseph Barbera, the cat and mouse team made its debut in 1940.
Their chase would go on for nearly 20 years, during which time they earned 12 Academy Award nominations. and carried home seven Oscars. The glory days ended in 1957, with the closure of the MGM cartoon studio.
Hanna and Barbera went on to create a revolution in television cartooning. As with the Communist revolution in Russia, the result was an evil empire, one based on limited animation and derivative creativity.
Gone were the days when the average H&B-produced T&J short ran eight minutes and took a year and a half from initial story work to finished film.
Tom and Jerry - The Movie produced its 80 minutes of theatrical animation in just 21 months. Work was farmed out to shops in Thailand and Taiwan, and involved more computer technicians than gag writers.
As written by Dennis Marks, it is the sappy tale of a cat named Tom (voiced by Richard Kind) and his mouse pal Jerry (Dana Hill), left homeless when their urban abode is leveled to make way for an apartment block.
After listless encounters with Puggsy (Edmund Gilbert), a philosophical dog, and a gang of Dead End alleycats, they meet little Robyn Starling (Anndi McAfee).
She is on the run from her abusive Auntie Pristine Figg (Charlotte Rae), a gross villainess cashing in on the disappearance of Robyn's billionaire daddy, a Howard Hughes-like adventurer lost in Tibet.
So far, so ordinary. Hired to provide music, composer Henry Mancini phoned in one of his Jazz Lite scores, an insipid effort more appropriate to a piano bar than the knockabout world of cartoons.
Mancini's unexciting contribution is typical of the picture's problems. Tastefully unobtrusive, it misses the whole point of cartoon fantasy — inspired comic exaggeration.
With a single exception — the surreal Money Is Such a Beautiful Word musical number performed by Aunt Figg and her slimy, English- accented attorney Lickbook (Tony Jay) — the plotting is predictable, the comedy unoriginal and the animation pedestrian.
Bland and boring, Tom and Jerry - The Movie belongs alongside Once Upon a Forest in your local video shop's two-for-one cartoon bin.

Afterword: California-born animation director Phil Roman made his feature film debut with Tom and Jerry - The Movie. Prior to that, he’d been the go-to guy for TV specials featuring comic strip artist Jim Davis’s pizza-loving pussycat Garfield.  Between 1984 and 1991, he produced and directed 10 of them. By a happy co-incidence, today (August 8) also is marked by Garfield fans as Odie Day —Odie being the cartoon cat’s canine foil — and so recalling Roman’s career is doubly appropriate.
Television was still cartooning’s new frontier in 1955, the year Roman signed on with Disney as an assistant animator on its Sleeping Beauty feature. Two years later, he took a job with a San Francisco-based studio where he directed TV commercials. Roman first encountered Tom and Jerry during a mid-1960s stint with the MGM studios where he worked on seven of their theatrical cartoon shorts. Back in Hollywood, he met Bill Melendez, the trusted friend of Charles Schulz, creator of the Peanuts comic strip. During their decade-long professional association, Roman directed some 18 Charlie Brown TV movies.
In 1984, shortly after directing his first Garfield cartoon, he launched his own studio, Film Roman. A TV animation house, it produced series of its own and, in 1992, became a subcontractor to The Simpsons, a relationship that continues to this day. Tom and Jerry  - The Movie was Roman’s single foray into feature filmmaking until 2007, when his studio co-produced The Simpsons Movie. In February 2016, the 85-year-old Phil Roman was honoured by the International Animated Film Society with its Winsor McCay Award for lifetime achievement.