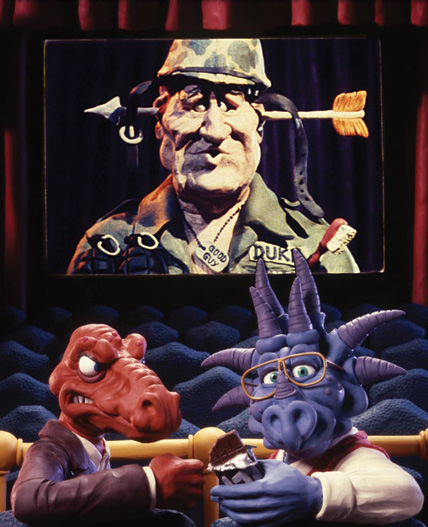 
Before the maturation of computer-generated imagery (CGI), animation was a hands-on art form that included among its masters Will Vinton. Born on this day (November 17) in 1947, the Oregonian artist packaged the best of his work in the 1987 compendium feature Festival of Claymation.


Then the Lord God moulded man out of the clay of the earth and breathed into his nostrils the breath of life, and the man became a living being.
— Genesis 2:7

IT BEGAN WITH A LUMP of clay. Will Vinton was fascinated by the possibilities he could see in Plasticine.
A student at the University of California, Berkeley, Vinton was taking courses in both architecture and film. Attuned to the art in architectural sculpture, he realized that with a movie camera, he could breathe life into clay.
The process is called stop-motion animation. Painstaking and time-consuming, it’s the technique used to make King Kong climb the Empire State Building, or the Millennium Falcon dodge space junk.
“In the glamorous, fast-paced world of film-making,” says the narrator of Claymation, a 1978 Vinton production, “the animator stands alone.” On screen we see an animation team, their camera  aimed at a miniature street upon which stands the colourful clay model of an elderly woman.
The camera operator exposes a single frame of motion picture film. The model animator then adjusts the figure, making minute changes in the position of the arms, legs and eyes.
The cameraman exposes another frame, his partner yawns, and the process is repeated. It takes 24 frames to make one second of screen motion, but when the job is done, we’ll see the clay woman walking along as if she were alive.
Vinton’s particular contribution to this honourable art is his own trademarked technique, Claymation. Instead of using articulated wooden dolls or plastic models, the Oregon-based artist recognized the magical, shape-shifting potential of modeling clay.
Working with a team of like-minded talents in Portland, he produced Closed Mondays, an eight-minute comedy that walked off with 1974’s animated short subject Academy Award. Unlike other stop-motion processes, Claymation is fluid, warm and satisfyingly alive.
It also encourages a certain spirituality. In the Festival of Claymation, a feature-length compendium of Vinton productions,  two of the films included take a Fantasia-like approach to evolution while another, The Creation, is Biblical in tone.
If that sounds unappealingly heavy, it’s not. An artist who’s retained his 1960s hippie ideals, Vinton combines an environmental sensitivity with a solid sense of fun.
The package consists of six shorts, 11 delightfully original TV commercials, the John Fogerty music video Vanz Kant Danz, and an excerpt from the 1985 Claymation feature, The Adventures of Mark Twain.
Vinton’s Festival is introduced by “critics” Rex and Herb. A pair of loquacious dinosaurs (from Vinton’s hilarious 1980 cartoon, Dinosaur), they effectively spoof the sort of minstrel show repartee that passes for movie reviewing on television.
Imaginative, energetic and thoroughly entertaining, Festival of Claymation opens today [1987].

Afterword: Will Vinton come to prominence during a transitional moment in American animation history. In retrospect, the changes were on view in his Festival of Claymation anthology, things an independent artist working outside of corporate Hollywood could see all around him. His first Claymation cartoon, 1974's Closed Mondays, was released the year after the first CGI animation was used in a Hollywood feature film (Westworld, in which it was used to simulate the robot Gunslinger's view of the world). In the decade that followed, Vinton directed just one theatrical feature — a stop-motion fantasy called The Adventures of Mark Twain — which almost certainly would have won the animated feature Oscar had the category existed at the time. In all, Vinton received four nominations prior to the release of his 1987 Festival of Claymation, including one for his work on director Walter Murch’s live-action fantasy Return to Oz.
The presence of all those TV ads in the Festival collection indicated the reality unfolding for small production companies such as Will Vinton Studios. Founded in 1978, it is best remembered for creating the California Raisins commercials and The PJs (1999-2002), a three-season Fox TV series created by (and for) actor Eddie Murphy. Seeking money for new feature projects, Vinton took on Oregon-based athletic shoe manufacturer Nike's founder, Phil Knight, as an investor in 1998. In 2002, he lost control of the company — it was renamed Laika Entertainment in 2005 — and Vinton spent the next 10 years on the margins working to rebuild his career.
Earlier this year, it was announced that Vinton will co-direct Codename: Housewife, a stop-motion animated musical inspired by a Korean short film. His partnership with Korean claymation director Hong Sukhwa is one example of the current globalization of the cartoon business. Their production partners include the Los Angeles-based Home Plate Entertainment, London’s GFM Films and the Chinese government’s movie division, China Film Group. Will Vinton celebrates his 69th birthday today (November 17).