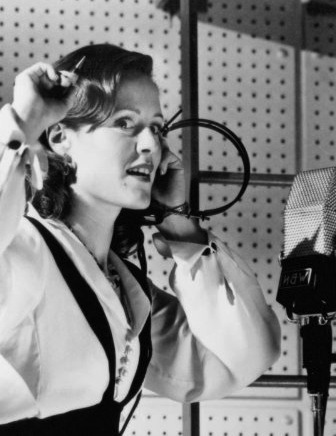 
Homage to radio 20 years in the making


The day the world changed forever — well, there are more of those turning up all the time. For example, it was on this day (Dec. 11) in 1896 that Guglielmo Marconi and his "system" (the idea that would become radio) were introduced to the world during a lecture called "Telegraphy Without Wires" at London's Toynbee Hall. Five years and a day later (Dec. 12, 1901), Marconi was at a listening post near St. Johns, Newfoundland, standing by to receive the first radio signal to cross the Atlantic. Either event might be cited as the moment that our age of mass media was born. By 1920, an accumulation of inventions made audio broadcasting possible, and stations were going on the air around the world. By 1939, commercial radio was part of the air North Americans breathed, the source of the news and entertainment that shaped who we were. Broadcasting bred new forms of politics (the presidential "fireside chat") and fictional narrative, including the serial dramas known as "soap operas". It made possible new forms of popular music and, of course, mass-market advertising. No surprise, then, that 1939 is the year George Lucas chose as the setting of Radioland Murders, the film that he planned to make immediately after his 1973 hit American Graffiti.

Friday, October 21, 1994
RADIOLAND MURDERS. Written by Willard Huyck & Gloria Katz and Jeff Reno & Ron Osborn. Based on a story by George Lucas. Music by Joel McNeely. Directed by Mel Smith. Running time: 112 minutes. Mature entertainment with the B.C. Classifier's warning: occasional suggestive language. DUE TO TECHNICAL difficulties, our regularly scheduled review is not available at this time. In its place, we present this previously published review of the 1987 film Radio Days.

"I love old radio stories," says Woody Allen at the beginning of Radio Days. "I have a million of them."
I love old radio stories, too. For years I've been waiting with delicious anticipation for Radioland Murders, the George Lucas project promised to us by Universal Pictures immediately after the success of his American Graffiti (1973).
I was prepared to love Radio Days, the latest film from a man whose . . .

We have been experiencing technical difficulties. We now join our regularly scheduled review, already in progress.

. . . to love Radioland Murders, a disappointingly mechanical film from the Star Wars series creator. A sci-fi guy with a passion for the past, Lucas conceived the picture as a tribute to the glory days of broadcasting.
An innovator with profoundly conservative instincts, Lucas is Hollywood's most creative recycler. Planned as his directorial follow-up to the hugely successful American Graffiti (1973), Murders borrows both structure and tone from his breakthrough hit.
Like Graffiti, it is a period piece, evoking nostalgia for a moment when all seemed well in the world and being young was an adventure. Here, the time is 1939; the adventure is the launch of WBN, a fourth radio network.
Like Graffiti, it takes place on a single night and features an ensemble cast playing characters whose stories are interwoven. Front and centre is the station owner's executive secretary Penny Henderson (Mary Stuart Masterson), responsible for co-ordinating everything in sight.
Complicating her life are six murders and an estranged husband named Roger (Brian Benben), a radio writer and the police investigation's prime suspect. Because the show must go on, their mystery-romance shares the screen with a chaotic, comic recreation of an evening of live programming.
Something new and original, Graffiti succeeded because it combined an organic structure (enhanced by the presence of Wolfman Jack's rock radio show) with wonderfully real characters. They reached out and touched us because they were us.
Murders makes a very different connection. It's rooted in Hollywood movie-making traditions from before the Second World War, specifically The Big Broadcast series that ran from 1932 to 1937.
(Forging a living link with those films is the presence of George Burns as stand-up comic Milt Lackey. The ageless Burns starred in the first three Big Broadcast features.)
As directed for Lucas by British comic Mel (The Tall Guy) Smith, Murders is a living museum. Exhibits include actor Madison McKoy's impersonation of Cab Calloway, Tracy Byrd singing Gene Autry's signature tune, and the WBN house band performing Spike Jones arrangements.
Unfortunately, the fast-talking, Front Page-style surround story is less than a delight. Actor Benben, whose character is supposed to combine dash with desperation, is utterly charmless, coming across more like a TV cartoonist's creation — the Happy Hamster of adventure heroes.
Masterson, by contrast, shines in the role of the quick-thinking, independent woman who's brighter than her guy and knows it. Recalling Jennifer Jason Leigh in The Hudsucker Proxy (1994), she works up an acceptable Jean Arthur-like presence.
In the end, though, amusing bits and musical nostalgia are just not enough reason to stay tuned.

Afterword: George Lucas remained remarkably loyal to Willard Huyck and Gloria Katz, the screenwriting partners that he met when they all were film school students. The married couple wrote the screenplay for1973's American Grafitti, his breakthrough hit. Huyck and Katz also wrote 1984's Indiana Jones and the Temple of Doom, the second Indiana Jones picture from producer Lucas and director Steven Spielberg. No surprise then, that Lucas would lend his name (as executive producer), to the Huyck-directed super-hero satire Howard the Duck. Based on comic creator Steve Gerber's brilliant send-up of the Marvel universe, the 1986 feature became one of the most reviled movies of its decade, as well as a box-office failure. That experience notwithstanding, Lucas was on board again to produce their Radioland Murders screenplay. Although the film brimmed with period references and performer cameos, it failed to charm audiences and lost a great deal of money for Universal Studios. It would also be Huyck's last feature film credit.