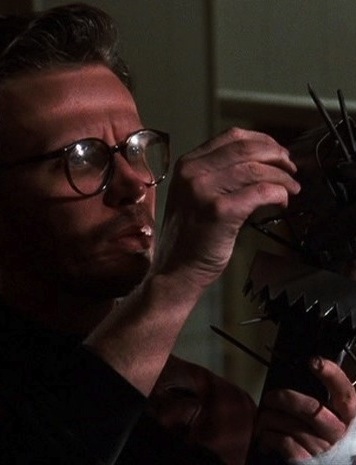 
After proving himself in Europe, writer-director George Pan Cosmatos eventually graduated to Hollywood features with 1985's Rambo: First Blood Part II. Born on this day (January 4) in 1941, he made the transition with an imaginative Canadian shocker, 1983's Of Unknown Origin.

Tuesday, December 6, 1983.
OF UNKNOWN ORIGIN. Written by Brian Taggert, based on Chauncey G. Parker's 1981 novel The Visitor. Music by Ken Wannberg. Directed by George P. Cosmatos. Running time: 88 minutes. 14 years limited admittance with the B.C. Classifier's warning: some violence, occasional suggestive scenes and very coarse language. RATS.
A creature or creatures Of Unknown Origin has taken up residence with Bart Hughes (Peter Weller) in his Manhattan brownstone, and he is furious.
An upwardly mobile executive with Commercial American Trust, Hughes doesn't have a lot of time to worry about random vermin. His boss, Eliot Riverton (Lawrence Dane), has just given him two weeks to complete a corporate reorganization plan, and it is definitely a make-or-break assignment.
"I don't need this!" the house-proud Hughes snarls when the film's toothy villainess chews through a dishwasher hose. The trouble is that she has a positive talent for avoiding conventional spring traps.
Clete (Louis Del Grande), the local handyman, is not surprised. "You're spending maybe 20 per cent of your time thinking about him," says Clete. "But he's spending 100 per cent of his time thinking about how to outsmart you."
Taking this advice to heart, Hughes throws himself into his rat war with an uncommon intensity. He becomes obsessive on the subject, grossing out the guests at an important dinner party with a steady stream of disgusting rat lore.
A pleasant surprise for shock fans, this filmed-in-Montreal project is far better than expected. Who would have guessed, given Victoria-based director George Pan Cosmatos's previous work — a trio of star-laden European bombs that included Massacre in Rome (1973), The Cassandra Crossing (1977) and Escape to Athena (1979) — that he would mould a no-name Canadian thriller into a suspense gem?
Here, with no great issues and no great egos to dissipate his attention, he involves us in the frighteningly real tale of a man forced into mortal combat with a natural terror that has come gnawing at the artificial environment that he has so carefully constructed for himself.
With understated wit and an appreciation of what really scares us, Cosmatos skilfully plays on our darkest apprehensions.
The tricks he uses are simple but effective.
Selected rat's-eye views emphasize the vulnerability of the householder, while periscope cameras take us into the creature's world as she scurries through sewer pipes, heat ducts and between walls.
Mythic dimensions are hinted at but never belaboured. More to the point are the fears we feel for Hughes's innocent, well-meaning secretary Lorrie Wells (Jennifer Dale) on the night that she lets herself into the house and slips off her shoes, unaware that the place is a minefield of bone-crushing traps.
Throughout, Cosmatos makes sure that we fear the worst. In the best tradition of the horror classics, Of Unknown Origin manages maximum tension with a minimum of explicit gore.

Afterword: Following his intense performance in Of Unknown Origin, actor Peter Weller made his own Hollywood breakthrough, playing the title role in director W.D. Richter's 1984 sci-fi fantasy The Adventures of Buckaroo Banzai Across the 8th Dimension. Weller confirmed his place among cult film stars with Paul Verhoeven's original 1987 RoboCop, and reprised the part in the 1990 sequel, RoboCop II.
Although he shot just one film in Canada, the Italian-born George Pan Cosmatos chose to make his North American home in Victoria, B.C. He lived there between directorial assignments from 1981 until his death in 2005. An actor's director, Cosmatos hit it off with Rambo star Sylvester Stallone. He directed the action actor in his next feature, the Los Angeles rogue cop thriller Cobra (1986). Cosmatos then reunited with Peter Weller, who accompanied him on location to the Mediterranean to star in the 1989 undersea adventure Leviathan. In 1993, he offered his version of the Wyatt Earp tale, Tombstone, shot in Arizona with Kurt Russell playing the legendary lawman. Cosmatos's final feature, the politically-charged 1997 release Shadow Conspiracy, was shot in and around Washington, D.C. Left blind following a 2003 surgery, heavy smoker Cosmatos died of lung cancer two years later. He was just 64.