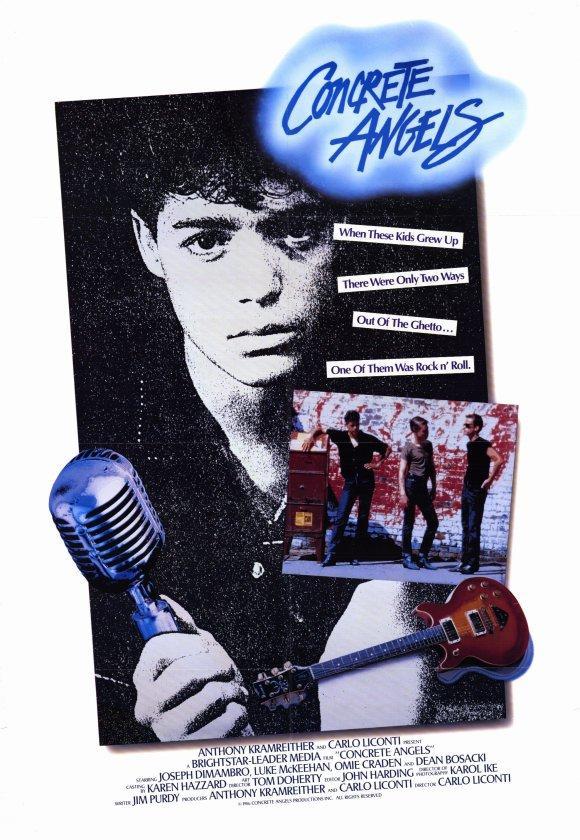 If Bello Vecchi (Joseph DiMambro) looks stressed, it’s because “When These Kids Grew Up / There Were Only Two Ways / Out Of The Ghetto . . . / One Of Them Was Rock n’ Roll.” Or at least that’s what it says on the poster for director Carlo Liconti’s 1987 feature Concrete Angels.

Escaping life in a ghetto


Rockin’ out on Toronto’s mean streets


On this day (September 7) in 1964, The Beatles arrived in Toronto for the first of two concerts in the Maple Leaf Gardens hockey arena. In 1987, Carlo Liconti used that historic moment as a vital plot point in his directorial debut feature, the teen band-competition movie Concrete Angels.

CONCRETE ANGELS. Written by Jim Purdy. Music by Robert Miller. Co-produced and directed by Carlo Liconti. Running time: 95 minutes. Rated Mature with the B.C. Classifier’s warning: Some very coarse language and suggestive scenes. IT IS TO GROAN.
“It was 1964,” say advertisements for Concrete Angels. “The year of the Beatles.
“If these working class lads from the slums of Liverpool could make it, perhaps there was even hope for Bello, Ira, Sean and Jessie.
"Every city has its mean streets and Toronto in the sixties was no exception . . .”
Wait. There's more.
“Concrete Angels is a dramatic film of Toronto ghettos . . .”
I was prepared for shocking stuff.
What  I wasn't prepared for was the shock of seeing these teen desperadoes introduced as seventh graders at the St. Thomas Aquinas Catholic School, the red brick schoolhouse where the filmmakers shot their picture.
It is to remember.
Though director Carlo Liconti's camera is focused on detached, uncaring Miss Hutchins (Clare Barclay), I remember Miss Kelly, the tough, dedicated teacher who actually did teach seventh grade in this classroom in this very school.
I remember the kids who sat with me in Miss Kelly’s class in 1957 — Geraldine Cancilla, Billy Maddot, Carol Bedek, Vincent Geraghty, Donna Andrioli, John Fiore, Carol McLaughlin — and I wonder if any of them has seen this sour, amateurish attempt to turn the old neighbourhood into a low-rent Hell's Kitchen.
Most filmgoers, I realize, really don't care if screenwriter Jim Purdy's portrayal of blue-collar York Township is arrant nonsense. Movies are supposed to create their own worlds and all that matters is how well the filmmakers bring them to life.
Remember American Graffiti? Though George Lucas's 1973 film was set in California, we knew every one of the kids in it. They were real and alive, incredibly accurate reflections of ourselves and people that we'd all known.
Liconti's would-be rock stars Bello (Joseph DiMambro), Ira (Omie Craden), Sean (Luke McKeehan) and Jesse (Dean Bosacki) claim to be the kids that I really did grow up with.
Well, they're not.
Liconti's film claims that it's exploring an urban reality, a moment in the nation's experience when its children were coming of age desperate and despairing. It's not.
A throwback to the downtown loser films of Don Shebib (1970’s Goin' Down the Road; 1973’s Between Friends), it borrows its attitudes, language and concerns whole from American teen trouble movies, awkwardly imposing them on an ethnically mixed selection of Toronto school kids.
It's a poor fit, and the result is impoverished melodrama. An attempt to reduce life in the big city to a choice between crime and instant celebrity, Concrete Angels fails to make its characters either tragic or interesting.

Afterword: OK. That time, it was personal. Abandoning any critical distance at all, I trashed in print a picture that trashed on film an old neighbourhood that was my old neighbourhood. I was offended, and in the process shortchanged my readers with a review that offered anger rather than analysis. For one thing, the piece did not make clear the importance of The Beatles to the film’s plot. In 1964, the Liverpudlian rock group visited Canada for the first time (a tour that opened in Vancouver on August 22). The movie's Concrete Angels are a quartet of wannabe rock stars, a drab four who enter a local radio station’s battle-of-the-bands contest to be the opening act for the Fab Four’s Toronto concert.
I was seriously remiss in not acknowledging Carlo Liconti’s achievements as the film’s co-producer. The founder in 1980 of Leader Media, a Toronto production house specializing in TV commercials, he managed to negotiate performance rights for the seven Beatles tunes (admittedly cover versions) heard on his low-budget film’s soundtrack. The Italian-born director was back two years later with Brown Bread Sandwiches (1989). Based on the Toronto immigrant experience circa 1957, it was promoted as “a sophisticated sex comedy.” Although I didn’t like it any more than Concrete Angels, it demonstrated Liconti’s ability to hire top talent, including Italian cinema star Giancarlo Giannini and Canada’s two Kims, Cattrall and Coates.
Liconti has accomplished much in the 30 years since Concrete Angels was released to theatres, as a visit to his Leader Media Productions website will show. And me? With no musical talent at all, I had to take the only other way out of the ghetto . . . high school and college.

See also: On February 8, 1964, the the CBS television network's Ed Sullivan Show introduced America to The Beatles. That concert inspired the feature-film debut of director Robert Zemeckis with the 1978 teen comedy I Wanna Hold Your Hand.