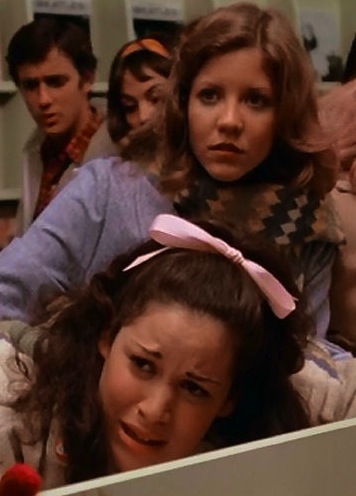 Along for a fab ride


I like to think that there is something of Eugene Allen in the character of Anne Lewis. I'm partial to father-daughter stories and Nancy Allen, the actress who brought Officer Lewis to life in the original RoboCop movie, is the daughter of a Yonkers, New York, police lieutenant. Although she's not spoken of it in any of the interviews I've read, it stands to reason that she drew upon her own lived experience. Allen was part of a new generation of performing talent favoured by Hollywood's "movie brat" directors such as Steven Spielberg, George Lucas and Brian De Palma. She made her big screen breakthrough in De Palma's 1976 adaptation of Stephen King's Carrie and was featured in Spielberg's 1979 epic comedy 1941. She became De Palma's leading lady in real life — they were married from 1979 to 1984 — and in his next three features. She was outstanding in Paul Verhoeven's 1987 RoboCop, and played the Lewis role in the 1990 and 1993 sequels. In 2001, Allen became involved with the weSPARK Cancer Support Center in Sherman Oaks, California, a care facility founded by her lifelong friend Wendie Jo Sperber. Following Sperber's death in 2005, Allen increased her involvement, becoming the organization's full-time executive director in 2010. Born on this day (June 24) in 1950, Allen first met Sperber when they starred together in debuting director Robert Zemeckis's 1978 Beatlemania classic, I Wanna Hold Your Hand.

I WANNA HOLD YOUR HAND. Co-written by Bob Gale. Features the music of The Beatles. Co-written and directed by Robert Zemeckis. Running time: 104 minutes. General entertainment with the B.C. Classifier's warning: some swearing and coarse language.
SATURDAY, FEBRUARY 8, 1964: Ushers employed by the CBS television network's Ed Sullivan Show are assembled for a final briefing. Sunday, the show will introduce America to The Beatles.
"Be prepared for screaming, hysteria, fainting, fits, seizures, spasmodic convulsions, even  attempted suicides," Sullivan (impressionist Will Jordan) tells them. ''It's all perfectly normal. It merely means these youngsters are really enjoying themseIves.''
Enjoyment? Yeah.
Or, more precisely, yeah-yeah-yeah.
Also fab, gear and soo-per. I Wanna Hold Your Hand just happens to be the best movie to open here so far this year.
It's Beatlemania. More than that, though, it's a terrific comedy, a picture with pace, perspective and a whole lot of heart. I haven't had so much fun at the movies since American Graffiti.
It marks the feature film debut of director Robert Zemeckis, who, together with Bob Gale, had a great idea for a movie (see following item). The result is I Wanna Hold Your Hand, the warm and witty story of four Maplewood, New Jersey, teenagers who are determined to meet The Beatles.
Zemeckis and Gale, both 26, have got to be great guys. In their screenplay, they've managed to create a cast of characters that are not only credible, but likeable, something that's all too rare in movies today.
You have to fall in love with Pam, Rosie, Grace and Janis, the kids for whom Beatlemania becomes a living force. The group's leader is Grace Corrigan (Theresa Saldana), an aspiring photo-journalist who sees an opportunity in the British rockers' American debut.
Convinced that exclusive pictures of the mop-topped musicians could launch her career, she talks Larry Dubois (Marc McClure), the local undertaker's son, into ''borrowing" one of his father's limousines. A limo, she reasons, will get them past the police surrounding the Beatles' hotel.
Rosie Petrofsky (Wendie Jo Sperber), the true fan, wants nothing more than to see her idols in person. She has an endless supply of dimes, all held in readiness for radio phone-in contests offering Ed Sullivan Show tickets as prizes.
Although she loves Paul, she finds a soulmate in Richard ''Ringo" Klaus (Eddie Deezen), a skinny, self-proclaimed ''greatest Beatle expert in the universe." It's practically love at first shriek.
Janis Goldman (Susan Kendall Newman) would rather the British had not invaded America's musical scene. A folkie, she's making the trip to Manhattan to display a protest banner declaring that The Beatles lack "artistic integrity."
Pam Mitchell (Nancy Allen, Sissy Spacek's chief tormentor in Carrie) is dreamy and quiet. She just goes along for the ride. Secrectly engaged to her high school sweetheart, she is aware only that this is her ''last night as a single woman."
Well, maybe not.
There is a big world out there, Pam. After The Beatles, can you really be satisfied with a guy who believes that "plastic furniture covers are the thing of the future"?
Zemeckis has produced a film brimming over with sharp characterizations and
marvellous, memorable moments. In one, Grace and Rosie are riding the hotel's service elevator to The Beatles' floor.
Fearing security guards, Grace gets off at 11, one floor short of their goal. Rosie stays aboard. The elevator rises to 12 and stops.
There is a long, tense pause. The doors refuse to open. Have they been fixed? Has Rosie come this far, come this close only to be frustrated?
Suddenly, the doors part and . . .
But why spoil it? Go and see the movie. You'll love it. I know I did.
*    *    *
CLOSE ENCOUNTERS OF THE BEST KIND: Three years ago, Robert Zemeckis, a film student at the University of Southern California, met Steven Spielberg. The Jaws director looked at Zemeckis's award-winning thesis film and was impressed.
Last year, when Warner Brothers, holders of the original option on I Wanna Hold Your Hand, wanted to fire the two young writers, Spielberg came to the rescue. He undertook to "guarantee" the property to Universal Pictures.
Their unique arrangement called for Universal to buy the Zemeckis-Gale script, provide them with a $2.6-million budget and let Zemeckis direct the picture. In return, Spielberg took on the job of executive producer.
If anything went wrong, he promised to complete the project, thus giving Universal a new Steven Spielberg picture. Universal couldn't go wrong.
Fortunately for all concerned, there was nothing wrong with Spielberg's instinct. Midway through, Universal decided that it liked what it was seeing and signed Zemeckis to a three-picture contract.
Filmgoers, meanwhile, are being introduced to a major new talent.