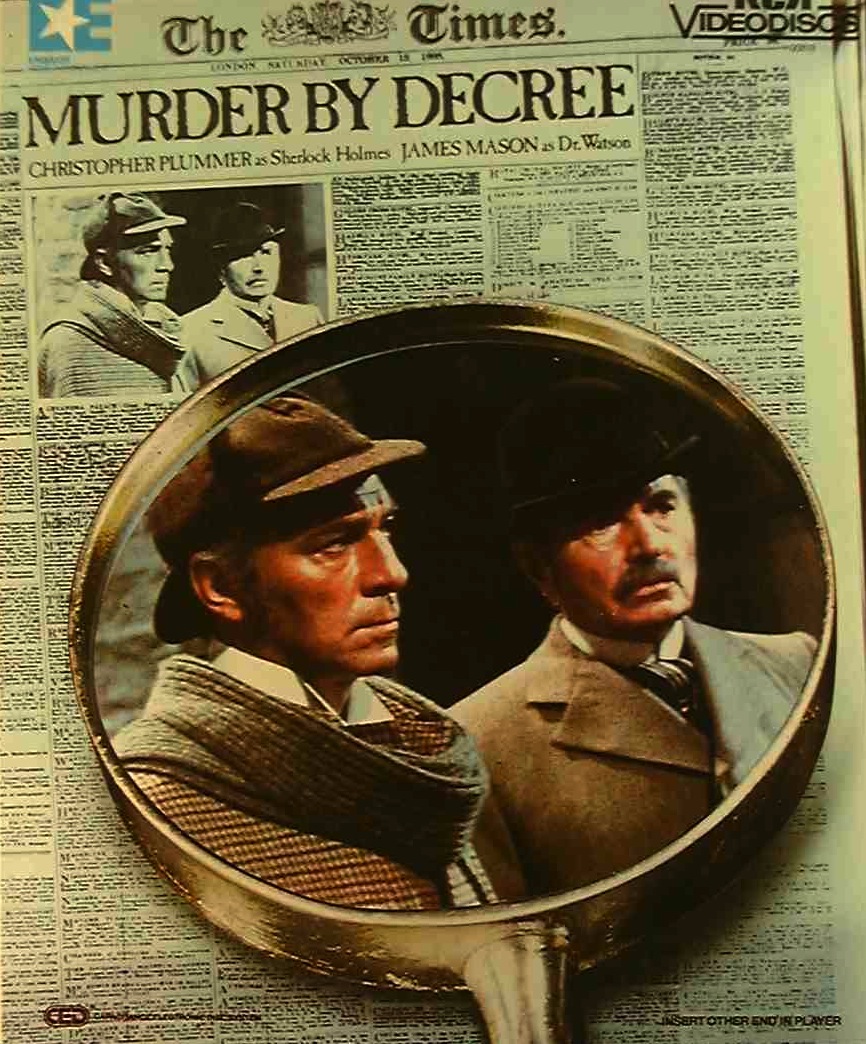 A milestone in the portrayal of Holmes and Watson in the movies, director Bob Clark's Murder by Decree starred Christopher Plummer and James Mason.


Dr. Watson as a collaborator, not a foil


The product of a Jesuit education, Edinburgh-born Arthur Ignatius Conan Doyle entered medical school an agnostic with a respect for logical reasoning. He graduated with an appreciation for the deductive diagnostic skills he learned from a forensics instructor named Joseph Bell. It all came together in an 1886 story called A Study in Scarlet, the first of the "reminiscences of John H. Watson, MD" about his working relationship with "consulting detective" Sherlock Holmes. In 1927, three novels and 56 short stories later, Doyle retired a cast of characters that had ceased to be his own. A significant new social phenomenon called fandom emerged around the residents of 221B Baker Street, and it rose up in protest when, in an 1893 story called The Final Problem, Doyle killed off Holmes. The author eventually relented, and the idea of the public participating in its popular media preoccupations was established. Among the most popular characters in English literature, Holmes has been portrayed in at least 150 feature films, made-for-TV movies and TV series. In the process, the characters have evolved to reflect the times and circumstances of their inspiration. Today (May 22), the 155th anniversary of Doyle's birth, Reeling Back recalls the influential Canadian contribution to the lore, 1979's Murder by Decree.

Friday, February 9, 1979
MURDER BY DECREE. Written by John Hopkins, based on The Ripper File (1975) by Elwyn Jones and John Lloyd, and characters created by Sir Arthur Conan Doyle. Music by Paul Zaza and Carl Zittrer. Directed by Bob Clark. Running time: 124 minutes. PICTURE CHRISTOPHER PLUMMER in a deerstalker. Picture James Mason at his side, wearing a bowler. Can you picture them as Holmes and Watson?
Bob Clark could. An able and ambitious director, he was sure that they would be perfect as the mid-Victorian detecting team. He was right.
Murder by Decree is the latest in a long line of Sherlock Holmes movie mysteries. Its producers claim it is the 134th. More to the point, it is the best.
That, in itself, is a bit of surprise. Bob Clark's previous feature film credits were for such exploitation fare as Black Christmas (1974) and The Breaking Point (1970). Shocks were his specialty.
The chance to work on location in London seems to have inspired him. His first inspiration was his storyline, an eventful meeting between fiction's most famous consulting detective and the historical killer known as Jack the Ripper.
(Holmes and the Ripper met once before, in James Hill's 1965 film, A Study in Terror. The results were less than memorable.)
New evidence has recently [1975] come to light suggesting that the sensational series of Whitechapel murders might have been committed by a person of royal birth. Clark was intrigued by the notion, and saw in it real potential for a movie.
His second inspiration was his casting. Plummer and Mason handily eclipse every previous pairing in the Holmes/Watson roles. Together, they bring humour and humanity to the parts that will be hard to surpass.
British-born screenwriter John Hopkins's clever, literate script allows the actors to work some significant revisions on the standard screen approach to the Conan Doyle characters. Plummer's Holmes, though still cerebral, is also capable of passion. The Toronto-born actor shows us a man of awesome intellect who also possesses a strong social conscience.
Even so, Mason's Watson comes very close to stealing the show. Gone is the bumbling buffoon of past portrayals. In this film, Dr. John is Holmes's partner and collaborator, rather than his foil. He is a man with tastes and talents that are different from those of his roommate, but no less useful.
Together, they create the kind of screen chemistry that is a pure delight to watch. Happily, they are surrounded by superb supporting players, every one of them contributing gemlike performances.
Scotland Yard is represented by a trio of British stalwarts. Frank Finlay is Holmes's old friend Lestrade. David Hemmings appears as Foxborough, an intense young inspector, and Anthony Quayle is Sir Charles Warren, a police commissioner with no use at all for Holmes or his methods.
Additional star power is provided by the film's formidable Canadian contingent, a group that includes Donald Sutherland as Robert Lees, a psychic whose haunted eyes are filled with violent visions.
Genevieve Bujold is cast as Annie Crook, a pathetic madwoman whose once-irresistible charms set the whole tragic chain of events in motion. Susan Clark is the unlucky Mary Kelly, on the run from the Ripper because she knows too much.
With his earlier pictures, the Toronto-based Clark proved that he could make effective commercial thrillers. Murder by Decree gave him the chance to work abroad, in period and with a first-rate cast.
The result is a superb addition to Holmesiana, must viewing for the Baker Street Irregulars, conspiracy theorists and fans of fine mysteries.

Afterword: The cinematic re-imagining of the great detective that began with Herbert Ross's adaptation of Nicholas Meyer's novel The Seven-Per-Cent Solution (1976) gained significant momentum with the success of Bob Clark's Murder by Degree. From 1985 to 1995, actor Jeremy Brett made the role his own, playing an energetically eccentric Holmes in 39 British television series episodes and two made-for-TV features. Robert Downey Jr. staked his claim to the character in 2009, starring in Guy Ritchie's steampunky Sherlock Holmes, then reprised the role in its 2011 sequel, A Game of Shadows. Since 2010, British television has been providing U.S. public broadcasters with the series Sherlock, a slick, modernized take on the character starring Benedict Cumberbatch and Martin Freeman. Painfully slow in the production of new episodes, BBC Wales has delivered only 11 to date. More prolific is the American-made Elementary series. Set in present-day New York, it stars Jonny Lee Miller as the deductive genius (and recovering drug addict) who consults for the NYPD. His Watson is a woman, played by Lucy Liu, just one of the inspired liberties the show's creators have taken with the canon. It concluded its 48th episode and its second season on May 16, with a third season to come.

See also: Other aspects of director Bob Clark's eclectic Canadian career are noted in my reviews of Black Christmas (1974) and A Christmas Story (1983).