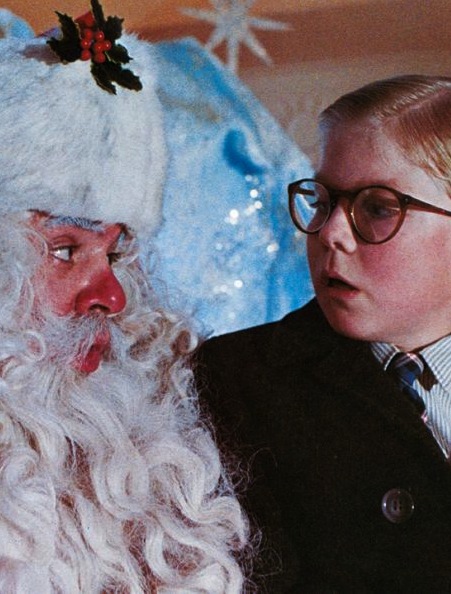 
One film that really is a classic

Thursday, December 1, 1983
A CHRISTMAS STORY. Co-written by Jean Shepherd and Leigh Brown, based on Shepherd's book In God We Trust, All Others Pay Cash. Music by Carl Zittrer and Paul Zaza. Co-written, co-produced and directed by Bob Clark. Running time: 94 minutes. Mature entertainment. "APRIL," T.S. ELIOT WROTE, "is the cruellest month." Maybe, but Jean Shepherd and Bob Clark can make a darned good case for December, the time when nine-year-olds suffer the twin torments of anticipation and apprehension.
Ralphie Parker (Peter Billingsley), the bespectacled hero of A Christmas Story, is one such sufferer. He has never in his life wanted anything more than he wants a genuine Red Ryder Carbine Action, 200-shot, Lightning Loader Range Model Air Rifle with a shockproof high adventure combination trail compass and sundial set right in the stock.
His mom (Melinda Dillon) is not encouraging. "You'll shoot your eye out," she says with a shiver.
Miss Shields (Tedde Moore), his elementary school teacher, sides with mom. Ralphie's last hope is that jolly old elf perched on his throne in the toy department of the Higbee Company in downtown Cleveland.
The setting, middle America circa 1940, is one that nostalgia-oriented film-makers often explore with sepia-toned sentimentality. The title, A Christmas Story, seems to threaten filmgoers with a sugar-syrup shower bath.
Look again. Bob Clark, the New Orleans-born director who toiled out of Toronto during the short-lived Canadian film boom, is the man who made his fortune with the piquant Porky's pictures.
The screenplay here is based on selected reminiscences from Shepherd's 1966 essay collection In God We Trust, All Others Pay Cash. A satirist, Shepherd made his initial impact penning Ralphie's whimsical memoirs for Playboy Magazine.
Together, they've managed to produce a familiy film with a fine edge of madness. Like Steven Spielberg's E.T., Ralphie's story is told from the child's perspective, a point of view that is intensely serious and cheerfully askew.
By dropping back to an idealized 1940, the movie allows adults in on the fun, inviting us to test our own recollections of Christmas Past against those of Clark and production designer Reuben Freed. Like Spielberg, Clark is a comedy director who is both warm and generous in his treatment of characters.
If Mom or Ralphie's "Old Man" (Darren McGavin), or back-lane bully Scut Farkus (Zack Ward) seem overdrawn, it is always in keeping with our hero's state of mind.
At a time when the movies are emphasizing the dramatic and the violent, A Christmas Story is an unexpected holiday treat.

Afterword: On the second day of Reeling Back's 2013 Christmas Countdown, we revisited 1974's Black Christmas , and I said that director Bob Clark had left an indelible mark on the Christmas movie as we have come to know it. If the first of his Canadian-made movies created the anti-Christmas film sub-genre, the seventh and last of his Toronto productions reinvigorated the market for traditional seasonal features. From the mid-1950s through to the release of Clark's A Christmas Story, Hollywood generally neglected Christmas-themed movies. There wasn't a lot of excitement for his project either. But the incredible financial success of Porky's (1982) gave Clark the leverage he needed to mount the production, one that he'd been discussing with writer Jean Shepherd for some 10 years. The results were a breakout hit that's now considered a classic, a revival of seasonal Christmas movie production, and Clark's leaving Toronto for Los Angeles, where he would make less interesting features until his death in a 2007 auto accident.
Since 2000, there has been a stage version of A Christmas Story (Katrina Dunn directed the Vancouver production in 2006). A Christmas Story: The Musical made its debut in 2009, with actor Peter Billingsley (the film's Ralphie) acting as executive producer of the 2010 Seattle run.