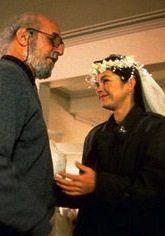 Michel Brault directs Geneviève Bujold in the role of Claire, who enters into a marriage of convenience in the 1990 feature Paper Wedding.


Romantic rebellion in a refugee crisis


The imminent arrival of 25,000 Syrians was a major topic at the three-day Canadian Council for Refugees conference that ended today (November 28) in Hamilton, Ontario. Refugee settlement was also an issue in director Michel Brault's compelling 1990 drama Paper Wedding.

Friday, February 22, 1991.
PAPER WEDDING (Les Noces de papier). Written by Alberto Kurapel, Jefferson Lewis, Hélène Lebeau, Andrée Pelletier. Music by Martin Fournier. Directed by Michel Brault. Running time: 90 minutes. Rated Mature with the B.C. Classifier's warning: occasional nudity. THEIRS IS NOT A LOVE STORY.
The day that Claire Rocheleau (Geneviève Bujold) and Pablo Torres (Manuel Aranguiz) are joined together, one man is convinced their marriage is no marriage at all.
Tough, merciless Inspector Bouchard (Gilbert Sicotte) knows Torres for what he is — an illegal immigrant from Chile who may be a political refugee. He knows, too, that Mlle. Rocheleau is the spinster sister of Torres's attorney, a dedicated civil rights lawyer (Dorothée Berryman).
Bouchard is determined to expose their Paper Wedding.
Bouchard knows the facts. What he misses are the emotions, the fine elements of disillusionment and justice, the subtle interplay of human passions that accompany the couple to the altar.
Michel Brault works with facts. One of Canada's great documentarists, the Montreal-born filmmaker came up through the NFB ranks, establishing himself as a world-class cinematographer before moving into the director's chair.
As a director, Brault is adept at recording emotional realities. His searing 1974 docudrama Les Ordres remains our most eloquent cinematic account of the 1970 Quebec Crisis.
Brault's social sensitivity is on display again as he examines a marriage of legal convenience. A tale of mid-life adjustment, his Les Noces de papier (Paper Wedding) recalls Anne Claire Poirier's effective, insightful 1982 comedy Quarantaine (Beyond Forty).
Making the drama come alive is Bujold, commanding in a non-glamour role. As Claire, she is a sad-eyed single, a teacher who is feeling used and used up.
Involved in an affair with married Milosh Velansky (Téo Spychalski), she is painfully aware of having turned 40. Though he enjoys their trysts, he pointedly ignores her wish that they do something together while "completely dressed."
When her sister asks her to "marry" fugitive Latino journalist Torres, a man she calls "mysterious, sad, a bit of a poet," Claire's answer is no.
Later, she reconsiders and agrees to the ruse. And why does she do it?
Perhaps it's out of pique, as a way of expressing her growing anger with Milosh.
Perhaps there's a touch of latent idealism in the act.
Or, could it be a small spark of romantic rebellion? For whatever reason, she does it. The results prove once again that no one can distil more "truth" from the Cinéma vérité style than Brault.
He is especially good working with his friend Bujold, an actress he first directed in the 1964 anthology feature La Fleur de l'age: Les Adolescentes.
Together, they've created another timely cinematic gem.

Afterword: It's said that the elephant never forgets. It's a fact that the official motto of Québec is Je me souviens (I remember). What better name, then, for a project dedicated to the preservation of the feature films made in Canada's French-speaking province than Éléphant: The memory of Québec cinema? Launched in November 2008, it has already restored and digitized well over 200 films. Last year, the non-profit (funded as a philanthropic initiative by the Quebecor telecom and media conglomerate) expanded into exhibition, presenting Éléphant ClassiQ, a five-film festival within the 2014 Montreal Festival du nouveau cinéma. Earlier this month, Éléphant ClassiQ became a standalone festival, a four-day event with screenings of 19 restored feature films.
Largely ignored by Canada's English-language press, the occasion was noted by the U.S. entertainment trade paper Variety, which compared it to the TCM Classic Film Festival held annually in Los Angeles. Present at its November 21 screening of 1967's Entre la mer et l'eau douce (Between Sweet and Salt Water) was the film's star, Geneviève Bujold. A tale of failed romance, it was documentarian Michel Brault's first fictional feature, and his second time directing Bujold.