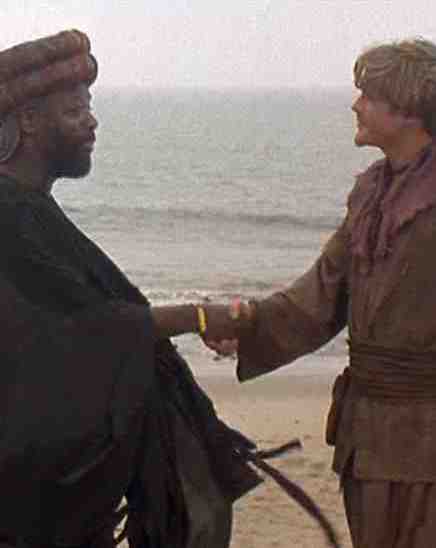 
Born on this day (March 13) in 1911, sci-fi writer L. Ron Hubbard founded the “religion” called Scientology. Among the celebrities to embrace his faith was Isaac Hayes, the soul-singer/actor who had a starring role in director Mel Brooks’s over-the-top 1993 comedy Robin Hood: Men in Tights.

ROBIN HOOD: MEN IN TIGHTS. Co-written by Evan Chandler and J. David Shapiro. Music by Hummie Mann. Co-written, produced and directed by Mel Brooks. Running time: 113 minutes. Rated Mature with the B.C. Classifier’s warning "occasional suggestive scenes, coarse language and violence.”
MELVIN BROOKS WAS having trouble;
What a sad, sad story.
Needed a new pastiche to restore his former glory.
Where, oh where was it?
What would make a hit?
He looked around;
And then Mel found
A morsel he could spit.
And ...
Now ...
It's ...
Robin Hood: Men in Tights!

Ouch! That doesn't scan!
The title is supposed to be sung with the same rhythmic bounce as his unforgettable hit “Springtime for Hitler in Germany.”
With one of the screen's great comic moments— the Broadway opening sequence — Mel Brooks's 1968 debut feature The Producers introduced movie audiences to a writer-director with an individual, outrageous and subversive wit.
(The picture was dangerously funny — at a screening of that movie, I damn near died of laughter-related asphyxiation.)
Shortly thereafter, though, Brooks settled into the routine spoof business, applying his television training to the production of feature film parodies. Blazing Saddles, his 1974 western take-off, was a commercial hit.
His reputation peaked with Young Frankenstein (also 1974), the last film in which he demonstrated any real feeling for his subject matter. A man caught in a time warp, he's been living off his past successes as he does the same thing over and over again.
For years now, Brooks has been nostalgic for his supremely unsuccessful half-hour television series, When Things Were Rotten. A satirical take on the Robin Hood legend, it ran for 13 weeks in late 1975.
"I've always wanted to do a Robin Hood movie," he has said. In mid-1991, the release of the dreary Robin Hood: Prince of Thieves gave Brooks just the excuse he needed.
It didn't matter that the Kevin Costner vehicle was its own bombastic, bone-headed self-parody. After the failure of Brooks's "serious" Life Stinks (1991), the opportunity to launch a comic shaft at the apparent Robin Hood revival was like a gift.
His new film made me nostalgic for when Brooks-made things were funny. As off-target as the picture it‘s supposed to be kidding, Men in Tights is so out of touch as to include a chorus boy routine in which the Merrie Men mince, while singing "we may look like pansies / But don't get us wrong / Or else we'll put out your lights."
To make up for the noticeable lack of borscht-belt schtick in recent movies, Brooks offers us the tale of Robin of Loxley (Cary Elwes) and his love for Maid Marian of Baggel (Amy Yasbeck).
There is a neurotic Prince John (Richard Lewis). A New York-accented monarch, he suffers from high anxiety rather than medieval power madness.
Then there is soul singer-turned-actor Isaac Hayes, who has the role of Asneeze, Robin’s unlikely Moorish partner. Based on Morgan Freeman’s equally unlikely character Azeem from the Costner picture, Hayes actually generates fewer laughs than Freeman did.
And, of course, Brooks makes the expected directorial appearance. Here, he's Rabbi Tuckman, a sacramental wine merchant and itinerant moyle who deals in discount circumcisions.
Are we having fun yet?
As in the Costner feature, this movie's best moment is its last — the "surprise" appearance of a guest star playing King Richard. As in the previous film, the role is played by a man who's previously worn Robin's Lincoln green costume.
Patrick Stewart (who visited Sherwood Forest in the Next Trek television series episode Q-Pid) even does a credible imitation of Sean Connery's Scots accent.

Afterword: Science-fiction fans of a certain age have all heard the story: Two pulp magazine writers — Robert A. Heinlein and L. Ron Hubbard — walk into a bar. During the course of their conversation (said to have taken place in the mid-1940s), the subject turns to religion, specifically the tax breaks available to established churches. It ends with a bet as to which of the two could create a new religion. If such a bet existed — most sources say it’s a myth — then Hubbard won. In 1950, he published Dinanetics: The Modern Science of Mental Health, the book that became the canonical text of Scientology. Introduced as a movement, Hubbard’s belief system morphed into a religion in 1954 with the incorporation of the first Church of Scientology in Camden, New Jersey. (Heinlein’s 1961 novel, Stranger in a Strange Land, led to the founding of a “Church of All Worlds” in 1968. But that’s another story.)
Origins notwithstanding, Scientology exists. In 1955, the publicity-savvy Hubbard created the church’s “Project Celebrity,” an outreach program designed to promote his faith among the famous. Today, Los Angeles  has the largest concentration of adherents, including such celebrity scientologists as Tom Cruise, John Travolta, Kelly Preston, Kirstie Alley, Anne Archer and  Nancy Cartwright (the voice of Bart Simpson). Singer/actor Isaac Hayes embraced the faith 1993, the same year that Robin Hood: Men in Tights was released. Hayes went on to appear in church training films and to compose music for the organization.
Between 1997 and 2005, Hayes was best known as the voice of Chef, a recurring character on the satirical cartoon series South Park. In November 2005, the show’s creators targeted Scientology in an episode titled Trapped in the Closet, and Hayes felt the sting personally. He suffered a minor stroke in January 2006 and, after speaking out against the episode's “intolerance and bigotry,” quit the show. Hayes died in 2008 at the age of 66.