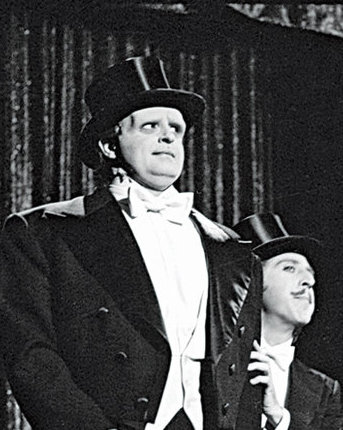 
Today (August 30), classic horror fans mark Frankenstein Day, a celebration of the literary genius of 19th century wild child Mary Shelley, who was born on this day in 1797. Her creation is recalled in more that 50 feature films, including director Mel Brooks’s 1974 comedy Young Frankenstein.

YOUNG FRANKENSTEIN. Co-written by Gene Wilder. Based on characters created by Mary Wollstonecraft Shelley. Music by John Morris. Co-written and directed by Mel Brooks. Running time: 106 minutes. Mature entertainment. WOODY ALLEN HAD BETTER watch his step.
There may come a time when the movie business will only be able to support one master of mad comedy and, at the moment, the undisputed front-runner for that title is not Allen, but the diminutive Mel Brooks.
His last film, Blazing Saddles, managed to outrage audiences into hysterics. A gamey burlesque of movie westerns, it has played here [Vancouver] non-stop for more than 10 months.
His current film, Young Frankenstein, should be every bit as successful.
Full of the visual wit and verbal slapstick that Brooks is famous for, the new movie is actually a polished, near-perfect parody of James Whale's 1931 Frankenstein, the film that featured Boris Karloff as The Monster.
Now that's real praise. Unlike burlesque, a broad and unsubtle kind of farce, parody is very difficult to do well.
And, although every TV variety show attempts them, movie parodies seldom succeed.
When they fail, it's usually because the comedy writer failed to understand the work that inspired his parody. As in cartoon caricature, the art lies in maintaining a likeness while exaggerating slight excesses into humorous commentary.
This is something that Brooks, a former TV gag writer, manages to do with almost off-handed ease. Filmed in black and white, his Young Frankenstein will absolutely astound vintage horror fans with its fidelity to the look, the sound, the rhythm and the feel of the Universal Studios originals.
The new film stars Gene Wilder, who co-authored the movie's screenplay with Brooks. A charter member of the director's stock company, Wilder was seen as the nervous accountant in Brooks's The Producers (1967) and as the alcoholic gunman in Blazing Saddles.
Here, he plays Dr. Frederick Frankenstein, a medical-school lecturer who insists on pronouncing his name "Fronk-en-steen." When a student asks him about his celebrated relative's experiments in revivification, he replies defensively that "my grandfather was a very sick man."
Nonetheless, when he falls heir to the family estates in Transylvania, young Frankenstein bids farewell to his fiance Elizabeth (Madeline Kahn, currently [1975] a best supporting actress Oscar nominee for her work in Blazing Saddles), and sets off for Middle Europe.
Waiting there for him is a cheerful little hunchback named Igor (British comedian Marty Feldman) who insists that "Fronkensteen" pronounce his name "Eye-gore."
A comely lab assistant named Inga (Teri Garr, who looks a lot like Flesh Gordon star Suzanne Fields) and a sinister housekeeper known as Frau Blücher (previous Oscar-winner Cloris Leachman), round out the household at Castle Frankenstein.
Naturally young Frankenstein finds himself drawn to his grandfather's laboratory. An exact duplicate of the one in which Colin Clive "built" Boris Karloff, it was reconstructed by set designer Kenneth Strickfaden, the man who created the original.
Therein he takes up his granddad’s work, and produces a Monster that bears a distinct resemblance to Marlon Brando (played by Peter Boyle, a talented actor and comedian who bears a distinct resemblance to Marlon Brando).
Horror fans nostalgic for the 1930s often point out that directors like Whale and Tod (Dracula) Browning knew the difference between creating fear and inducing disgust. Unlike many who have followed them, Brooks remains faithful to their  bloodless, essentially cerebral brand of horror.
Although his purpose is primarily comic, Brooks uses all of his resources, an arsenal that includes composer John Morris's classical-sounding music, massive, meticulous sets and atmospheric lighting, to give his film the proper texture, a tastefully dreamlike — Inga would say a “nachtmare” — mood.
Brooks’s film, running more than half an hour longer than the original, is built on scenes borrowed from a number of early Frankenstein titles, including 1935's Bride of Frankenstein and 1942's Ghost of Frankenstein (1942).
He turns one of the highlights of the 1935 film, the Monster's touching encounter with a lonely blind hermit, into a screamingly funny high point. Gene Hackman, appearing in a cameo role, plays the hermit, a gentle soul who overwhelms the wandering Monster with good-hearted but hopelessly blundered courtesies.
In another scene — one that was often censored out of the 1931 film — the Monster meets a little girl. In the original he ends up drowning her.
Here Brooks plays with his audience's expectations. When the child tells the Monster that they have run out of things to throw into the water, actor Boyle turns toward the camera, his face reflecting a mixture of distress and knowing . . .
Surprisingly, this is probably the gentlest, least outrageous film that Brooks has yet made — a result, perhaps, of his collaboration with Wilder. It is also his best.
Between them they certainly understand, and from the warmth of their parody I think it's fair to say they love, the old horror movies. Sometimes uneven as comedy, Young Frankenstein emerges as a great tribute to Hollywood's most magnificent monster.

Afterword: Sometime in the mid-1970s, I noticed a generational shift taking place in the popular culture. It came down to a simple question about a celebrated 19th century writer:  What is Shelley’s first name? If you asked any educated person over 30, the instant answer was Percy Bysshe, the English Romantic poet whose best buddy was Lord Byron. An educated younger person was more likely to answer Mary, author of the 1818 novel Frankenstein; or, The Modern Prometheus.
Today, of course, Mary is everybody’s answer. If Percy B. is remembered at all in our high-tech, sci-fi society, it is as the bad boy poet (and married man) that the 18-year-old Mary ran off with in 1816. (They married later that year, some three weeks after the suicide death of Percy’s first wife Harriet.) The story of their summer on Lake Geneva — time spent in the company of Byron and his pregnant girlfriend Claire Clairmont (Mary’s 18-year-old stepsister) — has inspired at least three feature films, including director Ken Russell’s phantasmagoric Gothic (1986), Ivan Passer’s The Haunted Summer and Gonzalo Suárez’s Rowing with the Wind (both 1988). Each contains a version of the story-telling scene, a late-night gathering in which Mary’s contribution is the tale of a corpse re-animated, the first draft of Frankenstein.
Three years ago (2014), in the introduction to my review of Kenneth Branagh’s 1994 feature Mary Shelley’s Frankenstein, I called the the woman born Mary Wollstonecraft Godwin the mother of science fiction. Her story of a scientist who uses “galvanism” (electric stimulation) to create something like life predated the birth of such fathers of the genre as Jules Verne (born 1828) or H.G. Wells (1866). Today (August 30), on the 220th anniversary of her birth, a production of Mel Brooks’s 2007 Broadway musical adaptation of Young Frankenstein is preparing to move from a tryout run in the U.K.'s Newcastle upon Tyne to its September premiere in her home town, London.