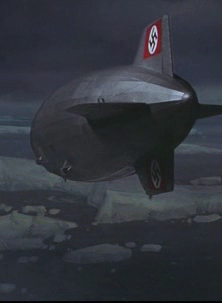 It was a mere 24 metres shorter than the RMS Titanic. The last flight of Germany's most famous airship is the subject of director Robert Wise's 1975 feature, The Hindenburg.


Era of the airship ends with a bang


Airships. Steampunk enthusiasts are keen on their aesthetic, appreciating the moment when they were seen as the future of air travel. In 1903, the year that the Wright brothers managed a 12-second, 36.5-metre powered "flight" in a heavier-than-air machine, the French airship Lebaudy had already managed the 74 km round trip from Moisson to Mantes and back, the first fully-controlled air journey. By 1908, the year Count Ferdinand Von Zeppelin founded his Luftschiffbau Zeppelin GmbH, Germany was the world leader in rigid airship technology. A year later, Deutsche Luftschiffahrts-AG (DELAG), the world's first commercial airline was founded, and by 1914 had carried more than 10,000 passengers on about 1,500 Zeppelin flights. During the First World War, DELAG ships were among those pressed into military service, and Zeppelins were used to bomb London. The lighter-than-air craft remained contenders well into the 1930s. Architectural historians note that the Art Deco spire featured atop New York's Empire State Building (opened in 1931) was designed as a mooring mast for airships, with the 103rd floor a landing platform for passengers. Faster than ocean liners, more luxurious than airplanes and most energy-efficient, dirigibles were a competitive form of long-distance travel. That all came to an end on this day (May 6) in 1937, a turning point in aviation history remembered in director Robert Wise's 1975 suspense thriller The Hindenburg.

Tuesday, December 23, 1975
THE HINDENBURG. Written by Nelson Gidding, Richard Levinson and William Link; based on the 1972 book The Hindenburg by Michael M. Mooney. Music by David Shire. Produced and directed by Robert Wise. Running time: 125 minutes. General entertainment. TIME IS HIS ENEMY. Luftwaffe Colonel Franz Ritter is aboard The Hindenburg to foil a saboteur. The German embassy in Washington has received word that the giant airship will explode over the United States, thus destroying an important symbol of ascendant Nazi power.
Time was also the enemy of producer-director Robert Wise. He knew that, historically, the aviation disaster took less than a minute. His problems in bringing the story of the great dirigible's destruction to the screen were threefold.
It is a matter of record that on the sixth of May, 1937, at almost precisely 7:25 p.m., the hovering dirigible exploded over Lakehurst, New Jersey. How does a moviemaker build suspense when everybody knows how the story comes out?
The Hindenburg's arrival in the U.S. was an event. Newsreel cameras were on the scene. Wlse's recreation has to conform to pictures many filmgoers had already seen.
Finally, there was that time factor. Virtually every other recent disaster movie has custom-tailored its catastrophe to feature length. Because such films as The Poseidon Adventure (1972), Earthquake (1974) and The Towering Inferno (1974) are not based on actual occurrences, they could sink, shake and bake at a pace convenient for the cameras.
The Hindenburg belongs to history and, historically, it was all over in less than a minute. Wise, the Academy-Award-winning director of West Side Story and The Sound of Music,  faced quite a challenge.
The Hindenburg, made at a reported cost of $15 million, is reasonably successful technically, less so dramatically. Based on Michael M. Mooney's book-length investigation into the unsolved mystery, Wise's film is a proper Christmas confection — expensive-looking and attractive but insubstantial.
Wise solved his first problem — tension-building — by changing the focus of the film, diverting our attention from the disaster itself. The Hindenburg opens with a lighthearted, square-screen newsreel recapping the history of flight through to the 1930s.
When the screen widens, going from black and white to colour, we are introduced to the Zeppelin called Hindenburg. Without missing a beat, it becomes serious, etching in the political situation with a series of rapid, documentary-like inserts.
Milwaukee: A letter is written warning that the airship will be destroyed over the U.S.A.
Washington: The letter arrives, much to the consternation of the German ambassador.
A Luftwaffe airdrome: Ritter, a German air force intelligence officer, newly returned from Spain, is handed his assignment.
Frankfurt: Officials of the Zeppelin Company, caught between political expedience and understandable concern, decide to let the threatened flight leave on schedule.
Faced with an inevitable ending, Wise has set detective Ritter the task of solving the mystery before the crime is committed. He set his screenwriter (Nelson Giddlng, from a story by Richard Levinson and William Link) the task of creating several solid suspects, and himself the task of keeping filmgoers interested in the process rather than the outcome.
The result is a formula collection of suspicious characters — among them a dispossessed countess (Anne Bancroft), a secretive American businessman (Gig Young), and a sinister gambler (Burgess Meredith) — all destined to play walk-on roles in an episodic, forgettable drama.
More memorable are the sets and special effects through which Wise recreated the world of the airship. Universal, the showmanlike company that produced Earthquake, seems determined to keep its thrill technicians challenged. They, in turn, have provided The Hindenburg with its best moments.
Some dangerous midair repairs, in which riggers must work outside the idling ship's hull, provide a mid-movie excitement break. The film's biggest achievement, though, is the final explosion.
In real life, it took just 34 seconds. Wise repeats those seconds over and over again, following virtually every member of the cast to his or her fate. When the explosion begins, his movie returns to stark newsreel black and white, an evocation of those iconic images shot on the scene.
The newsreel-like footage is used to punctuate and extend the disaster. As the flaming craft plunges to the ground, the picture is frozen several times. In the suspended moments, Wise traces the events occurring within.
It's effective, terrifying, and perhaps a bit overlong.
American actors, almost by tradition, are reluctant to compete with the scenery in a super-spectacle. Here, they go to no lengths at all to colour their stereotypical characters. Lacklustre performances are often the curse of big-budget productions, and there are no exceptions here.
Scott, a fine actor when he feels strongly about a project, was given the only fully-developed part in the piece. Rather than develop it further, he appears to have stiffened his neck, gritted his teeth and walked through, secure in the assurance that no one would really notice.
Unfortunately, his co-stars did notice, and almost all of them — the exception is young William Atherton, impressive as the troubled rigger Karl Boerth — adopt the same attitude: Take the screen credit and run.
Reduced to essentials, The Hindenburg is a spectacular melodrama. A llghter-than-alr vehicle for its stars, it is little more than a skillfully crafted holiday distraction.

Afterword: Composer David Shire produced one of his most beautiful scores for The Hindenburg. No surprise, really, since the man calling the shots, Robert Wise, had an ear for music, having won his two best director Oscars for West Side Story (1962) and The Sound of Music (1966). Well into his fourth decade of helming Hollywood movies, Wise was still trying new things. In The Hindenburg, he managed the feat of making the airship a character in his drama, a trick he would repeat four years later with the starship Enterprise, a principal player in his Star Trek:The Motion Picture. As in almost every movie "based on a true story," there is considerably more fiction than fact in The Hindenburg's screenplay. Despite years of theorizing by scientists and historians, the cause of the accident has never been conclusively established.
It's not just steampunk aficionados who believe we are due for a revival of the airship. Reporting from Vancouver's Expo 86, Britain's New Scientist magazine highlighted "Canada's latest contribution to air travel," the Hystar, described as "a cross between an airship and a helicopter." Though little has been heard of Hystar since, a 2014 feature on Smithsonian.com details a $40-million U.S. project to build a Zeppelin-like freight transport. Among the features that make airships a future worth returning to is their energy efficiency, something that becomes ever more important in the twilight of the fossil-fuel era.