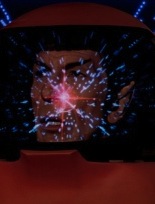 In a moment recalling Astronaut Bowman's journey through the stargate in 2001: A Space Odyssey, Science Officer Spock (Leonard Nimoy) mind-melds with the entity V'Ger, in director Robert Wise's Star Trek: The Motion Picture.


Engineers or artists? There was a moment in the evolution of science fiction as a literary form when thoughtful readers argued whether the genre's best works were written by authors who were biased in favour of "hard science" or pure imagination. A similar debate occurred in the film world, where critics debated the question of craftsman versus auteur. Directors were rated for their ability to impose an individual style on their feature films. Robert Wise ranked among the great craftsmen, a man who worked his way up from Oscar-nominated film editor (for 1941's Citizen Kane) to Oscar-winning producer/director (for 1961's West Side Story and 1965's The Sound of Music). Born on this day (September 10) in 1914, Wise made up for his lack of personal flamboyance with an ability to deliver solid entertainment, regardless of genre. Though only three of his 40 theatrical features fall into the sci-fi category, each was a landmark achievement in the maturation of its screen form. In 1951, his The Day the Earth Stood Still demonstrated that UFOs and serious social issues were not incompatible. Twenty years later, his adaptation of Michael Crichton's best-selling The Andromeda Strain (1971) was a "hard science" thriller that offered sober shocks within a rising tide of issue-laden SF. Today, Reeling Back recalls 1979's Star Trek: The Motion Picture, Wise's last major feature and the first of the long-running movie franchise.

The above is a restored version of a Province review by Michael Walsh originally published in 1979. For additional information on this archived material, please visit my FAQ. LINK

Afterword: Although I found much fault with the first Star Trek feature, that didn't stop me from going after the Famous Players theatre chain for not presenting the picture to its best advantage. Looking back on that column today, I can't help being nostalgic for a time when the famous "firewall" between newsroom and ad sales was real, and that a critic could take a major advertiser to task on the same page as his ads appeared. Rereading the review portion of the article, my reference to F Troop, a 1965-1967 TV comedy series about a dysfunctional U.S. cavalry outpost on the western frontier, now seems pretty obscure. What really surprised me, though, was the complete lack of any reference to Jerry Goldsmith's awesome score (for which the composer received an entirely deserved Oscar nomination). Goldsmith (who died in 2004) wrote some of the greatest film music every recorded. His rich and varied STMP themes set the style for every Trek feature and TV series that followed after. If the picture's screenplay set a standard for sci-fi silliness, Goldsmith set new standards in musical excellence that more than compensated.