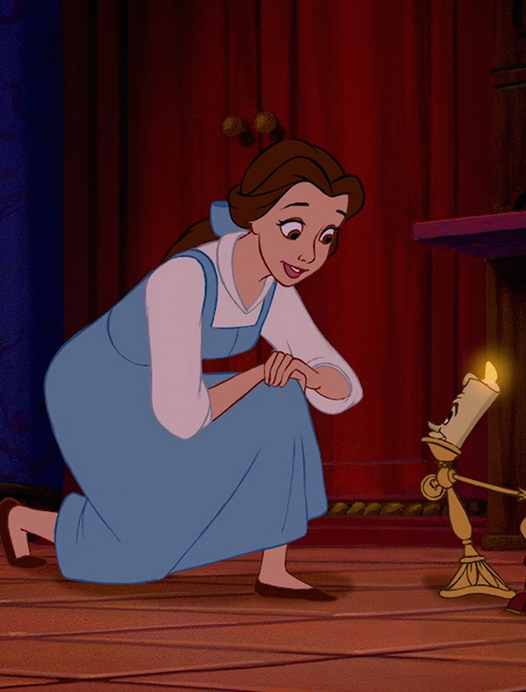 Belle (Paige O’Hara) confers with the candlestick Lumiere (Jerry Orbach) in the 1991 animated feature Beauty and the Beast .


Born on this day (April 26) in 1711, Jeanne-Marie Leprince de Beaumont pioneered the use of folk tales in education. During 15 years working as a governess in London, she penned the version of La Belle et le Bête that inspired the 1991 Disney feature Beauty and the Beast .

BEAUTY AND THE BEAST. Written by Linda Woolverton. Based on La Belle et le Bête (1756) by Jeanne-Marie Leprince de Beaumont. Music by Alan Menken. Songs by Howard Ashman. Directed by Gary Tronsdale and Kirk Wise. Running time: 84 minutes. General entertainment. 'TIS THE SEASON TO be jolly.
Broadcasters Gene Siskel and Roger Ebert were in a particularly jolly mood the day they saw Beauty and the Beast. "It's a legitimate candidate for Oscar consideration for Best Picture," they reported to viewers.
Say what? It's time for a small reality check.
Beauty and the Beast is a cartoon. An adequate, if uneven, retelling of a traditional French folk tale, it comes to us from the Disney cartoon factory.
Once upon a time, there was a golden age of feature animation. It ran from 1937 to 1955 and was bounded by the first and final true Disney classics, Snow White and the Seven Dwarfs  and Lady and the Tramp.
Today [1991], we are deep into an era of lesser works. Call it the silver age. Depending upon your particular bias, it began either in 1972 (with maverick animation auteur Ralph Bakshi's Fritz the Cat) or 1982 (with dedicated craftsman Don Bluth's The Secret of NIMH).
The differences between the two ages are real and striking. The best of the golden age films are works of collaborative genius in which everything works to create magical, timeless fantasies.
Today's cartoons, technical advances notwithstanding, have yet to get it together artistically. Too often they are conceived as products, with advertising hyperbole substituting for imagination and formula incident for real storytelling.
Listen to Don Hahn, producer of the greeting-card-shallow Beauty and the Beast: "We felt the need to energize the story by creating more dramatic scenarios."
That, I guess, is Hollywood producer talk for "we turned every character into a whining, self-absorbed adolescent twit, and expressed every conflict in terms of physical violence."
Screenwriter Linda Woolverton "energizes" the storyline with a lust triangle. At the apex is dreamy village girl Belle (voiced by Paige O'Hara).
Because she is "the most beautiful girl in this town," muscle-headed village hunk Gaston (Richard White) reasons that she is "the best. And I deserve the best."
Soon to enter the picture is Beast (Robby Benson). Once a rude young prince, he was put under a spell several years ago by an itinerant enchantress.
Belle's father (Rex Everhart), an inventor and the local loon, encounters the Beast, the discourteous master of a bewitched castle. Belle saves her dotty dad by agreeing to take his place as permanent "guest" of the tyrannical creature.
To break the spell, Beast must find someone who will love him for himself. Meanwhile, Gaston plots Belle's "rescue."
This "more dramatic scenario" includes six sappy songs, a selection of unmemorable tunes and snappy, plot-thickening lyrics.
When, for example, Belle sits down for her first meal in the castle, the place settings put on a show. "Be our guest," sings Lumiere (Jerry Orbach), the host candlestick ". . . nobody's complaining  / while the flatware's entertaining."
Later, the townsfolk form a mob to kill the Beast, vowing "we won't rest till he's deceased."
Admittedly, it is less actively offensive than 1989’s thoroughly plastic Little Mermaid.  The actual animation work is quite competent throughout.
The reality, though, is an ambitious bit of market-oriented, silver-age advertising art. It's good, not great.

Afterword: What can I say? It was Christmas, and I was in a generous mood. Had I been feeling snarky, I would have pointed out that the syndicated TV show Siskel & Ebert at the Movies was a production of Buena Vista Television, a unit of Walt Disney Pictures, the producer and distributor of Beauty and the Beast. It seems that Oscar consideration for its animated features was something of a corporate objective for the Disney marketing division, one that it achieved on February 19, 1992, when B and the B was among the nominees for Best Picture. (The award went to The Silence of the Lambs, a live-action feature with a somewhat similar fine-dining theme.)
In retrospect, perhaps I was the one in need of a reality check. The entry of companies such as Pixar (with 1995’s Toy Story) and DreamWorks Animation (1998’s Antz) into the production mix added to the pressure on the market-savvy Academy to adjust its thinking on the value of cartoons to its promotional mandate. In 2001, the Oscar for Best Animated Feature made its debut. Given the prominence of computers in the production process, we probably should call this the silicon age of animation.
In addition to its distinction as the first cartoon feature nominated for a best picture Oscar, Beauty and the Beast was the first to make it to Broadway. In 1993, a Disney Theatrical Productions unit was spun off from the Disney Theatrical Group (best known for its Disney on Parade and Disney on Ice arena shows). Its first project was the B and the B stage musical. Premiered in 1994, it ran for 13 years, or 5,461 performances. Currently, Disney seems intent on recycling its entire cartoon library as live-action features (a corporate strategy that has as much to do with copyright extension as audience nostalgia). B and the B returned to movie screens in 2017 with Emma Watson (Hermione Granger in the Harry Potter films) singing and dancing amidst all the CGI.