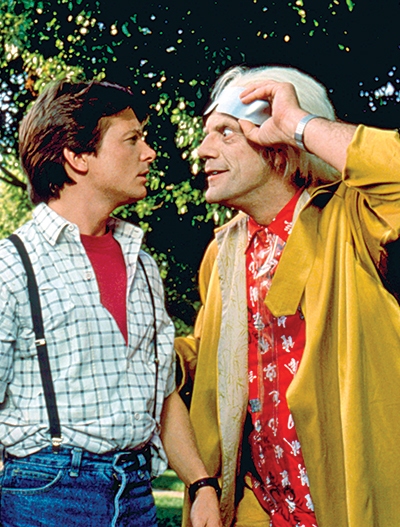 Having been to the past to fix the present, Marty McFly (Michael J. Fox) receives the news from Doc Brown (Christopher Lloyd) that there are problems in his future, in 1989's Back to the Future Part II.

Back to a darker Future


History rewritten to add shocks to the awe


It's the day after Canada Day (July 2), and to mark the occasion Reeling Back offers three more polite cheers for another uniquely Canadian entertainment tradition, the three solitudes. From the moment in 1967 that the national government created a federal agency to "foster the commercial, cultural and industrial success" of film production, its vision was restricted to French-language cineastes (in Montreal) and English-language movie-makers (in Toronto). Aspiring filmmakers in Vancouver, some 3,360 km west of Toronto (and 2,000 km north of Los Angeles) had another idea. Ottawa's indifference notwithstanding, the West Coast province was determined to make its presence felt. By the year 2000, it was the second-largest film and television production centre in North America. (The people and the pictures they produced are a big part of the story that Reeling Back is here to tell.) Performers who took their first steps to fame in Vancouver include Edmonton-born Michael J. Fox, who made his acting debut at the age of 12 in the much-celebrated B.C. television series The Beachcombers. Yesterday, we recalled his Hollywood breakthrough feature Back to the Future. Today we'll applaud his triple-header Hollywood success, the story that continued with 1989's Back to the Future Part II.

Thursday, November 23, 1989.
BACK TO THE FUTURE PART II. Written and co-produced by Bob Gale. Music by Alan Silvestri. Directed by Robert Zemeckis. Running time: 108 minutes. Mature entertainment with the B.C. Classifier’s warning: occasional coarse language. NOVEMBER 12, 1955. It was the night of the Enchantment Under the Sea dance at Hill Valley High, the night that George McFly (Crispin Glover) found his courage and Lorraine Baines (Lea Thompson) her density.
It was also the night that lightning struck the town hall clock tower, providing the 1.21 gigawatts of power necessary to send time traveler Marty McFly (Michael J. Fox) Back to the Future.
Darned if it’s not also the day that an elderly Biff Tannen (Thomas F. Wilson) returns from the year 2015 to press a future-shifting gift upon his younger self.
From the ruins of his workshop in an anarchic, alternative 1985, Dr. Emmett Brown (Christopher Lloyd) attempts to make sense of it all. Perhaps, he says in a frenzy of speculation, the date is “a temporal junction point on the space-time continuum.
“On the other hand,” he suggests, momentarily calm, “it could be just a coincidence.”
Coincidence? Story collaborators Bob Gale and Robert Zemeckis laboured long and hard to manage this paradox-fraught conjunction. In the process, they brought forth Back to the Future Part II, the second film in an already completed film trilogy. (Part III arrives May 25, 1990).
Fast and full of independently funny bits, it is a true sequel. A picture that extends and depends upon the screenwriting partners’ original screwball hit, it opens with the 1985 film’s final scene.
“How about a ride, mister?” Jennifer Parker (Elizabeth Shue, replacing Claudia Wells) says to the returned-from-the-past Marty. Their reunion is interrupted by Doc Brown, who arrives in his customized DeLorean to take us all on a breathless ride into the world of 2015.
There, their efforts to straighten out Marty’s aimless son Marty Jr. (Fox, who also plays Marty’s older self and his daughter Marlene) cause complications that reverberate down through time and forward again.
“There’s something very familiar about all this,” 2015's Biff says, after Marty reprises his skateboarding adventure in future Hill Valley’s town square.
Indeed there is. A skilled comic technician, director Zemeckis offers fantasy fans an imaginative remake of his first film. Together with Gale, he has developed a plotline that layers actors in multiple roles, playing characters who encounter themselves in an effort to bend time.
Here, though, their motives are darker and the humour more violent. The pleasure in this particular cast reunion is dampened by surprisingly dark feelings as Zemeckis explores the possibility of alternate time strands.
To do this, he has intensified bullying Biff into a mean, even murderous villain, a development that undercuts the beguiling innocence of the original. Though actor Lloyd’s marvellously mad scientist is hilarious throughout, Part II is a picture with a nastier — and, dare we say it, more true to life — edge.

Afterword: Though not the first time-travel movie — that honour goes to a A Connecticut Yankee in King Arthur's Court, a 1921 silent adaptation of the Mark Twain fantasy novel — 1985's Back to the Future may be the most beloved. It came at a time when science-fiction films were attracting serious attention and significant budgets, which together translated into big box-office returns. In 1968, director Franklin Schaffner's Planet of the Apes (starring Charlton Heston) generated two sequels (1970 and 1971), and a 14-episode television series (1974). Variations on the time-travel theme were at the core of Nicholas Meyers's imaginative Time After Time (1979), inspired by H.G. Wells's influential 1895 novella The Time Machine; Don Taylor's seriously silly The Final Countdown (1980); Terry Gilliam's wonderfully fantastic Time Bandits (1981); and James Cameron's game-changing The Terminator (1984). In 1985, the year Back to the Future was released, filmgoers had their choice of four time-travel pictures, with five more to come in 1986. What had been a rarity before the 1980s has became a commonplace, both in theatres and on television. And it's due, in large measure, to Dr. Emmett Brown's timely invention of the flux capacitor.