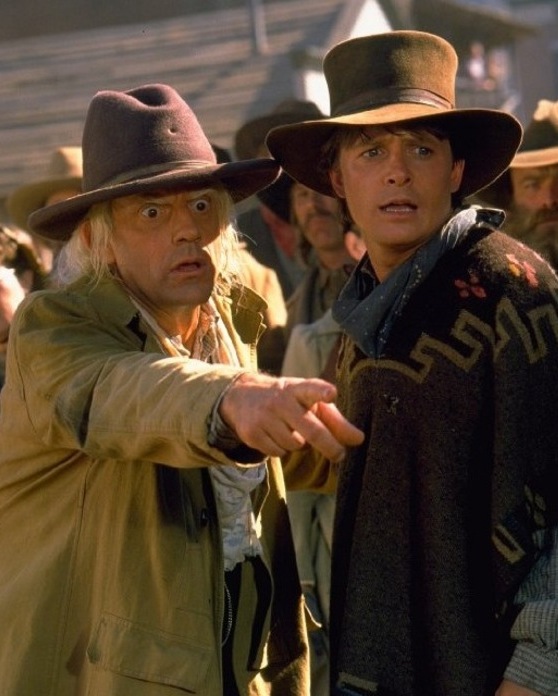 Doc Brown (Christopher Lloyd) points out to Marty McFly (Michael J. Fox) that the future is not set in stone, in Back To The Future Part III (1990).


Reconnecting with our inner cowboy


It's two days after Canada Day (July 3), and to mark the occasion Reeling Back offers a final three polite cheers, this time to celebrate our nation's colonial past and future, a not entirely comic tale some 150 years in the making. Created by an act of the British Parliament (the British North America Act) on July 1, 1867, the Dominion of Canada did not become fully independent until 1931, the year that that same foreign legislature passed the Statute of Westminster. Even so, Canadian passports proclaimed "a Canadian citizen is a British subject," and Canada remained loyal to the British Empire until that institution collapsed after 1945. For the next 35 years, Canada flirted with sovereignty, during which time it raised its own flag (1965) and, under the British Parliament's Canada Act (1982), "repatriated" its constitution. Ultimately, though, our deep-seated colonial instincts prevailed. In 1990, Canada gave in to the irresistible pull of the American Empire, deploying forces to the Arabian Gulf (and later Afghanistan) to serve the interests of the new imperial power. Reeling Back's 2014 Canada Day observance has focused on the Back to the Future film trilogy. Today we conclude with the big finale, a return to that most American of movie genres, the Western, in 1990's Back to the Future Part III.

Friday, May 25, 1990.
BACK TO THE FUTURE PART III. Written by Bob Gale. Music by Alan Silvestri. Directed by Robert Zemeckis. Running time: 118 minutes. Mature entertainment with the B.C. Classifier’s warning: occasional coarse language. TIMING IS EVERYTHING.
At precisely 10:04 p.m., lightning strikes the old clock tower of the Hill Valley town hall, generating the 1.21 gigawatts of electrical energy necessary to propel Dr. Emmett Brown’s customized DeLorean Back to the Future.
The timing was right. The comedy hit of 1985, director Robert Zemeckis’s brilliant time-travel fantasy was a tale complete unto itself.  Having altered the space-time continuum for the better, teenager Marty McFly (Michael J. Fox) returned from 1955 to find his family and family circumstances much improved.
In a coda, meant more as a joke than a promise, Doc Brown (Christopher Lloyd) reappeared from the year 2015 to urge Marty on to further adventures. The fact that Back to the Future became a major box-office success — it was its year’s top-grossing movie — insured that audiences would see more of McFly.
Last November, Back to the Future Part II opened, continuing the narrative with hardly a pause for breath. Together with his screenwriting partner Bob Gale, Zemeckis had stretched their original feature into a trilogy. On the day that Part II arrived in the theatres, today’s date [Friday, May 25, 1990] already was fixed on exhibitors’ booking sheets for the Back to the Future Part III premiere.
The timing is perfect for V-Con 18, Vancouver’s annual science-fiction convention, also opening today. Zemeckis’s rousing final chapter fits right in with the fan gathering’s 1990 theme: Worlds of Fantasy.
Zemeckis, whose previous flights of imagination include the action-filled Romancing the Stone (1984) and the epic cartoon thriller Who Framed Roger Rabbit (1988), has carved out a special place for himself in the fantasy-film world.
In expanding his Back to the Future universe, he takes the notion of a trilogy seriously. At the same time, he uses it to have fun with the science-fictional idea of alternate time streams.
Like a composer working variations on a musical theme, he reshapes and recalls the original film’s incidents and characters. A dark, transitional passage, Part II ended with Marty McFly stuck in 1955. That picture’s coda had “future boy” Marty reappearing on foot in Hill Valley’s main street moments after the DeLorean disappears. “I’m back from the future,” he announces breathlessly.
It’s now 10:03 p.m. on Saturday, November 12, 1955. For the third time in as many movies, lightning strikes the clock tower. On this round, though, Zemeckis is offering a sunlit, upbeat adventure, a relaxed, nostalgia-soaked return to the thrilling days of yesteryear.
Our 1985 Doc Brown is stranded in Hill Valley’s frontier past. With the help of 1955’s Doc Brown, Marty is able to join his mentor in 1885 for an exploration of their shared pioneer roots.
Zemeckis, an artist with a remarkable breadth of vision, takes a real chance here. In Part III, much of the film is pitched to an older generation of filmgoers, people who respond viscerally to Monument Valley vistas and the mythic pacing of classic Westerns.
Midway through, I got the feeling that the kids in the audience were sitting on their hands, unmoved by the marvellous use the director was making of the traditional movie milieu. Then, suddenly, there was a buzz of recognition.
Though unexcited by the presence of cameo players Pat Buttram, Harry Carey, Jr., or Dub Taylor in the town saloon, the teens got with it when some bearded musicians showed up to play period dance music for a town celebration.
ZZ Top, you say?
Who knew?
Part III poses the question “is the future carved in stone?” Before leaving 1955, Marty discovers Doc’s grave marker. Engraved on the stone is “shot in the back” on September 7, 1885. His murderer was Buford “Mad Dog” Tannen (Thomas F. Wilson), the villainous Biff’s outlaw ancestor.
In the course of the adventure, Marty encounters his own forebears, Irish immigrants Seamus (also Fox) and Maggie McFly (Lea Thompson). The focus of the story, though, is Doc’s unexpected romantic involvement with schoolmarm Clara Clayton (Mary Steenburgen).
The sci-fi sophisticates gathering this weekend at UBC’s Totem Park will have fun with this one. Actress Steenburgen, they will recall, made her film debut in the Jack Nicholson Western Goin’ South (1978), in which she spurned a character played by none other than Christopher Lloyd. Later, she would become involved with a time-traveling H.G. Wells in the Nicholas Meyer fantasy Time After Time (1979).
Zemeckis’s film also bears a generic resemblance to 1982’s Timerider, a picture co-written by Stephen Spielberg associate William (Harry and the Hendersons) Dear. In that feature, a modern-day biker is zapped into a frontier past to fulfill his destiny.
Accomplished and involving in the working out of its destiny, Zemeckis’s big finale strikes all the right notes for the 1990s. Continuously inventive if more relaxed, Back to the Future Part III makes good on its promise of a good time.

Afterword: Once a basic American movie genre, the Western ceased to be a regular part of every studio's production schedule in the 1960s. Part of the reason was television. That medium quite exhausted the genre with a glut of oaters that peaked in 1959, the year that featured 26 Westerns in the prime-time broadcasting schedule. More important, though, was the fact that a once-rural nation had become urban, a more complex society that found duster metaphors passe. (Today, science fiction occupies the market niche vacated by the Western.) Even so, film-makers love the Old West with burning passion, and a director will use any excuse to put a Western on his resume. Over the years that list has included such quintessentially urban directors as Robert Altman (McCabe and Mrs. Miller, 1971; Buffalo Bill and the Indians, or Sitting Bull's History Lesson, 1976); Michael Crichton (Westworld, 1973); Mel Brooks (Blazing Saddles, 1974); Richard Lester (Butch and Sundance: The Early Days, 1979); John Landis (Three Amigos, 1986); Ron Howard (Far and Away, 1992; The Missing, 2003); Michael Mann (Last of the Mohicans, 1992); Lawrence Kasdan (Silverado, 1985; Wyatt Earp, 1994);  and the Coen brothers (True Grit, 2010). Robert Zemeckis, who added his name to the list with Back to the Future Part III, was the subject of an homage last month, when Doc Brown (Christopher Lloyd) and his DeLorean played a cameo role in Seth MacFarlane's 2014 summer comedy A Million Ways to Die in the West.