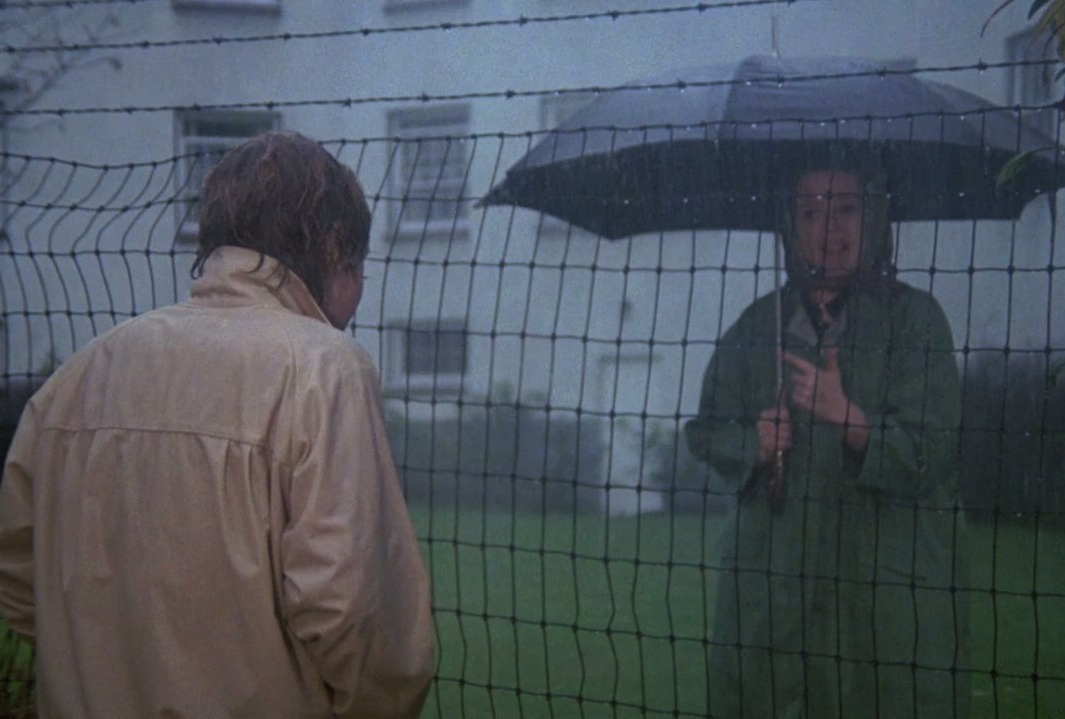 Under Robert Altman's direction, Michael Burns and Sandy Dennis endured the Vancouver rain while filming That Cold Day in the Park.


In Part 4 of a seven-part series, Reeling Back recalls the features shot in the decade in which Vancouver finally began its rise to prominence as an international film-making centre.

FEATURE FILMS MADE IN VANCOUVER AND BRITISH COLUMBIA
Prepared for Chuck Davis and The Vancouver Book — August,  1975
By MICHAEL WALSH
[PART 4: 1932-1969]

JOHNNY STOOL PIGEON (drama, 1949); w. Robert L. Richards; d. William Castle; l.p. Howard Duff, Shelley Winters, Dan Duryea, Tony Curtis. A gangster (Duryea) is released from Alcatraz on the condition that he will lead a U. S. Treasury agent (Duff) to some drug-trade kingpins.
Vancouver is represented as the drug rlng's northern connection. A brief scene was shot at the foot of Granville Street in this otherwise American movie.

THE SWEET AND THE BITTER (drama, 1962): w./p./d. James Clavell; l.p. Yoko Tanl, Paul Richards, Torin Thatcher, Jane Mallet, Peter Haworth, Teru Shimada, Sam Payne. To avenge the death of her father in a wartime internment camp, a Japanese girl (Tani) immigrates to Canada, where she targets the Canadian businessman (Thatcher) who stole her father's fishing boat, but falls in love with his son (Richards) instead. Released in the U.S. as SAVAGE JUSTICE.
Hopes for a local film boom were rekindled with the making of this social-justice drama. Locally financed, it was produced by the same company (Commonwealth Productions) that built West Vancouver's $1.5-million Panorama Studios. It remained unseen until 1967, then premiered to damning reviews at Vancouver's Orpheum Theatre. The Australian-born Clavell went on to a more successful career in England where he wrote, produced and directed the 1966 Sidney Poitier film, To Sir With Love.

THE BITTER ASH (drama,1963): w./p./d. Lawrence Kent; ph. Richard Bellamy; m. Jack Dale; l.p. Alan Scarfe, Lynne Stewart, Phillip Brown, Larry Kent, Douglas Reid. Would-be playwright (Brown) living in an off-campus world of drugs, sex and resentful despair, loses the love of his pregnant wife (Stewart) through his lack of feeling.
Made at the University of British Columbia with an all-student cast and crew, this was director Kent's first feature. A series of campus screenings and confrontations with censors across the country gave Kent national prominence, and he went on to make a second film . . .

THE TRAP (adventure-drama., colour, 1964): w. David Osborn; d. Sidney Hayers; l.p. Rita Tushlngham, Oliver Reed, Rex Sevenoaks, Barbara Chilcott, Linda Goranson, Brian Fairman, Walter Marsh. Sold to a burly trapper (Reed), a mute orphan girl (Tushlngham) is carried off into the woods. Although she longs to return to the relative civilization of the frontier settlement, she stays to nurse him after he crushes his leg in a trap, eventually coming to love him.
Hope grew for that elusive film boom with the making of this Anglo-Canadian co-production, a film that featured international stars Reed and Tushingham acting alongside local performers.

THE PLASTIC MILE (drama, 1969): w. Phil Surguy;  ph. Dan Singer; d. Morrle Ruvlnsky: l.p. Jace Vander Veen, Pia Shandel, Beverlee Miller, Noel Burton, Sylvia Spring. A movie director (Vander Veen) faces a life crisis during the filming of an erotic film. A re-edited version with some new footage added was released in 1972 as THE FINISHING TOUCH; also known as SHE'S A WOMAN.
The focus of a public censorship crisis at the last [1969] Vancouver International Film Festival, The Plastic Mile is often blamed for killing off that annual event. Told that B.C.'s film censor had ruled that his film could not be screened as submitted, director Ruvinsky carried a print of the feature into the festival auditorium, cut it apart and distributed the pieces to a sympathetic audience recruited for the occasion.

THAT COLD DAY IN THE PARK (drama, colour, 1969): w. Gillian Freeman, based on the novel by Peter Miles. ph. Laszlo Kovacs; d. Robert Altman; l.p. Sandy Dennis, Michael Burns, Susanne Benton, Luana Anders, John Garfield, Jr. A lonely, well-to-do spinster (Dennis) invites a young man (Burns) in out of the rain to begin an intense, ultimately tragic relationship.
Director Altman's effusive promotion of Vancouver as the place to make movies, combined with the foundation, late in 1967, of the federal government's Canadian Film Development Corporation, led people to conclude that the long-awaited film boom was finally at hand. The park of the film's title is Kitsilano's Tatlow Park, stretching south from Cornwall just west of Macdonald.

GREAT COUPS OF HISTORY (docu-drama, 1969): w./p./d. Jack Darcus; ph. Terry Hudson; m. John Gray; l.p. Delphine Harvey, Ellis Price-Jones, Janie Cassie, Ted Sutton. A middle-aged woman (Harvey) reminisces about the social and sexual "coups" in her past, and sets out to prove that she is still capable of new conquests. Meanwhile, her teen-aged daughter (Cassie) attempts to come to terms with her own budding sexuality.
A Vancouver painter and set designer, Darcus followed the example of Larry Kent and drew upon the university community for technical support in the making of his first feature. Like Kent, he would go on to make several interesting, low-budget features locally.
The above is Part 4 of a seven-part restoration of a Vancouver Book article by Michael Walsh originally published in 1976. For additional information on this archived material, please visit my FAQ.

Afterword: The Vancouver International Film Festival (VIFF) referred to in the note on The Plastic Mile (1969) was first held in 1958 as part of the city's first International Festival of the Arts. It was founded by the non-profit Vancouver Festival Society and its various juried competitions included cinema notables such as Gratien Gelinas, "Budge" Crawley, Milos Forman, John Grierson, Claude Jutra, Pauline Kael and Andrew Sarris as panelists. By 1960 it was the largest film festival in North America but, after 1963, funding became increasingly difficult to find. The end came in 1969 when the acrimony over The Plastic Mile precipitated the already financially troubled organization's collapse. in 1982, after the 1976 publication of the original Vancouver Book, a local showman, Leonard Schein, revived the VIFF name for an 18-day commercial film showcase held at his Ridge Theatre. Incorporated as a non-profit society in 1983, and directed by Alan Franey since 1988, it has grown into North America's third largest film festival.