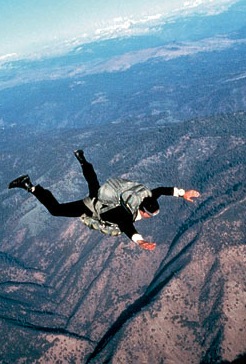 J.R. Meade (Treat Williams's stunt double) exits his flight to Portland with $200,000 and a feat of derring-do that sets off the action in director Roger Spottiswoode's The Pursuit of D.B. Cooper (1981).

Getting away with it all


It's said that the day before the November Thanksgiving holiday is the busiest day of the year for air travel in the U.S. Apparently that's not true, but it probably feels that way for people headed for family gatherings they'd rather not attend as they endure the ever-less pleasant security protocols that have become a permanent part of the experience. On Monday (November 23), CNN reported that "security will be tight in the wake of terrorist attacks in Paris and the suspected bombing of a Russian passenger plane [in Egypt]," adding that "the Transportation Security Administration has 'doubled down' on security at [U.S.] airports, and wait times have gone up." The good news is that the new tablet technologies can provide idled travelers access to a universe of diversions. Entertainment awaits at the touch of a finger, though some discretion is advised. While the 1973 cartoon feature A Charlie Brown Thanksgiving is harmless enough, it would be wise to avoid such anxiety-inducing fare as 1972's Skyjacked or Snakes on a Plane (2006). Perhaps the best choice is the one that recalls the most celebrated Thanksgiving air traveler of them all. It was on this day (November 24) in 1971 that he exited Northwest Orient's Flight 305 somewhere over the Cascade Mountains, a story told in director Roger Spottiswoode's 1981 action-adventure The Pursuit of D.B. Cooper.

Wednesday, November 25, 1981.
THE PURSUIT OF D.B. COOPER. Written by Jeffrey Alan Fiskin. Based on the 1980 novel Free Fall by J.D. Reed. Music by James Horner. Directed by Roger Spottiswoode. Running time: 100 minutes. Rated Mature with the B.C. Classifier's warning: some coarse language and swearing; occasional nudity and suggestive scenes. THE PROVINCE CARRIED THE STORY exactly 10 years ago today [November 25, 1971].  A few hours earlier, on what was for Americans Thanksgiving Eve, a man calling himself Dan Cooper wrote himself into local legend.
An air pirate, Cooper took off from the Sea-Tac airport on November 24, 1971, in a Boeing 727. Carrying what turned out to be a fake bomb, he took command of the aircraft and extorted $200,000 of the airline's money (and two parachutes).
About 56 kilometres north of Portland, the 727's rear stairway opened and Cooper leapt out. Despite a massive manhunt, no trace of either the skyjacker or his loot has ever been found.
Who was he? Where did he come from? Why did he do it? What happened to him?
Nobody knows.
And since nobody knows, it's anybody's guess.
The Pursuit of D.B. Cooper is screenwriter Jeffrey Alan (Cutter's Way) Fiskin's guess.  Inspired by J.D. Reed's 1980 novel Free Fall, the film is the sort of tall tale that might be spun around a bonfire by the sleepy-eyed CITs of Camp North Star [in the 1979 feature Meatballs].
In Fiskin's version, Cooper is J.R. Meade (Treat Williams), a happy-go-lucky country boy from Jackson Hole, Wyoming. He's been kind of irresponsible for most of his life, but he really does love his pretty, hard-working wife Hannah (Kathryn Harrold). He's planned this skyjacking caper so that he can go home, hand her the money with a big "see-what-I've-done" grin, and take her off on a holiday.
Complication takes the form of Bill Gruen (Robert Duvall). A former Green Beret training sergeant, Gruen is the insurance investigator first on the scene when the 727 lands in Portland.
In less time than it takes to tell it, Gruen has deduced that Cooper must have been Meade. He remembers training the no-good, son-of-a-something-or-other, and he's off like a shot to track Meade down.
Too pat? Well, this is a tall tale, after all.
The idea is to play it broad and keep it funny.
It almost works.
Williams, who's done fine work in such unalike films as 1981's Prince of the City and Hair (1979), is a plus here. He has just the right amount of aw-shucks-ma'am ingenuousness to be appealing. Planned so that no one would get hurt, Cooper's crime is forgiven as a high-spirited prank.
Harrold, who made her feature debut opposite Nick Mancuso in 1979's Nightwing, is equally delicious. Her Hannah combines spirited self-reliance with the kind of stand-by-your-man loyalty beloved of country-and-western song writers.
She's just the sort of gal that a guy like Meade would do damn near anything to please. Come to think of it, her open,  inviting smile made me want to, well, see more of her in the movies.
Out of tune with the down-home tone is Duvall, a powerful actor whose presence is rather too lethal for this particular film. Although Gruen is written as a somewhat older version of Meade, Duvall's Apocalypse Now intensity suggests a stop-at-nothing single-mindedness not borne out by the storyline.
What the part calls out for is an actor with both a physical authority and a country-comic edge. Performers such as Kris Kristofferson, Gary Busey, Harrison Ford or the Hearts of the West Andy Griffith come to mind.
A lightweight effort, Pursuit was directed by former film editor Roger Spottiswoode,  the 36-year-old son of cinema theoretician Raymond Spottiswoode. Canadian-born Roger made his directorial debut last year [1980] with an indifferent Montreal-made tax shelter schlocker called Terror Train.
His current film is aimed at adventure-comedy fans, and it offers some well-done action sequences. A tribute to the picture's second unit crew and stunt personnel are a genuinely dangerous-looking white-water chase and a harrowing aircraft/automobile duel.
These bracket the film's more laconic moments, during which the characters make their way south in a series of rent-a-wrecks.
What really happened remains a mystery, of course. By turning some of the speculation into the stuff of legend, The Pursuit of D.B. Cooper arrives as a serviceable fall diversion.
*    *    *
D.B. COOPER? Universal Pictures is betting $1 million that he's dead.
To promote its picture, The Pursuit of D.B. Cooper, the studio is offering "a million dollars reward for information resulting in his arrest and conviction for aircraft piracy." I doubt that anyone in the Universal accounting office expects to see the company make that particular payout.
Even so, the offer is real. Turn in ol' D.B. before midnight, December 1, 1981, and Universal will send you $50,000 US a year for the next 20 years.

Afterword: No, the Universal Pictures reward offer did not result in any arrest or conviction. Indeed, it wasn't even much good as a movie promotion. The Pursuit of D.B. Cooper failed spectacularly at the box office (although the country and western-heavy soundtrack recording did well in its market niche). The man who did the deed has yet to be located or even positively identified, leaving the case open, the only unsolved air piracy incident in U.S. aviation history.
Ottawa-born Roger Spottiswoode first came to prominence as the film editor who cut director Sam Peckinpah's Straw Dogs (1971) and Pat Garrett & Billy the Kid (1973). Although his second directorial assignment, The Pursuit of D.B. Cooper, was essentially a job of work, his social conscience became apparent in his third theatrical feature, Under Fire (1983), a tale of American journalists on the ground during the 1979 Nicaraguan revolution. His 1988 filmed-in-Vancouver thriller Shoot to Kill played like a straight-ahead action picture, and he established his comedy credentials with funny fare such as Turner & Hooch (1989). Spottiswoode is currently working on an adaptation of James Bowen's 2013 bestselling memoir A Street Cat Named Bob, scheduled for release in 2016.