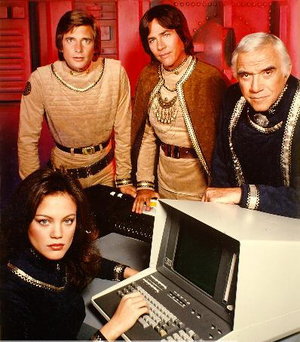 
Bonanza treks into the far beyond


Growing up in a company town, Hollywood High School graduate Glen Larson found work in the local business. A baritone, he was a founding member of The Four Preps, a pop quartet that collected three gold records between 1956 and 1964. Larson's subsequent success in television as a writer-producer owed much to his musical background. Though his critics accused him of stealing ideas, Larson appreciated the fact that there were only so many narrative notes, and the skill lay in their arrangement. He worked on McCloud (1970-1977), a series that repurposed ideas made familiar by the 1968 movie Coogan's Bluff. Larson went on to create Alias Smith and Jones (1971-1973), that shared themes with the 1969 hit Butch Cassidy and the Sundance Kid, while his Magnum P.I.(1980-1888) was an admitted homage to the 1960s cop show Hawaiian Eye. Ever aware of popular culture trends, he was among the first to see the potential in adapting comic-book stories to the small screen. In 1997, he set up shop in Vancouver to shoot two seasons of Night Man, based on the Marvel/Malibu Comics superhero. Born on this day (January 3) in 1937, Larson is probably best remembered for the television sci-fi epic so big that its pilot episode was premiered internationally as a feature film: 1978's Battlestar Galactica.

Afterword: Battlestar Galactica went to air as scheduled, but its winning ways cost a great deal of money. That, and the fact that in 1978 Universal Studious was sued by 20th Century Fox and Luscasfilms for copyright infringement, led to the show's cancellation after 24 episodes. Although the courts ruled in Universal's favour, the decision didn't come until August, 1980, 16 months after the decision to wrap production. There was a fan-inspired campaign, much like the one that had won a third season for Star Trek in 1968. The result was a three-episode mini-series, Galactica 1980, in which the story was brought to a close. A generation later, Larson's ideas were reimagined and updated in Universal Television's studios in Vancouver, B.C. A two-part mini-series premiered in December, 2003, followed by four full seasons of a successful new Battlestar Galactica (2004-2009). But wait, as they say in the late-night informercials, there's more. Two made-for-TV movies, Razor (2007) and The Plan (2009), broadened the narrative, and made possible the single season Caprica (2010) and Blood & Chrome (2012-2013), a single-season prequel. As for the future, the fan press reports that Bryan Singer, a director familiar with working in Vancouver, is keen on doing his own theatrical feature film based on the original 1978 series.