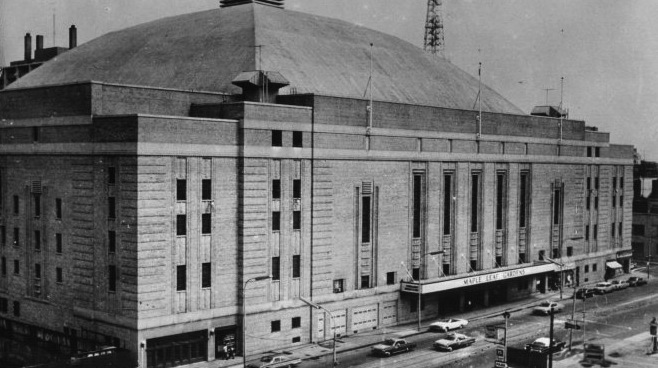 He Shoots, He Scores!


Stars taking their shots on goal


In a quiz cunningly linking today's National Canadian Film Day (April 29) with the ongoing National Hockey League playoffs, Reeling Back invites you to identify some movies in which the principal players lace on their skates and rag the puck.

HE SHOOTS, HE SCORES!

IT'S CANADA'S NATIONAL game. It's also the fastest, most exciting sport there is. Surprisingly, though, ice hockey has inspired only a handful of movies. In the quiz that follows, name the feature films in which the big screen stars play hockey:

Name the movies in which the following hockey stars act:

BONUS QUESTION:
Name the movie in which Charles Bronson coaches a hockey team.

Telefon (1977), in which Bronson's character, KGB Major Grigori Borzov, is introduced as the coach of a boys' hockey team in Leningrad.

The above is a restored version of Quiz 77, one of 78 included in The Canadian Movie Quiz Book by Michael Walsh, originally published in 1979. For additional information on this archived material, please visit my FAQ.

Afterword: American interest in hockey increased after the National Hockey League's expansion in 1967, that doubled its number of teams from six (clustered in Central Canada and the Northeastern U.S.) to 12, with all of the new franchises in the U.S. The film industry became involved in a big way in 1993, when the Walt Disney company founded the Mighty Ducks of Anaheim to play in the NHL's Pacific Division. Disney had already released a sports comedy called The Mighty Ducks (1992), and turned it into a trilogy with sequels in 1994 and 1996. In 2004, Disney released The Miracle, a celebration of the U.S. men's hockey team and its victory over the Soviet Union's team at the 1980 Olympic Games. The picture starred Kurt Russell and, yes, it was filmed in and around Vancouver, B.C.