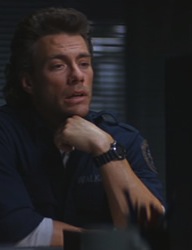 
The future of law enforcement

Friday, September 16, 1994.
TIMECOP. Written by Mark Verheiden. based on the graphic novel characters created by Mike Richardson and Mark Verheiden. Music by Mark Isham. Photographed and directed by Peter Hyams. Running time: 98 minutes. Restricted entertainment with the B.C. Classifier's warning: frequent violence, occasional nudity and suggestive scenes. LYLE ATWOOD (JASON SCHOMBING) is the ultimate inside trader.
On the morning of Oct. 30, 1929, he strides into his Wall Street office with a smile on his lips and a spring to his step. Though the dust has hardly settled from the devastating stock market crash, this moonlighting Timecop looks to the future with confidence.
On his desk is a copy of the day's Wall Street Journal. In his briefcase is his insider's edge, a copy of USA Today dated Oct. 30, 2004.
Ah, yes!. It's the old improve-on-the-future-by-altering-the-past trick.
Working his own efficient variation on Back to the Future, director Peter Hyams has in Timecop an able-bodied action fantasy. Its star, Jean-Claude Van Damme, plays Max Walker, an incorruptible agent of the ultra-secret Time Enforcement Commission.
Since time travel is an absolute impossibility, it is a potentially perfect vehicle for pure escapist fiction. Even fantasy needs ground rules, though, and screenwriter Mark (The Mask) Verheiden establishes his in the film's opening scenes.
First, travel is possible between the present and the past, but not between the present and the future. Second, your present and past selves cannot occupy the same space in time, so if you meet yourself in the past, don't touch!
The fun begins with the development of the technology sometime in 1994. The result of U.S. government-funded research, it falls under the oversight of a congressional intelligence subcommittee, one controlled by ambitious, technically imaginative Senator Aaron McComb (Ron Silver).
Secret monies are allocated to create the T.E.C., whose "timecops" will prevent the misuse of time travel by preventing all time travel. Unfortunately, not all of its agents are as honest as Max Walker.
Which brings us back to Wall Street in 1929. As Atwood plots his future investments, Walker, his ex-partner, materializes in the room to enforce the law.
Turns out that Atwood is working for someone very powerful in the world of 2004. He prefers to take a dive out the window rather than return to the present to give evidence.
Hyams's most entertaining movie to date, Timecop is in the dark, fun-with-your-paranoia spirit of his previous sci-fi features — 1977's Capricorn One (in which big government bureaucracies lie), 1981's Outland (big business corporations lie) and 1984's 2010 (big black monoliths probably lie).
Here, the not-so-secret message is that politicians lie big time. His arch villain is presidential candidate McComb, an amoral "conservative" determined to bring back Reaganomics.
"When I'm in office, it will be like the '80s again . . . the top 10 per cent will get richer, and the rest can move to Mexico." First, though, he has to get elected.
Because "elections are won with television," he's looting the past for his $50-million campaign fund. The trouble is, Max Walker is on to him.
In his own best movie to date, Belgian-born Jean-Claude Van Damme comes across as the most thoroughly likeable of Hollywood's action stars. He's also the most likely to succeed.
Guys go to his movies because he's a hard-bodied fighting machine. Their girlfriends will go along because Van Damme is cuter than Steve Seagal and a better actor than Chuck Norris. And he has a more appealing accent than Schwarzenegger.
That, together with solid special effects and a wistful lost-love subplot, make Timecop a bright late summer action-adventure.
*    *    *
Y'ALL COME BACK, NOW — Timecop is the third feature director Peter Hyams has shot in Vancouver. He first visited in 1989 to film Narrow Margin, a woman-on-the-run thriller starring Gene Hackman and Ann Archer.
He returned with John Ritter and Pam Dawber to film 1992's Stay Tuned. A comedy about life with "Hellvision," it demonstrated the local industry's ability to handle large-scale special effects fantasy features.

Afterword: Although we suspect he was inspired by science-fiction writer Poul Anderson's Time Patrol stories from 1960, credit for the creation of the Timecop character goes to comic book writer Mark Verheiden. He introduced the idea in a three-issue story called Man Out of Time in the 1992 anthology magazine Dark Horse Comics. Mike Richardson, the founder of the Oregon-based comic-book publishing house, took up the character and wrote both the screenplay of the 1994 movie, and the its two-issue comic book adaptation. The picture is remembered as the congenial Jean-Claude Van Damme's most successful feature film. On the other hand, a nine-episode Timecop mini-series, shot in Los Angeles in 1997 for ABC-TV, did little for the career of television actor Ted King.
Among other time-travel features shot in Vancouver, I've noticed that sci-fi fans are divided on the subject of 1996's Dr. Who. The first entry in the long-running series to be filmed outside of the U.K., the picture featured both Sylvester McCoy and Paul McGann as the time-hopping Time Lord. The fans seem to agree, though, on 2010's Hot Tub Time Machine. It's regarded as the genre's single greatest embarrassment. (Hot Tub Time Machine 2 was not shot in B.C, so we don't have to mention it at all.)
On a more positive note, I actually liked the single-season Primeval: New World (2012-2013) TV series. Spun off from a successful British show, it featured scientific adventurers dealing with time anomalies disgorging dinosaurs all over Greater Vancouver. My personal favourite, though, is Vancouver screenwriter Simon Barry's imaginatrive 2012-2015 series Continuum. Coming to the end of its run — the penultimate episode, The Desperate Hours, goes to air tonight (October 2) — it stars Rachel Nichols as Kiera Cameron, a corporate "Protector" from the year 2077, who becomes a reluctant timecop when she is blasted back to present day Vancouver, along with the members of a "terrorist" group called Liber8.
Many of Vancouver's long-running fantasy-based television series have had fun with the Groundhog Day time-loop trope. Stargate SG-1 (1997-2007) seems to have been the first to do it, with a 2000 episode called Window of Opportunity. Then comes Supernatural (returning on October 11 for its eleventh season). Its heroes, Sam and Dean Winchester, have often travelled in time, and were caught in a time loop in a manic 2008 episode, Mystery Spot. The five-season series Fringe (2008-2013) cheerfully bounced its F.B.I."Fringe Division" characters around in time and space within parallel universes. It offered its Groundhog Day variation in the 2010 episode White Tulip. Time-travel was not a major element on The X-Files during the five seasons (1993-1998) it was shot in Vancouver. Its own Groundhog Day episode (called Monday) was shot in 1999, after its move to Los Angeles.