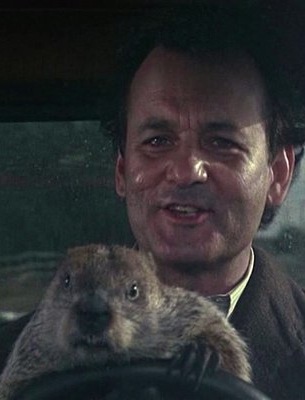 
The day that everything didn't change


It's been said that every dog must have its day and, since 2004, U.S. puppy partisans have recognized August 26 as National Dog Day. So, what about the rodent, that class of mammal that includes rats, squirrels, porcupines, beavers, guinea pigs and hamsters (but not bats, despite their being called Fledermäuse — flying mice — by the famously precise Germans)? As it turns out, our buck-toothed brethren are not entirely forgotten. The Germans, at least those resident in Hamelin, have long celebrated an annual Rat Catchers Day on June 26 in memory of the mythic Pied Piper. Since 2002, there's been a World Rat Day on April 4 to draw attention to their lovable qualities as pets. Nor can we forget that, on January 25, 2020, the Chinese calendar will click over to 4718, and we'll begin another Year of the Rat. Then there's the groundhog, celebrated for its powers of weather prediction, the critter's own way of marking Candlemas (the Feast of the Presentation of Jesus at the Temple on the Christian calendar). At some point today (Feb. 2), it will emerge from its burrow and, through its reaction to the the sunlight (or lack of it), pronounce spring to be imminent (or not). Around 1886, the entertainment-starved inhabitants of Punxsutawney, Pennsylvania, turned this moment into a celebration, gathering to observe their local rodent. This supremely silly custom inspired the unique 1993 comedy Groundhog Day, the film that gave new meaning to the phrase.

Friday, February 12, 1993.
GROUNDHOG DAY. Co-written by Danny Rubin, based on a story by Rubin. Music by George Fenton. Co-written and directed by Harold Ramis. Running time: 103 minutes. Mature with no B.C. Classifier's warning. ROD SERLING WOULD have made it spooky.

Witness a theological pronouncement, made over coffee in Punxsutawney, Pennsylvania. Mr. Phil Connors, a television weatherman not known for his spirituality, insists that he is “a god.”
Offered as evidence are his deaths, accomplished in a dozen different ways. Never released, he always wakes up at precisely 6 a.m. to relive Tuesday, February 2nd.
In the pantheon of minor deities, Mr. Phil Connors has dominion over Groundhog Day . . .  in The Twilight Zone.

Harold Ramis makes it kooky and lovably loopy.
Groundhog Day is not just his best work as a director, it’s the best time-travel fantasy since the original Back to the Future.
Goodness knows, we're all familiar with Phil Connors’s basic situation. It’s the old man-stuck-in-a-closed-temporal-loop plot.
Here, the man is a small-time television personality, played to self-centred perfection by Bill Murray. Together with pretty, upbeat field producer Rita Hansen (Andie MacDowell), he’s been sent to cover the annual appearance of weather prophet Punxsutawney Phil, America's most famous groundhog.
For smug, rodent-hating Connors, the day goes badly. Then, to his great annoyance, it goes badly again. And again. And again.
Working from a screenplay co-written with Danny Rubin, Ramis immediately extracts the maximum comic potential from Connors’s predicament. By the third time through “his” day, Connors has established that no one can help him.
Thereafter, he begins testing the possibilities of life lived without consequences. Because he can remember what he’s learned during previous cycles, he sets out to seduce Rita, using his endless supply of identical days to perfect his line.
Ramis, of course, can show us days going by in a blink. With each blink, there’s a funny moment, and each moment seems to bring the shallow Connors closer to his goal.
While he’s in selfish mode, though, he can never get it quite right. Amidst the well-timed gags, our hero begins to pick up on the fact that he does not live his day alone.
Though Ramis keeps the jokes coming, Murray shows us a character learning how to turn himself and his day around. Like last year’s Hero, Groundhog Day is at once a funny, romantic and winningly optimistic take on the human condition.

Afterword: More than a movie, Groundhog Day has come to be the very definition of a kind of movie. The popular culture website TV Tropes describes it as " A plot in which the character is caught in a time loop, doomed to repeat a period of time (often exactly one day) over and over, until something is corrected." Among the examples cited is the 1997 episode of Xena: Warrior Princess called "Been There, Done That." After that, I couldn't help but notice that Vancouver has become ground zero for science-fiction fantasy series using the Groundhog Day trope. So far the list includes The X-Files ("Monday," 1999); Stargate SG-1 ("Window of Opportunity," 2000);  Blood Ties ("5:55," 2007); Supernatural ("Mystery Spot," 2008); and Fringe ("And Those We Left Behind," 2011). Then there was the two season made-in-Vancouver series Tru Calling (2003-05), where the show's entire premise was based on temporal looping. Perhaps the biggest surprise is that the time-loop trope named for the feature film was actually used a full year earlier, in a1992 Star Trek: The Next Generation episode called "Cause and Effect," in which the Enterprise explodes over and over and over again.