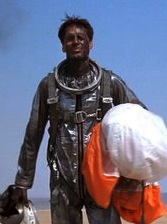 According to the author Tom Wolfe, military test pilot Chuck Yeager (Sam Shepard) was "the most righteous of the possessors" of The Right Stuff.

More than spam in a can


In the footsteps of Ham, the Mercury Seven


It was one small step for Ham, one giant leap for Ham's kind. This day (Jan. 31) in 1961 saw the launch of the first American into space. It was in response to Laika, the Soviet Union's own cosmo-canine, that the U.S. offered the world Ham, the astro-chimp. The four-and-a-half-year old hominid survived his 16 minute and 39 second journey to take his place in the popular imagination. (Just 10 weeks later, the Russkies upped the ante by putting an actual human being, air force Lieutenant Yuri Gagarin, into earth orbit for a 108-minute flight.) Ham's story would be recalled in movies and on television. In a fourth-season episode of Quantum Leap, for example, the time-travelling Sam Beckett "leaps" into the body of astro-chimp Bobo on Jan. 24, 1961. Ham's story, fictionalized in the 2000 feature Race to Space, was best told in author Tom Wolfe's 1979 best-seller The Right Stuff. Wolfe went on to quote top air force test pilot Chuck Yeager as mocking NASA's Mercury Astronauts, calling them "Spam in a can." Today, with China's Jade lunar rover exploring the moon and India's Mars Orbiter Mission in flight to the Red Planet, Reeling Back recalls the movie made from Wolfe's book, and the all-American heroes (albeit really short ones) that it celebrated.

Friday, November 4, 1983.
THE RIGHT STUFF. Based on the book by Tom Wolfe. Music by Bill Conti. Written and directed by Philip Kaufman. Running time: 192 minutes. Mature entertainment in 70 mm stereophonic sound with the B.C. Classifier's warning: occasional very coarse language and swearing. FIRST, IT SEPARATES the men from the myths. Establishing its iconoclastic credentials, The Right Stuff begins by setting the record straight on the subject of the sound barrier.         On Tuesday, October 14, 1947, Capt. Charles "Chuck" Yeager, a United States Army Air Force test pilot, became the first man to fly faster than the speed of sound. For security reasons, the U.S. refused to publicize the feat and, in 1952, British director David Lean's feature film Breaking the Sound Barrier claimed the achievement for an Englishman.
The public at large would not discover Yeager until 1979, the year that Tom Wolfe published his glib, best-selling history of NASA's Project Mercury. For author Wolfe, the quiet, fearless West Virginian was "the most righteous of the possessors of the right stuff," that quality of mind that made men aspire to the skies and stars, the indefinable do-or-die something that created a fraternity of achievers who would both exploit and be exploited by the space program.
For writer-director Philip Kaufman, Yeager (Sam Shepard) is the first and last frontiersman. California's Muroc Army Air Base (later renamed Edwards Air Force Base) was located in the high desert country, a landscape right out of a John Ford western.
It was from this old frontier station that Yeager would eventually pilot a rocket plane — pilot, not just ride — to the edge of space. Kaufman, with a European weakness for obvious symbolism, offers us an early scene in which Yeager, the silent purposeful hero astride a horse, contemplates the X-l vehicle as it sits alone in the wilderness, belching fire towards the far horizon.
A man like Yeager possessed an inner strength, the self-knowledge that allowed him to accurately calculate risk. It told him just how far he could push himself and the bounds of his material. Kaufman, unfortunately, lacks the right stuff.
Displaying more bravado than bravery, the Chicago-born director bites off far more than he can easily chew. In an attempt to capture all the moods of Wolfe's multi-faceted book, he has produced a film that whipsaws between realism and caricature, offering formal historic pageantry one moment and slapstick humour the next.
Kaufman's picture is the most idiosyncratic major movie to arrive on the scene since Warren Beatty's Reds (1981). Here, though, the director is less obsessed with personal self-indulgence than with the smart-set spirit of of Wolfe's work. It is his faithfulness to that spirit that robs his picture of any consistent cinematic integrity.
After straightening out the sound barrier business, Kaufman goes on to manufacture some dubious myths of his own. His screenplay is at pains to find visual equivalents for whole chapters of text and it forces altogether too much narrative exposition into unnatural-sounding dialogue.
Nor is he above distorting the record for the sake of a a striking image. The Alan Shepard-John Glenn confrontation on the subject of astronaut sexual morality took place in a California hotel room, not in the Cape Canaveral locker room, and certainly not in full flight gear.
It is a set-up, one moment in a movie of moments, some of them moving, some annoyingly jejune. Flawed and yet compelling, The Right Stuff manages to be both a powerful and supremely foolish feature. It finally misses the point, because it has no point of view of its own.

Afterword: A product of the cinematic ferment that was the 1960s, writer/director Philip Kaufman was a creative rebel who could never settle on a cause. The 13 feature films that he's made to date include a Western (The Great Northfield Minnesota Raid; 1972) an historical drama (The White Dawn; 1974), a classic science-fiction remake (Invasion of the Body Snatchers; 1978) and an urban teen tale (The Wanderers; 1979). Eclectic without being singularly stylish, the director seemed adrift until, after making The Right Stuff, he discovered sex. His next two pictures, The Unbearable Lightness of Being (1988) and Henry and June (1990) fell into the "elegant erotica" genre pioneered by Just Jaeckin's Emmanuelle (1974). It really seemed as if Kaufman's true calling was for pornography, but he lacked the guts to commit fully to that marginalized movie genre. Too bad, because both he and porn might have benefited from his picture-making talents.