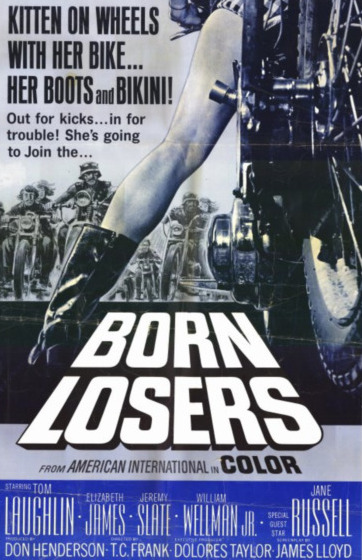 The exploitation film audience is the clear target of the theatrical release poster for director Tom Laughlin’s 1967 feature Born Losers.


Achieves much by daring more


Tom Laughlin was no fan of movie critics. In April 1975, the creator of the screen character Billy Jack took out a full-page ad in the trade paper Variety that posed the question: “Why is it that editors continue to employ critics who are totally out of touch with the audiences they are paid to review for?” Laughlin, the independent producer who had written, directed and starred in the 1971 action film Billy Jack, believed in his audience. Despite critical condemnation, his low-budget tale of a Vietnam veteran who comes to the aid of a teacher and her Freedom School, was the No. 5 top-grossing film of its year. On this day (September 18) in 1975, Laughlin took his campaign to the streets of New York, where he used the electric sign over Nathan’s in Times Square to excoriate Newsweek’s Paul Zimmerman and Joseph Morgenstern for shopping their own screenplays to Hollywood studios while working as movie reviewers for the magazine. Influenced by such independent talents as John Cassavetes and Roger Corman, he viewed film as a medium for social change, and made action films that promoted counter-cultural attitudes. Among his causes were Native American rights — Billy Jack was half-Navaho — and educational reform. He was opposed to nuclear power, the Christian right and U.S. participation in foreign wars. Billy Jack made his screen debut in director Laughlin’s 1967 biker epic Born Losers.

Afterword: While working as a supporting player on TV and in the movies, Tom Laughlin made his debut as a writer-director with a low-budget teen drama, The Proper Time. Filmed in late 1957, it finally was released in 1960, the year that he filmed his second feature, another teen angst picture variously known as Among the Thorns, The Young Sinner or Like Father, Like Son. Laughlin’s breakthrough came in 1967 with the surprise success of Born Losers, the world’s introduction to the relentless Billy Jack. The character would appear in three sequels — Billy Jack (1971), The Trial of Billy Jack (1974) and Billy Jack Goes to Washington (1977) — and in scenes filmed for the never-completed The Return of Billy Jack, footage shot in 1986 in Toronto. Tom Laughlin died in 2013 at the age of 82.