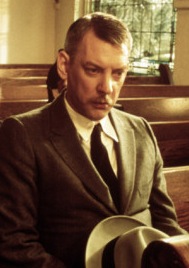 Troubled by his new life in 1930s Hollywood, Homer Simpson (Donald Sutherland) attempts to connect with his old faith, in director John Schlesinger's The Day of the Locust (1975).


The 87th Academy Awards are scheduled for this Sunday (February 22), a fact much in the news. "In Hollywood," Tim Walker reported to Britain's The Independent, "in the desperate last days of the Oscars race, it’s hard to escape the campaign ads, whether or not you’re a member of the Academy." A surprisingly small club, Hollywood's loudest echo chamber has just 6,124 voting members, 1,150 of them actors. In his Sunday (February 15) feature, The Independent's Los Angeles correspondent noted that "one billboard for The Imitation Game looms over Santa Monica Boulevard, exhorting citizens to: 'Honour the Man. Honour the Film,'" adding that "the message seems a tad shameless – support gay rights." Reading Walker's piece, I couldn't help recalling that 45 years ago, a more rambunctious generation of Academy voters did just that. Midnight Cowboy, the uncompromising story of a male prostitute directed by the openly gay John Schlesinger, collected Oscars for best picture, director and adapted screenplay. Born in London on this day (February 16) in 1926, Schlesinger did not see himself as an activist. "What I tend to go for, and what interests me," he once said, "is not the hero but the coward . . . not the success, but the failure." He experienced the latter in 1975, with his unsparing look at Hollywood myths, The Day of the Locust.

Friday, May 30, 1975.
THE DAY OF THE LOCUST. Written by Waldo Salt, based on the novel by Nathanael West. Music by John Barry. Directed by John Schlesinger. Running time: 144 minutes. Restricted entertainment with the B.C. Classifier's warning: sex, brutality and coarse language. IN HIS 1971 BOOK Breaking Through, Selling Out, Dropping Dead, moviemaker William Bayer took a hard look at Hollywood. "While Hollywood has spent years and millions cultivating technique," he wrote, "it has forgotten style."
Last year [1974], in the wake of its fabulously successful The Godfather, Paramount Pictures released an overblown remake of The Great Gatsby. Based on a slim novel by F. Scott Fitzgerald, the film was its year's biggest turkey.
This year, the studio collected a basketful of Oscars for The Godfather, Part II. And again, as if it were part of some pre-planned pattern, it has managed to explode another big-budget bomb.
The Day of the Locust is based on an unpleasant little novel published by B-movie screenwriter Nathanael West in 1939. According to a biography provided by Paramount publicists, "West and F. Scott Fitzgerald . . . were close friends in life and . . . died a day apart from one another."
Unfortunately for his heirs, West's published works did not enjoy the popular success of those of Fitzgerald. Within six months of his death in December 1940 at the age of 37, all of his books were out of print.
Had he lived through the 1950s, West might have been surprised to see his novels rediscovered and become required reading on many university-level American literature courses. It certainly would have surprised him to see The Day of the Locust made into a movie.
That the resulting picture is a stinker wouldn't surprise him, though. West hated Hollywood with a fiery passion. His novel was a scathing, surreal condemnation of everything America's film capital stood for.
And John Schlesinger's Locust is a Hollywood movie.
His story, what there is of it, revolves around Tod Hackett (William Atherton), a fine-arts graduate from Yale. Hackett has come to the West Coast to work in the art department of a major film studio.
While waiting for his big break — he wants to become an important art director — he lives in the San Bernardino Arms, a ramshackle bungalow complex peopled almost exclusively by grotesques.
He manages to ignore the androgynous Adore (Jackie Haley), an obnoxious, would-be child star, and remain polite to an aggressively gross dwarf named Abe (Billy Barty). Faye Greener (Karen Black) is another matter.
A gum-chewing movie extra with few brains and less talent, she nonetheless stirs his heart. Tod confesses his love almost immediately.
She insists that they remain "just friends."
Although he enjoys moderate success at the studio, he can't make any headway with Faye, the daughter of  Harry Greener (Burgess Meredith), an ex-vaudevillian reduced to selling solvent door-to-door. When Harry dies, Faye moves in with Homer Simpson (Donald Sutherland), a retired accountant from the Midwest.
Throughout his career, British director John Schlesinger has made movies notably lacking in heroes. His preferred protagonists — a collection that includes Billy Fisher (in 1963's Billy Liar) and Joe Buck (in 1969's Midnight Cowboy) — all live with grand illusions that eventually crumble around them.
With The Day of the Locust, he takes aim at the grandest illusion of them all, Hollywood. Unfortunately, the resulting shot seems to have been fired by a man suffering from the kind of problem that Breaking Through author Bayer ascribes to the city itself.
Schlesinger's film is full of artistic pretences and sociological cliches, all of them edged with what is supposed to be toxic humour. It looks like something Richard Lester might have turned out before he grew up.
Paradoxically, it is also a film full of striking performances, most of them good.
Donald Sutherland, an increasingly intelligent actor, distinguishes himself in a role that calls for him to exude anguish from every pore. William Atherton, who made his screen debut last year [1974] opposite Goldie Hawn in The Sugarland Express, adds just the right note of sensitive vulnerability to his college-grad self-assurance.
Burgess Meredith, an old trouper playing an old trouper, has no trouble putting across his character. Only Karen Black is out of place.  Despite considerable effort, she fails to be convincing either as a 17-year-old or as an irresistibly attractive dream girl.
Faye is the kind of role that should have gone to somebody like Tuesday Weld. It did once — in director Frank Perry's own little hate letter to Hollywood, the self-indulgent Play It as It Lays (1972) — and Weld provided a good performance in a bad movie.
Schlesinger offers a number of good performances, but he never makes the parts come together in a whole. His story concept, like his annoying soft-focus photography, is murky. Screenwriter Waldo Salt's narrative is unintelligible for all but readers of the original novel.
A disjointed collection of moody little — and some not so little — vignettes, The Day of the Locust is supposed to be a telling assault on the Hollywood legend. What it is is a failed fantasy.

Afterword: Its literary source notwithstanding, The Day of the Locust was one more addition to Hollywood's most narcissistic sub-genre, movies about movie-making. That it should focus on "losers" was hardly a surprise. Schlesinger made his directorial reputation with British "kitchen sink" dramas such as A Kind of Loving (1962) and Billy Liar (1963). He received his first best director Oscar nomination for his 1965 tale of "swinging London," Darling, and was nominated for a third time for his 1971 follow-up to Midnight Cowboy, an urbane examination of English bisexuality, Sunday, Bloody Sunday. Prior to The Day of the Locust, all of Schlesinger's downbeat pictures had the saving grace of some humour. For all of its surreal imagination, his recreation of 1930s Hollywood was relentlessly sour. He recovered his sense of humour, casting Laurence Olivier as a villainous Nazi dentist, with Marathon Man (1976), and then showed considerable heart with Yanks (1979), his tale of American soldiers in Second World War Britain. It all fell apart again when he tried his luck at another American satirical comedy, the quite awful Honky Tonk Freeway (1981). Schlesinger would never have another major theatrical hit, but his made-for-BBC-TV feature Cold Comfort Farm (1995), based on Stella Gibbons's 1932 comic novel, is the gem of social satire The Day of the Locust failed to be. He finally got it right.
Say the name "Homer Simpson," and most people are likely to say "D'oh!," rather than, "that really repressed guy from Nathanael West's novel, The Day of the Locust." It's part of pop culture lore that comics artist Matt Groening named The Simpsons after members of his own Portland, Oregon family: his real life sisters Lisa and Maggie, his mother Marge, and father Homer. In 1990, though, Groening is reported to have told interviewers that he really had West's novel in mind. Regardless of which version you choose to believe, there's no argument about the fact that, in 2015, the cartoon character is the more famous fictional figure.

See also: For a more successful movie about movie-making, see my review of director Robert Altman's The Player  (1992); For more on Matt Groening and the origin of The Simpsons, see my report on The Second Animation Celebration (1989).