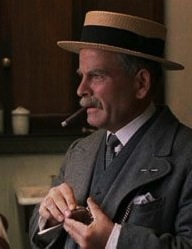 Waiting in a Paris hotel room across from the Olympic stadium, socially unacceptable running coach Sam Mussabini (Ian Holm) listens for the results of his spiritual son's race in 1981's Chariots of Fire.


The virtue and folly of sport in simpler times


Sixty years ago today (August 7), the ears of the world were on Vancouver. Ears, because broadcast television was in its infancy. Although an estimated 40 million North American viewers tuned in to a precedent-setting CBC/NBC special network telecast, most of the world listened to it on the radio. Vancouver, because Canada's Pacific coast metropolis was playing host to the 1954 British Empire and Commonwealth Games, nine days offering 91 sporting events involving some 662 athletes. The world, because Britain's empire, though in the process of morphing into something called "the Commonwealth," still consisted of 24 participating nations spread over over six continents. What they were listening to was the race between England's Roger Bannister and Australia's John Landy, the only men in the world to have run the mile in under four minutes. Going in, Landy held the record — 3:57.9 to Bannister's 3:59.4 — and he held the lead for most of the run. Bannister's sudden burst of speed in the final lap put him across the finish line in just 3:58.8 for the gold medal win. Landy took the silver with a time of 3:59.6. While the race is remembered as "The Miracle Mile," the third-place medalist, Canada's Rich Ferguson, is the forgotten man. Cinematically, our most powerful memory of "amateur" sport remains director Hugh Hudson's 1981 epic Chariots of Fire

Thursday, October 8, 1981
CHARIOTS OF FIRE. Written by Colin Welland. Music by Vangelis Papathanassiou. Directed by Hugh Hudson. Running time: 124 minutes. General entertainment. NOSTALGIA. IT WORKED FOR the Yanks, didn't it?
Raiders of the Lost Ark, Rocky, Superman, all the good'uns remind us of what it was like going to the cinema in the good old days.
Well, there were good old days over home, too. It wasn't always  kitchen sinks, puke rock and superspys, y'know. British cinema had its  own golden age.
It's from that age — the years in which a Hungarian-born movie mogul by the name of Alexander Korda proved that world-class films could be made in Britain — that Chariots of Fire draws its inspiration. A hymn of praise to individual, interior heroics, it is an earnest evocation of a time past in a vintage cinema style.
The time is 1924. Britain's Olympic team, "the favoured few," is preparing to embark for the Games, this year being held in Paris. In flashback we meet two of the team's brightest hopes.
Harold Abrahams (Ben Cross), a First World War veteran, is a Cambridge man. The son of a London City financier, Abrahams is reading law,  keenly aware that as a Jew he will have to fight for a place within  his country's ruling establishment.
Eric Liddell (Ian Charleson), a Scottish soccer star, is in training for the clergy. The Chinese-born son of Christian missionaries, Liddell plans to return to the Orient to continue their work.
Both men are driven runners. Liddell does it because "I honour God by winning." Abrahams says that running is "my weapon against being Jewish." Both men are utterly sincere.
Sincerity, unfortunately, has become a dated concept in the movies; one more suited to comedy than serious drama. Scripts involving sincere athletic dedication are likely to result in hackwork horrors, like 1979's Running.
The problem facing first-time feature director Hugh Hudson was how to make a movie that honours its heroes rather than mocking them. The answer was to adopt the slightly florid but utterly sincere style of the great Korda epics, films like the 1936 biopic Rembrandt and the period war drama The Four Feathers (1939).
Liddell and Abrahams were heroes because they remained true to their principles in the face of considerable social opposition.  Abrahams' crisis comes when his Cambridge house master (Lindsay Anderson) and provost (John Gielgud) gently suggest that his association with a private coach violates the tenets of gentlemanly amateurism.
"I believe in the pursuit of excellence," he tells them, fully aware that he is rejecting the rules of a society that he desperately wishes to enter.
Liddell's crisis comes when he learns that his Olympic race is scheduled for a Sunday. After informing Lord Birkenhead (Nigel Davenport) that he cannot in conscience compete on a Sunday, he is pressured to change his mind by no less a personage than the Prince of Wales (David Yelland).
For most of its length, Chariots of Fire seems emotionally distant from its material. The period style keeps us from becoming deeply involved with its characters, their conflicts or their concerns.
Then, suddenly, director Hudson works a small miracle. During the last 10 minutes of his picture, he concentrates on Sam Mussabini (lan Holm), Abrahams' aging, socially unacceptable coach.
We realize that Sam is as distant as we are from these people, and yet living a life-long dream through his spiritual son, Abrahams.
All that Sam is, is competing in a race that he won't even see. Nor do we.
Hudson's camera stands with Sam as the crucial race is run.
Stopwatch in hand, Sam waits in a cheap hotel room across from the Olympic stadium. From his window he sees only the wall, and beyond it the flagpoles used for the banners of the nations placing first, second and third.
With him, we hear the starter's gun, endure the seconds as they tick by, hear the cheering crowd and hold our breath waiting to see whose colours will rise on the centre pole.
At that moment, Chariots of Fire becomes an intimate, intensely satisfying film. A morally uplifting tale cast from a classic mould, it celebrates the virtues and follies of a simpler time.

Afterword: In 2010, Vancouver played host to the XXI Olympic Winter Games, giving us a close-up look at the true meaning of "Faster - Higher - Stronger" in the 21st century. Today, it is the slogan of a commercial venture dedicated to the enrichment of the Swiss-based International Olympic Committee (IOC), a 100-man transnational body responsible to nobody but themselves. Following the triumphalist model of the 1936 Summer Olympics held in Berlin, the IOC administrators hold their fascist-inspired fun fests entirely at the expense of the various host nations. Canadian taxpayers, who "won" the right to fund its 2010 party, paid out approximately $1 billion (five times the estimated bill) for security alone. The question that's hardly ever asked: what is the value of an Olympic "ideal" that requires the construction of an armed camp for a commercialized event, an area within which actual democratic rights are suspended? By focusing on the outsiders in his film Chariots of Fire, director Hugh Hudson suggested that the highly promoted "Olympic Spirit" is not necessarily a force for good in the community. Millions of Brazilians, who took to the streets to protest the cost of the 2014 FIFA World Cup, are every bit as skeptical of the coming Rio 2016 Summer Olympics.

See also: The CBC Digital Archive offers a six-minute, 45-second clip of Vancouver's four-minute 'Miracle Mile' (which plays after one minute of promotional ads). Released in 1981, Chariots of Fire was nominated for seven Academy Awards. It won four, including best picture, screenplay, music and costume design. On the eve of the Awards in March 1982, I interviewed Ben Cross, who said he was "taking it in my strides."