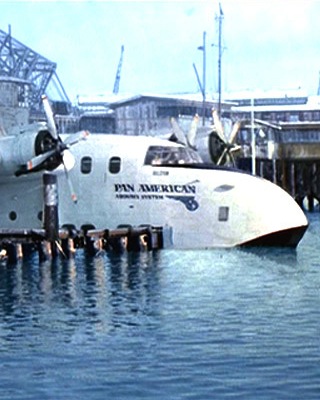 
A Whizzbang return to days of yesteryear


Time was when air travel was an adventure, rather than an ordeal. Before the age of airport security — measures most security experts admit are largely theatrics designed to give the illusion of safety — people looked forward to the experience. To this day, certain aircraft are synonymous with our 20th-century romance with aviation. Who can forget the Lisbon-bound DC-3 (or was it a Lockheed Electra 12A?), its engine coughing to life on that runway in Casablanca? For pure luxury, to say nothing of exotica, Reeling Back's favourite fantasy flights involve the Boeing 314 Clipper, the long-range flying boat built for "one-class" luxury travel and operated by Pan Am for a brief three years. Earlier this week (June 24), Clipper buffs marked the 75th anniversary of its inaugural Atlantic crossing, a New York to Southhampton route that included stops in New Brunswick, Newfoundland and Ireland. Scheduled passenger service began on July 9, 1939. Less a luxury hotel than a workhorse was the Martin M-130 flying boat, the Pan Am China Clipper that Indiana Jones boarded in 1936. His San Francisco to Manila flight was the first leg of his journey to Nepal in Raiders of the Lost Ark.

Thursday, June 11, 1981
RAIDERS OF THE LOST ARK. Written by Lawrence Kasdan. Based on a story by George Lucas and Philip Kaufman. Music by John Williams. Directed by Steven Spielberg. Running time: 115 minutes. Rated Mature with the B.C. Classifier's warning: some gory violence and occasional swearing. THE VAST WHIZZBANG ORGANIZATION will give thanks. For years, Captain George Henderson, Pete Harris and the three Dons, Daynard, Miller and Hutchison, have kept the faith.
From their base of operations deep beneath Toronto's Memory Lane nostalgia shop, they have turned out 643 issues of Captain George's Penny Dreadful, a weekly newsletter dedicated to the pulp tradition in the mass media. For years Whizzbangers have had but one prayer: Oh, that those thrilling days of yesteryear should come again!
Their memories are magical, their taste eclectic. Movies and magazines, radio, books and comic strips are all part of a past full of innocence, energy and youthful enthusiasm, beloved artifacts that Captain George poetically calls "the toys of the dead."
But wait. The age of miracles is not past. Faith is still rewarded and prayers are answered.
Yesteryear lives! Raiders of the Lost Ark is the perfect Saturday afternoon at the movies, action and adventure not as it was, but as it should have been.
Welcome a picture with the all-American vitality of 1973's American Graffiti, the edge-of-your seat tension of Jaws (1975), the breakneck pacing of Star Wars (1977) and the mystical excitement of Close Encounters of the Third Kind (1977). Working together for the first time, writer-producer George Lucas and director Steven Spielberg have put together nearly two thrill-packed hours of pure entertainment.
Welcome Indiana Jones (Harrison Ford), the laconic Hoosier hero of the piece. A scientist-adventurer in the best Doc Savage tradition, he is an archeologist who accepts assignments to "acquire" hard-to-come-by antiquities.
The time is 1936. U.S. Army Intelligence has learned that a German expedition acting under direct orders from Adolf Hitler has unearthed the lost city of Tanis. A team is dispatched to the local university to ask Dr. Jones just what is going on.
Tanis, Jones explains, is thought to be the final resting place of the biblical Ark of the Covenant, stolen from Jerusalem's Temple of Solomon about 980 B.C. Built to contain the stone tablets upon which God set down the Ten Commandments, the Ark is believed to have incredible supernatural powers.
Hitler, an avid occultist, obviously believes that the power can be used for his own ends, Jones suggests. An army travelling with the Ark before it would be invincible, adds his colleague, Marcus Brody (Denholm Elliot).
With the fate of the world thus endangered, Jones is hired to get the Ark for America.
As in Star Wars, Lucas is the creator. Together with Philip Kaufman, he came up with the idea for a high adventure feature with the matinee mood of the old cliffhanger serials.
He discussed the idea with Spielberg, following the successful premiere of his outer space epic. Six months later, Spielberg, a serial and pulp buff in his own right, agreed to direct the picture.
Like Star Wars, Raiders of the Lost Ark begins with a bang. Jones is introduced braving the depths of a South American jungle to "acquire" a golden idol hidden within an ancient temple.
From the moment the curtains part, we're in the thick of the action. The temple contains at least seven deadly booby traps. The local natives are hostile. Jones's arch rival, Rene Belloq (Paul Freeman) is on the scene. Spielberg packs more breathtaking action into a single reel than Michael Cimino could muster for all of Heaven's Gate (1980).
What makes it good is the fact that nothing is gratuitous. Everything contributes to the delineation of character, the development of the story and the advancement of the plot. There's not a wasted moment or unnecessary scene in the entire picture.
Jones, outfitted in a leather jacket, gloves and slouch-brimmed Fedora, is a proper 1930s hero. A man-with-a-past, he goes unshaven for days and carries a bullwhip as his chosen weapon.
His mentor was the late Abner Ravenwood of the University of Chicago. He is hated by Ravenwood's daughter Marion (Karen Allen), a self-reliant young woman who was romantically involved with him 10 years earlier.
Now, Jones needs Marion's help. He journeys to Nepal to confront her in her saloon (that's saloon, as in bar, not salon, as in boudoir), only to discover that Nazi agent Toht (Ronald Lacey) is right behind him.
Raiders of the Lost Ark delivers what every serial promised — danger in exotic locales, a battle between good and evil, an imperilled heroine who can hold her own in a fair fight, a dedicated hero whose appetite for adventure is leavened with good humour and common sense.
As if that weren't enough, Famous Players theatres are using the occasion to introduce 70mm projection and Dolby stereophonic sound to the Vancouver Centre and the Lougheed Mall, the two theatres presenting the picture.

*   *   *
THERE SEEMS TO BE some confusion about the Allen girls, Karen and Nancy. Since we're likely to see a lot more of both of them, let's make sure that we're clear on who's who.
Nancy is the one who has been around the longest. The prettier of the two, she made her screen debut with a bit part opposite Jack Nicholson in The Last Detail (1973).
Since then, Nancy has been seen in I Wanna Hold Your Hand (as Pam), 1941 (as Donna) and three Brian De Palma pictures — Carrie (as Chris), Home Movies (as Kristina) and Dressed to Kill (as Liz). Born in New York, Nancy Allen became Mrs. Brian De Palma
in January, 1979.
Karen, who is no kin to Nancy, was first seen in 1978's Animal House playing Katy, the Faber College coed involved with English professor Donald Sutherland. A freckle-faced young woman with lovely legs and  a smashing smile, she is from Washington, D.C.
Karen played a character called Nancy opposite Al Pacino in Cruising. She was also seen in The Wanderers (as Nina) and A Small Circle of Friends (as Jessica) before signing on as Marion Ravenwood in Raiders of the Lost Ark.

Afterword: The first film in what has become the Indiana Jones movie franchise, Raiders of the Lost Ark was an homage to one generation's junk that became its own generation's mass art. Lawrence Kasdan's screenplay brimmed with witty lines — "Asps! Very dangerous! You go first." — that found their way into the cultural shorthand of day-to-day conversation. Its prequel, 1984's Indiana Jones and the Temple of Doom, and two sequels (1989's Indiana Jones and the Last Crusade; 2008's Indiana Jones and the Kingdom of the Crystal Skull) were all larger, louder and rather less fun. And those Allen women? Karen Allen reprised her Marion Ravenwood role in 2008's Indiana Jones feature (spoiler alert: they get married in the final scene), but her most lasting impression was as young widow Jenny Hayden in the science-fiction romance Starman (1984); She continues to appear in movies and on television to this day. Nancy Allen divorced Brian De Palma in 1984, and went on to play Detroit police officer Anne Lewis in the original three Robocop features (1987, 1990 and 1993). She effectively retired from acting about 10 years ago.