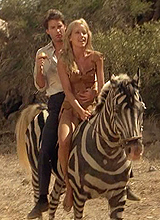 
The first female character featured in her own comic book, Sheena, Queen of the Jungle made her American debut in September, 1938. A movie adaptation — 1984's Sheena — was a long time coming, and fell far short of her success on the printed page.

Friday, August 24, 1984.
SHEENA. Written by David Newman and Lorenzo Semple, Jr., based on a character created by S.M. Iger and Will Eisner. Music by Richard Hartley. Directed by John Guillermin. Running time: 116 minutes. Mature entertainment with the B.C. Classifier's warning: some violence, occasional nudity, swearing and coarse language. FIRST-TIME PRODUCER PAUL Aratow should write a book. He could call it "The Making of Sheena: Or, How to Foul Up a Surefire Movie Idea in Three Incredibly Expensive Steps."
Step 1: Hire a pair of high-priced Hollywood hacks to write a wise-acre screenplay full of unlikely situations and half-witticisms. David (Superman II) Newman and Lorenzo (King Kong remake) Semple, Jr., for example.
They came up with a story set in the African kingdom of Tigora, where Prince Otwani (Trevor Thomas) is plotting the assassination of his brother, King Jabalani (Clifton Jones) so that he can mine the wealth of the sacred mountain of the Zambooli.
Because Otwani is also an American pro football star, Sports World field producer Vic Casey (Ted Wass) is on hand to discover the truth and aid Sheena (Tanya Roberts), the Zambooli's blonde queen, in her fight with Otwani's white mercenaries.
Step 2: Hire a director who says dumb things like "the feel of the finished product is very important. There would be no way to get that 'feel' except by working and living in Africa.
"All of us . . . felt the imprint of Africa as we were shooting," John (King Kong remake) Guillermin says. Which is a fine approach, if you're shooting a National Geographic TV special.
Step 3: Ignore the fact that the portrayal of the title character is the single most important aspect of the production. Forget that the "feel" of Sheena — by definition the self-assured embodiment of nature's own power, beauty and grace — must be right for an audience to accept the film.
Instead, hire Tanya Roberts, a former Playboy model whose spaced-out delivery of lines, such as "I am Sheena," make Bo Derek look like an Oscar contender. Try to work around the fact that Roberts looks ungainly and confused when asked to do anything more complex than a nude pose.
Follow these three simple rules, as Aratow did with his Sheena adaptation, and your failure is assured.

Afterword: Despite the harsh words for her performance in Sheena, I really hoped that Tanya Roberts would find success. Though born in the Bronx, she spent her teen years in Toronto (where her mother settled after divorcing her father), and so was an honourary Canadian. Stardom seemed assured in 1980, when she joined the cast of televison's Charlie's Angels, a moment celebrated with a People Magazine cover. In a cruel twist of fate for Roberts, the show was cancelled 16 episodes into her season, the show's fifth. In 1982, her co-starring role opposite the well-muscled Marc Singer in The Beastmaster included an appearance on the cover of Playboy. Then came Sheena, her best shot at movie stardom, in which she had top billing and the title role. Its failure determined the direction of her subsequent career, which included a Bond-girl moment (as Stacey Sutton in 1985's A View to a Kill) followed by a succession of "erotic" thrillers and TV episode guest starring roles. For the most part, the Sheena character's success was confined to comic books, where the jungle girl enjoyed her greatest popularity in the years 1938-1953. A pin-up model named Irish McCalla was cast in the title role of a single-season (1955-56), 26-episode television series called Sheena, Queen of the Jungle. More recently, former Baywatch co-star Gena Lee Nolan starred in a two-season (2000-2002), 35-episode TV series just called Sheena.