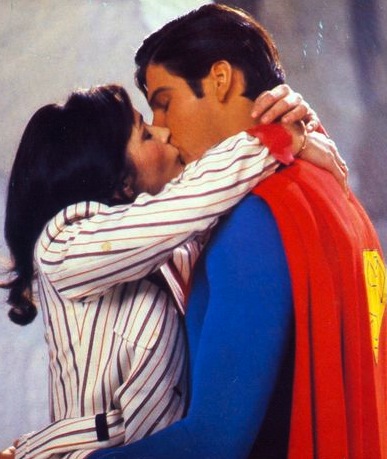 Lois, Lex to the rescue


Comics artist Joe Shuster was born in Toronto on this day (July 10) in 1914. In 1924, his family moved to Cleveland, where Shuster and high school classmate Jerry Seigel created The Man of Steel, who came to life in such feature films as 1980's Superman II.

Wednesday, June 24, 1981.
SUPERMAN II. Written by Mario Puzo, David Newman and Leslie Newman. Based on characters created by Jerry Siegel and Joe Shuster. Music by Ken Thorne and John Williams. Directed by Richard Lester. Running time: 127 minutes. Rated General entertainment, with the B.C. Classifier's warning: occasional swearing. THANK GOODNESS FOR Lois Lane. Without her, Superman II would have no heart.
Hang in there, Lex Luthor. Without him, Superman II would have a lot less humour.
What happened, Richard Lester? Under your direction Superman II has the uneven, slapdash look of an afterthought sequel. Despite all the advantages of time and money, the Man of Steel's return to the big screen is a big letdown.
Granted, I went into the theatre — the Dolby stereo-equipped No. 1 auditorium of the Capitol 6 — with heightened expectations. Superman was a super movie. The 1978 release was the perfect marriage of film magic, modern mythology and just plain fun.
Currently [1981] seventh on Variety's list of All-Time Film Rental Champs, my own reactions were shared by millions of others who went back to see it again and again. l've been back at least five times and enjoy it more over time.
Richard (The Omen) Donner is the director credited with Superman. According to early reports, producers Alexander and Ilya Salkind were using their Three Musketeers strategy on the project. Donner was supposed to be shooting two films simultaneously, the second designed to follow in the wake of the first's success.
Somewhere along the line the strategy failed. Film-goers will notice that Jor-El (played by the temperamental Marlon Brando), Superman's Kryptonian father, has been written out of the new film. Presumably Brando's Superman II footage was scrapped.
A more serious development was the falling out between Donner and the Salkinds. Richard Lester, the director who made The Three Musketeers (1973) and The Four Musketeers (1974) for the Paris-based producers, was called in to complete the picture.
All appeared to be well. The Musketeers movies are marvellous, and remain among my very favourites. Some of Lester's other work, notably Robin and Marian (1976), is touched with brilliance.  So what happened, Dick? According to the trade papers, your Superman II is 80-per-cent Lester to 20-per-cent Donner, a $35-million picture all on its own.
The storyline recalls that at the opening of Superman, Jor-El (Brando) is the prosecutor responsible for the condemnation of three Kryptonian criminals to the Phantom Zone. General Zod (Terence Stamp), his mute henchman Non (Jack O'Halloran) and a butch-looking groupie, Ursa (Sarah Douglas), have just enough time to curse Jor-El's line before being popped out of the picture.
In Superman II, a hydrogen-bomb explosion in outer space releases the terrible trio, who come to Earth with powers and abilities equal to those of our hero. Unfortunately, they are also the dullest villains to menace the planet since 1958's The Blob.
Is this the same Dick Lester who made a tragic, chivalric hero out of the Sheriff of Nottingham? It's a good thing that old Lex Luthor (Gene Hackman), Superman's nemesis from the first picture, is able to break out of jail and make contact with the intergalactic nasties.
Luthor, of course, exudes personality from every pore of his shiny pate. Unlike the solemn cyphers from deep space, he is a character with some motivation. Luthor takes delight in his villainy, and is a delight to watch.
Zod's crew, by contrast, show only boredom. With the sort of offhandedness usually reserved for portrayals of pre-revolutionary French aristocrats, Zod humiliates the president of the United States (E.G. Marshall) and takes over the world.
Thank heaven for Lois Lane (Margot Kidder). In a performance that deserves some sort of damsel-in-distress award, Kidder makes her character positively vibrate with humanity, liberated femininity and, eventually, love for our hero.
This is the picture in which Lois figures out Clark Kent's secret. Here the screenwriters (Mario Puzo, doctored by David and Leslie Newman) toss out the comic book's long-established conventions, develop Kent/Superman/Kal-El's own humanity and let nature take its course.
For the record, Christopher Reeve may be the most under-rated actor to turn up in an age. He plays his dual role with a subtlety and a skill that is too often overlooked because the Superman features are such bravura special effects shows.
Women, though, noticed that the screen positively sizzled in the first film's famous flying sequence. Here, the scenes between Kidder and Reeve are no less hot for their being in a "family film." When Superman tells the projected image of his mother Lara (Susannah York) that he loves Lois, well, the moment is beautiful.
Moments, however, do not a movie make. Where Superman maintained an emphasis on bright, primary colours and crisp photography (recalling, of course, the hard-edged drawing style and four-colour printing process used in the comics), Superman II mixes in muted tone sequences and some bits that are just plain muddy. Donner's consistent visual style created and sustained a mood that Lester's lack of consistency fragments and finally loses.
The special effects in Superman convinced us that "a man can fly." Here, specials-sated audiences are likely to find the work hastily done, and nowhere near as effective as in the first film.
Yes, I'll probably be back to see the picture again — my wife and daughter can't get enough of Christopher Reeve — but I won't like it as much as the original.

Afterword: That the names Jerry Seigel and Joe Shuster appear in the film's credits at all is a tribute to the tenacity of Superman's creators. The comic, in which he made his debut in June, 1938, was owned by the company that became DC Comics. In 1946, the creators went to court to dispute the company's claim that it owned the copyright to their work. The judgement, as is so often the case, supported the corporation's position. In 1967, when the Superman copyright came up for renewal, Siegel issued a new legal challenge, and lost again. In 1975, with the first Superman film in pre-production, Seigel and Shuster went public with their grievances. Warner Communications, the media conglomerate that by then owned both the comic book and film production companies, suddenly discovered that, yes, the two men really did deserve creator bylines on subsequent comics, and in the movie's credits as well. Just to prove there were no hard feelings, the multi-billion-dollar corporation threw in a lifetime pension for each of them worth $20,000 a year (plus health benefits). Shuster died July 30, 1992, at the age of 78. His creative partner Seigel died three and half years later, on January 28, 1996, aged 81.