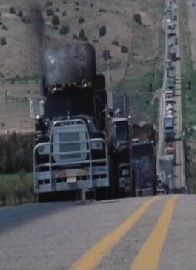 Come on and join our convoy / Ain't nothin' gonna get in our way. / We gonna roll this truckin' convoy / 'Cross the U.S.A. / Convoy!


Ah, breaker one-nine, this here's the Rubber Duck. You got a copy on me, Love Machine? Ah, 10-4, Pig Pen, fer shure, fer shure. By golly, it's clean clear to Taco Town. Yeah, we definitely got us a front door, good buddy. Mercy sakes alive, looks like we got us a convoy . . . On this day (January 9) in 1976, a novelty song about CB radio-equipped long-haul truck drivers made it to No. 1 on U.S. country music charts. Three weeks later, Convoy would be No. 1 on the nation's pop charts as well. Describing a cross-country rebellion against the hated 1974 federal Maximum Speed Law's imposition of a 55 mph (89 km/h) limit on U.S. highways, the lyrics were by singer C.W. McCall (whose real name was Bill Fries) to music by Chip Davis. Their song became an anthem in the freedom-loving republic, where the right to exceed the speed limit was once held as sacred as the right to keep and bear arms. It also became the inspiration for a 1978 feature film, one of several to make cowboy-like heroes out of truck-diving men. Convoy was action director Sam Peckinpah's one and only attempt at action comedy, a midsummer hit and one of its year's top-grossing films. Songwriter McCall was along for the ride, of course, providing new lyrics more precisely fitted to the film's plot.

Saturday, 15 July, 1978
CONVOY. Written by B.W.L. Norton, based on a song by Bill Fries.  Music by Chip Davis. Directed by Sam Peckinpah. Mature entertainment with the B.C. Classifier's warning: some nudity, coarse language and violence. QUESTION: WHAT DO you call a Sam Peckinpah film in which none of the characters is either shot or killed?
Answer: A  comedy.
And why not? The fact that Peckinpah is one of the world's great directors doesn't oblige him to be grim and serious all the time. The man knows how to laugh and, more to the point, how to laugh at himself.
Convoy is his lightest film to date. Its inspiration was no more substantial than a pop tune — in this case, C.W. McCall's song about CB-equipped truckers, a tough bunch who get mad as hell and won't take it any more.
Using the ballad's five verses as an outline, screenwriter B.W.L. Norton constructed the story of Martin "Rubber Duck" Penwald (Kris Kristofferson), a diesel rig-riding cowboy. Though his background is ambiguous, his legendary status among his fellow truckers strongly echoes that of Burt Reynolds's genial, Smokey-baiting Bandit.
The story opens with the Duck in Arizona. He's chatting with the other members of his   pick-up convoy, Spider Mike (Franklyn Ajaye), a new, young driver, and Pig Pen (Burt Young), a surly highway veteran who is hauling a particularly odiferous load of swine.
All is well until the men get a CB message telling them that the blacktop is bear-free. They  put the pedal to the metal and meet ''Dirty'' Lyle Wallace (Ernest Borgnine), a less than honest sheriff's deputy who practices the fine art of entrapment.  A free-enterprising lawman, he'll tear up your ticket in exchange for a substantial personal consideration.
The trouble is that ol' Lyle doesn't know when to leave well enough alone. A few miles down the road, he pulls into a truck stop and tries to arrest the now penniless Spider Mike for vagrancy. It's time for the barroom brawl scene, a sequence in which Peckinpah tucks tongue in cheek and parodies his own reputation for slow-motion mayhem.
It ends with five truckers on the road, on the run behind the Rubber Duck.
Convoy is a working man's fantasy. In it, Peckinpah mixes elements of Steven Spielberg's Sugarland Express (1974) with his own movies, The Getaway (1972) and The Wild Bunch (1969), to come up with the Great Gearjammer. It's a picture full of pleasant improbabilities.
Most improbable is Ali MacGraw, who plays Melissa, a flakey photo-journalist riding with the Duck in the cab of his black Mack. By the time they cross the state line into New Mexico, their convoy has become a Cause.
"What are they doing there?'' Melissa says, noticing that there are at least 50 rigs    thundering along behind them.
"Don't ask me," says the Duck. ''I'm just running for my life.''
''But they're following you,'' she protests.
''No they're not,'' the Duck insists. ''I'm just in front.''
Well, yes. There is some social commentary here. This is a Sam Peckinpah film, after all, and there are deeper meanings in it, if you're inclined to look for them.
Just why do more than 100 vehicles fall in line behind the fleeing Duck? There are as many reasons as there are rigs. It is a groundswell of popular unrest that finds its focus in a hell-bent-for-leather charge across three states, and Richard Nixon's 55 miles-per-hour limit be damned.
It's a hell of a metaphor, if that's what you're looking for. Mostly, though, Convoy is a big ol' action comedy. With wit and the sure style that is his trademark, Peckinpah has created a classic 18-wheel western.

Afterword: There was a time in America when truck drivers were thought of as modern day cowboys. Although the movies would occasionally feature a truck-driving hero, it wasn't until the mid-1970s that the Interstate brotherhood enjoyed a major screen presence. Two factors — the 55 mph speed limit and the widespread use of citizen's band (CB) radios — combined to attract Hollywood's attention. Suddenly, audiences were being offered White Line Fever (1975), Smokey and the Bandit (1977; with sequels in 1980 and 1983), Citizen's Band (1977) and Breaker! Breaker! (1977). Sorcerer (1977) was a remake of a classic French film, 1953's Wages of Fear. F.I.S.T. (1978) stood for Federation of InterState Truckers and was a fictionalized account of the life of Teamsters Union leader Jimmy Hoffa. There was even a Canadian contribution to the trend called High-Ballin' (1978). What they all had in common were working men questioning the status quo and coming together via early social media (their CB radios) in acts of citizen rebellion. Hollywood, leery of anything radical that wasn't clearly fantasy — 1977's top grossing film was a little game changer called Star Wars — was happy to shift the speed-limit conversation away from rebel truckers to illegal road racers. Taking the example of Death Race 2000 (1975) were such comedic  offerings as The Gumball Rally (1976), and The Cannonball Run (1981; with 1984 and 1989 sequels).