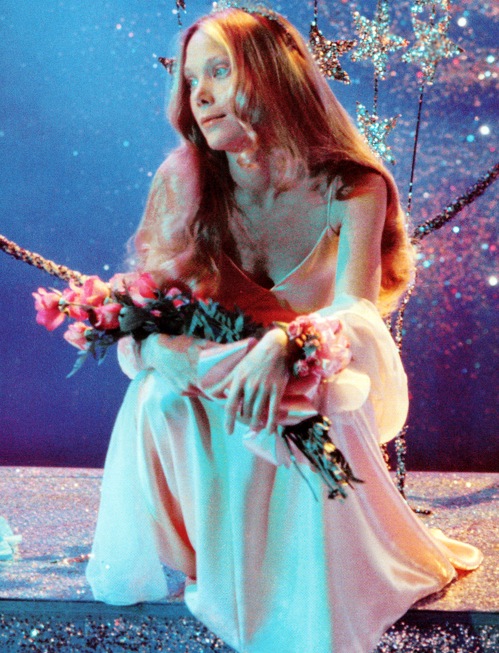 The dream before the nightmare: The senior prom just as Carrie White (Sissy Spacek) imagines it.


Blood bath for a Prom Queen


Today [Fri., Oct. 18, 2013], filmgoers will get their first look at director Kimberly Peirce's remake of Carrie. Of particular interest is what an accomplished woman director — Peirce guided actress Hilary Swank to a Best Actress Oscar win in 1999's Boys Don't Cry — will make of the Steven King novel in which female maturation is turned into a nightmare. We already know what Brian De Palma did with the material. His 1976 feature, cinema's first adaptation of a King novel, was a blockbuster hit and has become a horror movie classic. Arguably, De Palma kick-started author King's Hollywood career, which has resulted in a seemingly endless stream of novels and short-story adaptations, as well as some original screenplays. On this round, Reeling Back will recall four of those features, including the original Carrie and David Cronenberg's Dead Zone. Tomorrow, postings will include my take on 1970s movie horrors, prompted by the release of Stanley Kubrick's The Shining, and a review of Fraser Heston's made-in-Vancouver adaptation of Needful Things.

Monday, November 7, 1976
CARRIE. Starring Sissy Spacek, Piper Laurie, Amy Irving, William Katt and Betty Buckley. Written By Lawrence D. Cohen, based on the 1974 novel by Stephen King. Directed by Brian De Palma. Restricted entertainment with the warning "some frightening scenes."
"IT'S ALL IN THE CASTING," director Brian De Palma once told movie critic Joseph Gelmis (who quotes De Palma in his 1970 book The Film Director as Superstar). "If you cast the right people, it's hard to go wrong.
"I try to use very real people,"
There are no big names in Carrie. For his latest excursion into the darkest reaches of the human mind, director De Palma has assembled a cast of remarkably real people.
Take Betty Buckley, for instance. A Broadway musical performer with no previous film experience, Buckley is perfect playing the part of Miss Collins, the no-nonsense gym teacher at Bates High School. Though she is tough enough to slap a defiant student, Buckley's Collins is thoroughly believable as a compassionate class leader who is concerned about one of her more sensitive charges.
Take William Katt, for another instance.  A Los Angeles stage actor, Katt has the role of Tommy Ross, the senior class sports hero and the school's Mr. Nice Guy.  When his girlfriend Susie Snell (Amy Irving, another movie newcomer) asks him to take a less attractive girl to the school prom, Tommy does so with good grace and considerable understanding.
Take Sissy Spacek, the star of the show. She is touchingly real as Carrie White, the ungainly girl for whom Miss Collins is concerned and who, in something of a teen dream, gets to go to the prom with Tommy.
Despite her placid features, Spacek's brief screen career has been filled with violence. She made her film debut as Poppy, the drugged orphan for whom Lee Marvin killed Gene Hackman in 1972's Prime Cut.
Next she played Holly, the co-starring role in 1973's Badlands, the story of a teenage thrill killer. She is the catalyst for more violence in Carrie, her second assignment for Brian De Palma. (Sharp-eyed credit readers will remember that Spacek got a set decoration credit for De Palma's 1974 musical, The Phantom of the Paradise.)
De Palma has chosen his "real people" well.  Unlike Obsession (also 1976, a superior mystery-thriller starring Genevieve Bujold), Carrie is set in a world familiar to us all. Here, De Palma is emulating American Graffiti director George Lucas, deploying his cast of excellent unknowns in and around the all-American high school.
Just as American Graffiti managed to capture the dream-like universality of the teen experience,  Carrie records the ultimate adolescent nightmare — not belonging.  Carrie White is the class outcast,  the socially awkward, biologically backward daughter of the town nut.
In the face of all the odds, Carrie has reached her senior year of high school without ever having had a menstrual period. A total innocent, she's never missed it and is thrown into a panic when it finally happens to her during a gym class shower.
She screams for help.  Her classmates respond by taunting her into hysterics, a cruel indignity that sets in motion a tragic chain of events.
Miss Collins stands up for Carrie and severely punishes the rest of the class. Sue, feeling guilty,  wants to make it up to her;  Chris (Nancy Allen), the class vixen, is determined to humiliate her still more.
The most incredible reaction, though, comes from Carrie's own mother (Piper Laurie, in her first screen appearance in 15 years). An unloving religious fanatic, Margaret White tells her daughter that "the curse" means that she is accursed. She locks her daughter in a candle-lit closet to pray for forgiveness.
From such elements, De Palma might have constructed a mean-minded melodrama. There is one further complication, though. Carrie is becoming aware that she has telekinetic powers. Carrie, the film, thus becomes not a tragedy, but a first-class horror story.
To say any more would serve only to take the keen edge off the many chills that De Palma has extracted from Lawrence Cohen's understated screenplay. From very similar basic ingredients, the 36-year-old director has created a story as dark as American Graffiti was light.
With Carrie, De Palma and his "real people" give The Omen some solid competition for the title "Horror Hoo-rah of 1976," delivering shocks filmgoers won't soon forget.

AFTERWORD: Although Carrie featured "no big names" in 1976, a few of the folk De Palma hired would become better known. Nancy Allen, the movie's bad girl, starred in three more of the director's features (Home Movies, 1980; Dressed to Kill, 1980; Blow Out, 1981) during her time as the first Mrs. Brian De Palma (1979-84). Amy Irving, the movie's good girl, would star in De Palma's next picture, The Fury (1978), before going on to become the first Mrs. Steven Spielberg (1985-89). Good boy William Katt achieved some fame for his three seasons as television's The Greatest American Hero (1981-83), while bad boy John Travolta would receive rather more acclaim following four seasons of Welcome Back, Kotter (1975-79). Finally, there was Carrie, herself. Sissy Spacek earned an Academy Award nomination for her performance, the first of six she has received to date. She would take home the Oscar in 1981 for her acting (and singing) in the role of Loretta Lynn in the biopic Coal Miner's Daughter.