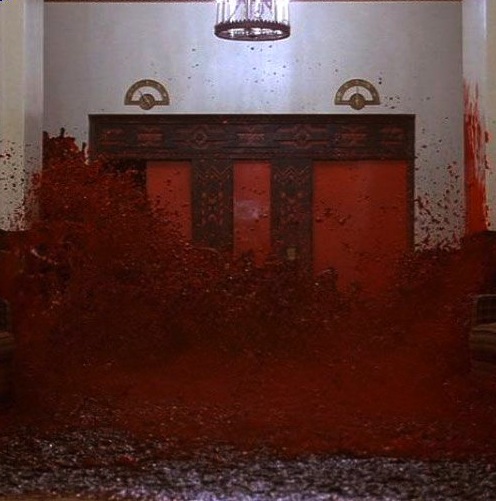 King, by way of Kubrick


Yesterday [Fri., Oct. 18, 2013], filmgoers got their first look at director Kimberly Peirce's remake of Carrie, and Reeling Back recalled Brian De Palma's 1976 original. Remembered as the first screen adaptation of a novel by Stephen King, its success (together with the best-selling author's own prolific output), led to a Hollywood subgenre — the Stephen King movie — that currently includes more than 65 theatrical features, direct-to-video films, made-for-TV movies, series or mini-series. In 1980, the serious critics' darling Stanley Kubrick contributed to the list with an adaptation of King's third novel, 1977's The Shining. Though I can be serious, I've never aspired to Serious status, and so had no trouble dismissing Kubrick's over-the-top pandering to a class of film fans he so obviously despised. In the process, I offered up my own mini-history of recent horror film history (1974-80). So far, our look at King-inspired films has included two of the best: Carrie and David Cronenberg's The Dead Zone. Today, our second posting is a review of Fraser Heston's made-in-Vancouver adaptation of Needful Things.

Sunday, June 15, 1980
THE SHINING. Written by Stanley Kubrick and Diane Johnson, based on the 1977 novel by Stephen King. Music by Bela Bartok. Directed by Stanley Kubrick. Running time: 146 minutes. Restricted entertainment with the warning: "Some gory and frightening scenes, nudity and coarse language."
AXE MURDERS. EVIL HOUSES. Children who possess psychic powers. Ghosts.
How the mighty have fallen. In The Shining, Stanley Kubrick — a name once spoken in the same hushed tones as Bergman and Fellini — delivers up a schlocker.
Kubrick, hailed as a genius after Dr. Strangelove (1963), as a prophet in the wake of 2001: A Space Odyssey (1968) and as an artist following A Clockwork Orange (1972), is looking more and more like a has-been. Not only is The Shining crass, crude and derivative, it's about five years too late.
It's not hard to figure out why he did it. Clearly, Kubrick is trying to save a floundering career.
His last film, Barry Lyndon (1975), was as uncompromising as it was unsuccessful.  lts "art" was lost on the paying customers and the result was an expensive flop.
It made sense to follow such a failure with a solidly commercial picture. So, like any other cash-conscious producer, Kubrick put together a saleable package.
He began with a property: Stephen King's best-selling terror tale, The Shining. Then he signed an Oscar-winning star, Jack Nicholson,  an actor who just happens to have started out in no-budget screamers.
Nicholson plays Jack Torrance, a would-be writer with a powerful need to get away from it all. Moving from Vermont to Boulder, Colorado, he applies for a job at the Overlook Hotel, a  job that promises five months of peace and quiet,
A mountain resort, the Overlook closes down during the winter. Torrance and his  family will act as live-in caretakers.
Oh, just one thing, says hotel manager Stuart Ullman (Barry Nelson). In 1970, our caretaker had a bad bout of cabin fever. He took an axe to his wife and two small daughters, then blew his own brains out with a shotgun. Knowing that sort of thing doesn't bother you, does it?

Kubrick has been disappointed with his audiences of late. The year that he offered us Barry Lyndon (based on an 1844 novel by William Makepeace Thackeray), people preferred standing in line to see Jaws (from the 1974 novel by Peter Benchley). This year, he  seems determined not to overestimate filmgoers' intelligence.
Lest we miss the point of the hotel manager's macabre story, Kubrick cuts immediately to the Torrance family home. There, we meet Jack's wife Wendy (Shelley Duvall) and pre-teen son Danny (Danny Lloyd).
Danny, wouldn't you just know it, has a secret friend. He's called Tony and he lives inside Danny's mouth. Unbenownst to Mom and Dad, Tony tells Danny things.
Tony tells Danny that he doesn't want to go to Overlook. To underscore the point, Tony gives Danny (and the audience) a vision of two nasty looking little girls standing hand-in-hand in a hotel corridor.
In case you miss the first point, Tony offers up a second, less subtle vision. We see a lobby and two elevator doors. One of the doors opens and about 12,000 gallons of blood sluices out at us.
Director Kubrick has the reputation of being something of a recluse. Since he appears to have missed the great horror revival of the 1970s, let's pause for a moment, and bring him up to date.

SINCE 1974, shriek freaks have seen several kinds of film competing for their attention. These include:
√    the devil-as-villain picture, a category that neatly subdivides into demonic-possession movies  (for example, 1973's The Exorcist) and Satan-incarnate epics (The Omen, from 1976).
√    the psychic-powers picture, such as Carrie (1976) or The Fury (1978);
√    the homicidal-maniac movie, represented by Halloween (1978) and Friday the 13th (1980);
√     the old-dark-house melodrama,  a category that includes pictures like 1979's The Amityville Horror and The Changeling (1980);
All of the above-named films were money-makers. The horror revival happened because William Friedkin's trend-setting Exorcist proved that a big budget, all-the-stops-out screamer could become a top grosser and vie for Oscar honours as well.
Pictures like The Omen,  Carrie and Halloween introduced audiences to significant new directing talents (Richard Donner, Brian DePalma and John Carpenter), young men with an awesome feeling for visceral mood-making.
Then there were the hangers-on, the schlockers and the cash-in pictures, movies like Stuart Rosenberg's everything-but-the-kitchen-sink  Amityville Horror. Rosenberg's picture made a huge bundle of dollars and no sense at  all.

The Shining is Stanley Kubrick's Amityville Horror. It shows that, like Rosenberg, he is more interested in effects than logic, more concerned with superficial shocks than sustained mood.
Last year on these pages [1979], I complained that The Amityville Horror, a two-hour feature, was like a balloon that burst before it was fully inflated. Rosenberg heaped so much information on us — much of it contradictory — that the senses overloaded and the mind tuned out. Past that point, his picture became an exercise, not in suspenseful entertainment, but in audience endurance.
The Shining has all of the same faults and is nearly half an hour longer. Making matters even worse is Jack Nicholson, an actor whose effective emotional range here runs the gamut from ratty to repulsive.
I think we are supposed to feel for Jack Torrance. I think we're supposed to see him as a desperate little man trying to extricate himself from his own failings, a man on the edge of madness who needs but a nudge to tip him into the abyss.
As directed by Kubrick, Nicholson never elicits a moment of sympathy. An actor who started out playing in the same stock company as Bruce Dern arid Dennis Hopper, he turns in the sort of overstated performance that would have been an embarrassment in a Roger Corman film.
Instead of being troubled by the effect the hotel has on him — he's on a first name basis with a number of the spooks — Nicholson's Torrance seems to relish it. He gives in to its influence without any kind of a fight,  apparently welcoming the opportunity to go looney tunes before our very eyes.
It's a performance full of self-indulgence and church basement self-satisfaction, I almost expected him to cross his eyes, turn to the camera and say "hi, Mom!"
The Shining,  "a Stanley Kubrick film," is being taken seriously by lot of people. Just between you and me, though, Dawn of the Dead (1978) was a better picture.

AFTERWORD: Yes, Vancouver audiences endured the uncut, 146-minute original release version. And, yes, I still think that Dawn of the Dead, writer/director George Romero's sequel to his own Night of the Living Dead (1968) is a better picture. For one thing, Romero managed to redefine the zombie film, arguably one of the 21st century's most lively horror genres. For another, his 1978 feature inspired a 2004 Canadian remake that not only starred one of this country's finest young actors, Sarah Polley, but included a subtle critique of consumer culture.