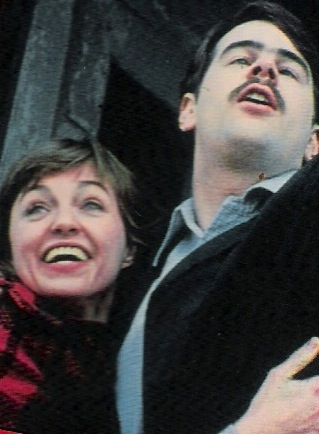 Shirley (Mary Ann McDonald) sees much to like about Ray (Dan Aykroyd) even though he can't see her at all, in Rex Bromfield's 1977 comedy Love at First Sight.


Aujourd'hui (July 1) est la Fête du Canada, comme on dit dans la belle province. It's Canada Day in the rest of the country, too, but English Canadians just don't celebrate the nation's birthday with the same sense of style. Instead of yet another beach barbecue, we should be telling the stories of some remarkable Canadians actually born on the first of July. In 1941, par example, the Nobel Prize-winning economist Myron Scholes was born in Timmins, Ontario, the same year that hockey legend Rod Gilbert was born in Montreal. Scholes was honoured for his work on the valuation of derivatives, while right-winger Gilbert was the first New York Ranger to have his number (it was 7) retired. Actress Geneviève Bujold (b. 1942; Montreal) is, of course, a living national treasure of Canadian cinema. Justice Rosalie Abella (1946; Stuttgart, Germany) is one of only seven women appointed to the Supreme Court of Canada. Parliamentarian Deborah Grey (1952; Vancouver) was a driving force in the "unite the right" movement of the 1990s that reshaped our federal politics for a generation. Actress Pamela Anderson (1971; Ladysmith, B.C.) enjoys international celebrity and is an activist for animal rights. And then there is comedian Dan Aykroyd (1952; Ottawa), who made his feature-film debut in director Rex Bromfield's 1977 comedy Love at First Sight.

Wednesday, September 7, 1977.
LOVE AT FIRST SIGHT. Music by Roy Payne. Written and directed by Rex Bromfield. Running time: 85 minutes. Mature entertainment.
SOMEBODY SHOULD HAVE TOLD Rex Bromfield that it's not nice to make fun of the blind. Movies, by nature entertainment for the eyes, have always treated blindness with an edgy respect.
Until recently, there have been just two approved methods for dealing with the problems of the sightless. One is sticky sentimentality.  Remember the  syrupy performance given by Edward Albert, as the young balladeer in 1972's Butterflies Are Free, or Elizabeth Hartman, stringing pearls in A Patch of Blue (1965)?
The other approach is empathetic terror. Audiences cringed while sadistic killers stalked sightless Audrey Hepburn in 1967's Wait Until Dark, Mia Farrow in See No Evil (1971) and Mia's sister Tisa in the Montreal-made Strange Shadows in an Empty Room (1976).
Mel Brooks was among the first to play blindness for laughs. One of the funniest scenes in his Young Frankenstein (1974) featured Gene Hackman as a blind hermit. And, naturally, Brooks's disciple Marty Feldman has a blind Foreign Legionnaire in his current The Last Remake of Beau Geste.
Until Bromfield, though, no one ever tried to build an entire picture around the comic misadventures of someone who is loveably sightless. That, however, is the spirit in which he offers us Roy (Dan Aykroyd), the blind hero of his debut feature, Love at First Sight.
It's not an easy spirit to establish. Roy, a former barber who once sat staring too long  at a solar eclipse, is a particularly bland character. His single virtue, as played by Aykroyd, is a kind of doltish determination.
Roy is working in a china shop (!) when Shirley (played with nervous intensity by Mary Ann McDonald) comes stumbling into his life. For reasons we can only guess at, she is immediately smitten.
They begin keeping company, an arrangement that meets with the approval of her dotty grandmother (Jane Mallett), but is resisted by her father Frank (George Murray), who owns a filling station.
Originally conceived as a short subject, Love at First Sight grew out of a 30-minute film that was eventually shown on CBC-TV. Impressed, Toronto's Quadrant Films gave Bromfield the opportunity to turn his idea into a feature film.
Unfortunately, the extended version has the look of a padded-out revue skit. Its characters, including an effeminate pet store proprietor played by a bewigged Barry Morse, are overdrawn caricatures. The plot, in which grandma finances the lovers' flight to Niagara Falls, is a patchwork of  grafted-on gags.
To his credit, Bromfield creates some genuinely funny (you should pardon the expression) sight gags. Indeed, I laughed harder at his film than at Feldman's big-budget Beau Geste parody.
On the other hand,  he fails to follow through on some of his more elaborate constructions. The china shop sequence, for example, ends much too abruptly, an example of cinematic destructis interuptus that is guaranteed to leave his audience unsatisfied.
Later in the film, Shirley and her grandmother clean up Roy's carefully laid out apartment, cheerfully rearranging the blind man's furniture. The comic results are left almost entirely to the viewer's imagination.
In each case, Bromfield errs on the side of restraint, something unusual in a new director. It's even more unusual when you consider the outlandishness of his characters and premise. And unwise.
*    *    *
ANOTHER CHICKEN JOKE?  — Missing from the credits of Rex Bromfield's Love at First Sight is any word of thanks to the Canadian Film Development Corporation. Apparently the federal film-funding agency had no part in the financing of this comedy.
So, where did the investment money come from? Well, by my unofficial count the movie contains five distinct Kentucky Fried Chicken jokes, including a guest appearance by the Colonel himself. It could be a coincidence, or it could be an impressive example of poultry power.

Afterword: One of the disadvantages of being a working film critic in the cinematically exciting 1970s was that I didn't stay in much. One result was that I hardly ever watched television, so I'd not seen Ottawa-born Dan Aykroyd's breakthrough to stardom on NBC's cult comedy show Saturday Night Live (1975-1979). Though he didn't make much of an impression in Rex Broomfield's low-budget Love at First Sight, two years later he was part of the Canadian contingent — a group that included John Candy and Joe Flaherty — in Steven Spielberg's multimillion-dollar comedy 1941. And then he was everywhere, playing starring roles in The Blues Brothers (1980), Neighbors (1981), Doctor Detroit, Trading Places (both 1983) and Ghostbusters (1984).
So far in his 40-plus years in the movies, Aykroyd has acted in some 70 features, setting a personal record of six pictures released in 1996. And that does't include his TV work, musical appearances —he is, after all, a Blues Brother — business ventures or charitable work. In 1996, he returned to Canada to star in The Arrow (1997), a CBC-TV miniseries that told a politically-charged tale of the Canadian aerospace industry in the 1950s. He also was seen as the host of the four-season (88  episode) Psi Factor: Chronicles of the Paranormal, a 1996-2000 television series created by his younger brother, Peter Aykroyd, and filmed on Toronto and Vancouver locations. Dan Aykroyd, who has a cameo role in the Ghostbusters reboot being released on July 15, turns 64 today (July 1); his homeland is celebrating its 149th birthday.

See also: Other Dan Aykroyd features reviewed in the Reeling Back archive are 1993's Coneheads, based on characters created for Saturday Night Live, and Exit to Eden (1994), adapted from the novel by Anne Rice.