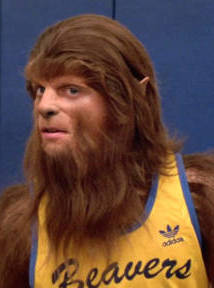 
Today (October 26), as we near All Hallows Eve, lupine rights advocates celebrate Howl at the Moon Night. Intended to raise awareness of the endangered state of wolves in the wild, it also draws attention to such entertainment oddities as director Rod Daniel’s 1985 comedy Teen Wolf.

TEEN WOLF. Co-written by Joseph Loeb III and Matthew Levinson. Music by Miles Goodman. Directed by Rod Daniel. Running time: 92 minutes. Mature entertainment with the B.C. Classifier's warning: occasional very coarse language, nudity and suggestive scenes. SCOTT HOWARD (MICHAEL J. FOX) has more than his share of growing pains. Outwardly a normal, healthy high school senior, he wants to be more than average, and is afraid that he may be something less than human.
A small town teenager, Scott is another one of those nerdy-nice kids in recent comedies whose adolescent anxieties are played for laughs. In common with the others, he has an obnoxious best friend, Stiles (Jerry Levine), a hopeless crush on a sophisticated blonde beauty, Pamela (Lorie Griffin), and a blind spot for Lisa (Susan Ursitti), the pretty, understanding brunette who loves him truly.
What is supposed to separate Scott's story from the rest of the pack are his body's unique responses. Under stress, you see, this lycanthropic lad turns into a Teen Wolf.
In a season of cinematic sameness, screenwriters Joseph Loeb III and Matthew Levinson manage a small inspiration. Perhaps recalling the 1957 feature I Was a Teenage Werewolf (in which 19-year-old Michael Landon made his first audience impact), they attempt to give their screen hero something to really howl about.
Having come up with the idea, though, they are at a loss to develop it. Unlike British director Neil Jordan, whose recent The Company of Wolves used were-imagery as a striking metaphor for sexual maturation, Teen Wolf is just a hirsute replay of the standard high school hormones plot.
Breaking with established tradition, Scott's transformations are neither induced by the full moon, nor accompanied by blood lust. The first full-scale appearance of The Wolf occurs on the basketball court, where the Beacontown Beavers are suffering an expected humiliation at the hands of a better team.
As it turns out, The Wolf (doubled by Jeff Closser) is a contender. Instead of going for the throat, he heads for the hoop, a powerhouse player capable of sinking a basket every time. Even blonde Pamela Welles is impressed.
With what amounts to loopy liberalism, the picture suggests that its werewolf is just another member of an ethnic minority. Far from scaring his peers, The Wolf’s demonstration of athletic process wins Scott popstar status, and the previously unattainable Pamela. Then, of course, he has to worry about whether they all love him for himself, or his stylish lupine image.
A formula feature, Teen Wolf seems to have been rushed into theatres to take advantage of actor Fox’s visibility in this summer's major hit, Back to the Future. Lightweight and undistinguished, it has neither the originality nor the polish to attract much attention on its own.


The above is a restored version of a Province review by Michael Walsh originally published in 1985. For additional information on this archived material, please visit my FAQ.

Afterword: Lightweight and undistinguished as it was, Teen Wolf managed to make a big impact on Connecticut-born TV producer Jeff Davis. In 2011, he pitched the idea of a Buffy-the-Vampire-Slayer-like series based on the 1985 feature to the MTV network. The show premiered in June and lasted six seasons (2011-2017). Among the many differences from the film is the fact that the small screen's Teen Wolf, Scott McCall (Tyler Posey), plays on his high school’s lacrosse team. I have to wonder if series creator Davis was aware that lacrosse (Canada’s official national sport) was a First Nations invention. Or, by including it in his show, he perhaps was asking us to think about how cultural attitudes towards wolves differ in the Native American and European traditions.
North America was colonized by people who brought with them the folklore of “the big bad wolf,” a monster who posed a threat to little girls, their grannies and industrious, house-building pigs. Whether alone or in packs, wolves were ravenous beasts, creatures to be reviled and exterminated. It wasn’t until 1974 that attitudes shifted enough for the U.S. government to realize that C. lupus was seriously threatened, and deserved the protection of the Endangered Species Act. By contrast, the continent’s native peoples were more favourably disposed to the creature, an integral part of many of their spiritual systems. Considered a medicine being, the wolf is often associated with courage, strength, loyalty, and success at hunting. Among the first feature films to note the importance of the wolf to First Nations cultural practice was director Jack Darcus’s Vancouver-made The Wolfpen Principle (1974).
Among the folk promoting the annual Howl at the Moon Night are conservationists concerned about a March 2019 initiative by the U.S. Fish and Wildlife Service to remove the gray wolf from the endangered species list. The move, the result of lobbying by Western ranchers, is in keeping with the general anti-environmental tone of the Trump administration, and suggests that the current American president may have gotten a bad scare from watching 1941’s The Wolf Man on late-night TV.