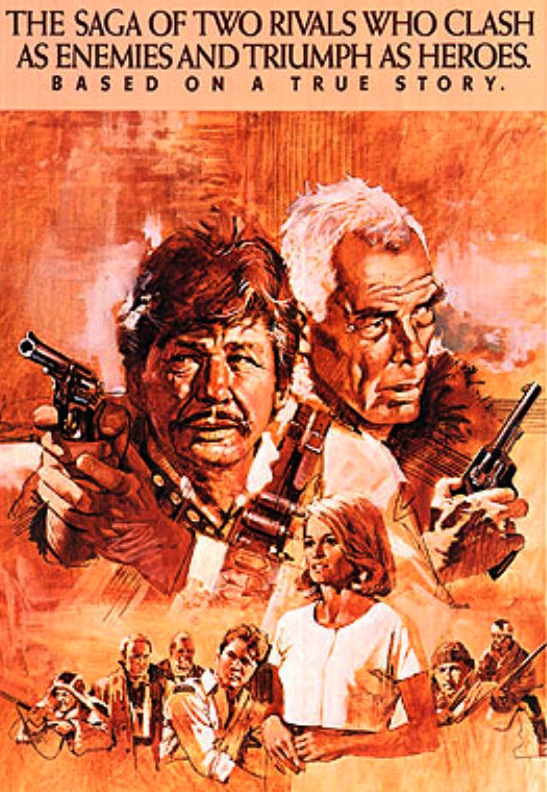 Charles Bronson, Lee Marvin and Angie Dickinson are featured on the theatrical release poster for Death Hunt, a 1981 adventure bearing no relation to historical truth.


Falsifying history for fun and profit


On this day (February 17) in 1932, the fugitive "mad trapper of Rat River" died in a gun fight with his RCMP pursuers. The subject of a media circus in its day, the story passed into legend, one mangled beyond all recognition in director Peter Hunt's 1981 feature Death Hunt.

THEY'RE FEELING PUT-UPON AGAIN at RCM Police Headquarters. First it was reports about bugging, then the break-ins and barn-burnings.
Now, heaven help us, it's Bronson. An international film consortium is making a Mountie movie, and Charles Bronson is to star.
Arctic Rampage, due to go before the cameras in Alberta on March 3, [1980] is based on "the true story of legendary Albert Johnson who, in 1932, became the object of the biggest manhunt in the history of the Royal Canadian Mounted Police.
Well, all right. In his 1957 book The Living Legend, Alan Phillips did call the Johnson case "the most sensational hunt in the history of the North." The facts, according to police historian Phillips:
On December 31, 1931, a lone trapper wintering at the mouth of the Rat Canyon, some 80 miles from Aklavik, shot and seriously wounded RCMP Constable A.W. King. Suddenly, a stranger called Albert Johnson — no one knew his real name  — became "the mad trapper of Rat River."
The chase was on. Johnson fled overland towards Alaska. On January 29, 1932, he shot and killed Constable Edgar "Newt" Millen, 30.
By this time the police, led by Inspector Alex Eames, 45, had called in air support. Bush pilot and former First World War flying ace Wilfred "Wop" May joined the search.
After 48 days, and a pursuit that ranged over 150 miles north of the Arctic Circle, Johnson died in a gun battle. The manhunt, the first in Canada to use aircraft, passed into legend.
OK, the historical facts are reasonably straightforward. The casting of Arctic Rampage, on the other hand, suggests a rather fanciful screenplay.
Bronson, 59, a superstar who plays broodingly heroic figures, is cast as the fugitive cop-killer. Lee Marvin, who will be 56 next Tuesday [February 19, 1980] is set to play "an  RCMP officer," presumably based on Inspector Eames.
Joan Collins, who will be 47 this May, is in to provide "romantic interest." Peter Hunt, a former film editor whose most recent pictures (Gold and Shout at the Devil) were shot in South Africa, will direct.
A Golden Harvest Production, Arctic Rampage is budgeted at $10.5 million. The executive producers are Chinese (Raymond Chow of Hong Kong) and American (Albert Ruddy), with a Canadian (Murray Shostak) serving as producer.

HISTORY, IT'S NOT. The suggestion that Death Hunt is "a true story" is a film publicist's fantasy, fraudulent foolishness and a flat-out lie.
The good news is that it's not a bad movie. As an action-adventure item, Death Hunt delivers the kind of tense, tough-talking frontier dramatics that audiences expect from movies starring Lee Marvin and Charles Bronson.
Death Hunt, shot in Alberta last year as Arctic Rampage, is a difficult picture for a Canadian critic to deal with. On one hand, I have an emotional commitment to historic truth, the National Dream and the mythic heroism of the Royal Canadian Mounted Police.
On the other hand, like the Mounties I grew up believing in, I must be firm but fair.
Fair first.
Movies are a reflection of the periods during which they are made, not the periods in which they are set. Death Hunt may take place in 1931-32, but it is a comment on the 1980s.
Here is a hard-edged story of hard times. Ideals collide with violent reality, technology with hard-won individual skills, sensitivity with savagery.
The opposing elements are introduced in the film's opening scenes, set in the Yukon Territory in November, 1931. A lone stranger (Charles Bronson) with the initials A.J. tooled on his holster comes upon a crowd of men betting on a dog fight.
The stranger stops the fight and humiliates Hazel Sutter (Ed Lauter),  owner of the losing dog. The stranger, later identified as Albert Johnson, forces Sutter to sell him the bloodied beast.
The scene shifts to the Rat River settlement. Resplendent in his new Stetson and scarlet tunic, newly-minted RCMP Constable Alvin Adams (Andrew Stevens) reports for duty. Here, though, he finds a world unlike anything in his training manual.
Sergeant Edgar Millen (Lee Marvin), his seedy superior officer, is a boozy, embittered pragmatist, a man with little regard for regulations or "the pen pushers back in Edmonton." The economic Depression has filled his territory with "savages" and "misfits" and he's not interested in stopping illegal dog fights because "it keeps them from killing each other."
Millen and Johnson are men of a kind. One with the land, they hate the "progress" that's destroying their frontier.
Johnson, identified as a First World War hero with "special training," is a civilian, so he can retreat further and further into the wilderness.  Millen, unfortunately, is bound by his oath to King and country, so his only escape is into a bottle and his cynicism.
They come into conflict when the vengeance-seeking Sutter leads a contingent of local toughs in a raid on Johnson's cabin. A man is killed, and Millen must lead the posse in pursuit of the taciturn trapper.
Screenwriters Michael Grais and Mark Victor, both 33, grew up in the affluent Chicago suburbs, seen in Robert Redford's Oscar-winning Ordinary People (1980). Their script tells its story from the point of view of Constable Adams, the rookie cop who will mature and become properly "uncivilized" during the death hunt.
The film also marks the maturation of London-born director Peter Hunt. A former film editor, Hunt made his directorial debut with the 1969 James Bond feature, On Her Majesty's Secret Service.
In recent years, he's worked in South Africa, producing such turgid items as Gold (1974) and Shout at the Devil (1976), films that relied heavily on complex plotting and stories of international intrigue.
Death Hunt, by contrast, is a straightforward pursuit tale, the sort of classic western plot that lends itself to the brand of brisk visual story-telling at which an imaginative former movie editor can excel.
Since his story is larger than life, Hunt cast a pair of archetypes, the director-proof team of Bronson, 59, and Marvin, 57. Like Sam Peckinpah, Hunt surrounds his central characters with cannon fodder, a collection of unattractive and expendable grotesques who will get themselves shot up as the picture progresses.
Excellent of its type, Death Hunt turns a lean, efficient script and spare, tight direction into a satisfying bit of action entertainment.
Now for the firmness.
British Columbia film classifier Mary-Lou McCausland should recall Death Hunt. She should either require that the film's distributor, Twentieth Century-Fox, remove the title card that fraudulently claims "this motion picture is based on a true story," or require the picture's advertising to bear the warning "a total fiction bearing not the slightest relationship to any event, incident, person or institution in this country's history."
Canadian Odeon Theatres should have the taste and good grace to remove the fraudulent "based on a true story" line from all of their advertising. This newspaper's advertising department should demand its removal.
The family of the late Edgar Millen, the RCMP constable who died heroically at the age of 30, should sue the producers and distributors for using the name of an historic figure for their fictional character. Fox will have to answer for their published description of Millen as "a disillusioned, whiskey-swilling RCMP officer marking time until his retirement."
The RCMP should pay all of the Millen family's legal costs and, perhaps, co-sue.
Finally, somebody should kick Death Hunt's Canadian producer Murray Shostak in the butt for not insisting that the film's press kit include biographies of the picture's corps of Canadian supporting players, among them Vancouver's Scott Hylands, Henry Beckman, Maury Chaykin, August Schellenberg and Tantoo Cardinal.
Aside from that, I liked the movie

The above are restored versions of a Province advance feature and review by Michael Walsh originally published in 1980 and 1981. For additional information on this archived material, please visit my FAQ.

Afterword: With the exception of documentary, no movie genre is required to tell the truth. The purpose of the commercial film business is to maximize ticket sales, and the best way to do that is to make entertaining movies. Inevitably, controversy ensues when a filmmaker attempts to recreate historical events or makes the claim that his or her work is "based on a true story." In 1976, shortly after the release of All the President's Men, I chatted with director Alan J. Pakula about how he shaped the truth of a non-fiction account of the Washington Post's Watergate investigation into the reality of his movie adaptation. Pakula got it right, and his film remains a classic.
Director Peter Hunt was making a different kind of movie. As a newspaper film critic, my first job was to advise readers on a given picture's entertainment value. Overall, I assumed that most claims of "truth" were taken with the proverbial grain of salt by the big studios and audience alike. In the case of Death Hunt, though, I really believed the publicists had crossed the line. Had they not been so insistent upon their "truth" claim, I probably would have viewed it as just another gun-happy frontier bromance, a spaghetti western set in the far north. They did, so I couldn't.
Somewhere between the production announcement cited in my 1980 feature story and Death Hunt's 1981 release, Angie Dickinson replaced Joan Collins as Lee Marvin's love interest in what was their third (and last) screen pairing. No one noticed because the picture's main casting focus was on the reunion of Marvin with Charles Bronson. In their previous meeting, Bronson had been part of the team assembled by Marvin in 1967's The Dirty Dozen. In the years between, Bronson become a major star. Not only did he get top billing in Death Hunt, but the picture's name was changed to echo that of his biggest hit, 1974's Death Wish.

See also: In 1885, when the RCMP was still called the North West Mounted Police, its officers undertook a manhunt for a fugitive Cree named Almighty Voice. Director Claude Fournier's 1974 feature Alien Thunder was based on that true story.