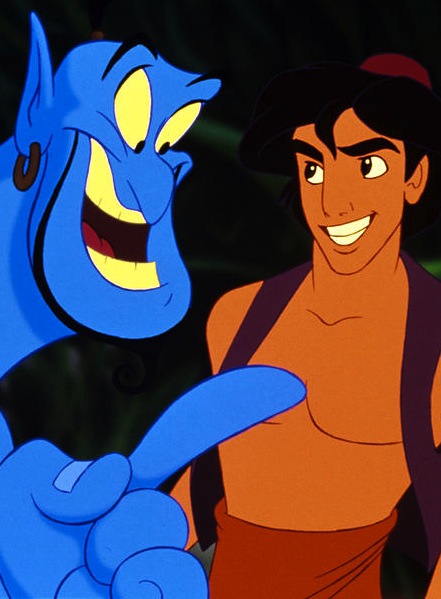 Free of his imprisonment in the lamp, the Genie (Robin Williams) explains the rules of wishing to the would-be Prince Ali (Scott Weinger) in 1982's Aladdin.


After proving himself a master of stand-up comedy and becoming a TV and film star, Robin Williams looked about for new worlds to conquer. Born on this day (July 21) in 1951, Williams burst forth as a driving force in feature animation, giving voice to the magic in 1992's Aladdin.

"WOW!" SAYS THE GENIE with the light blue hue. It's his first time out of the lamp in 10,000 years and "does that feel good! "
So, what do you say, Genie? "Nice to be back, ladies and gentlemen. Hi!"
Wow, says this critic, banishing his post-vacation blues. This new animated Aladdin is more than good.
Fast-paced and genuinely funny, it's the best thing out of the Mouse factory in nearly 40 years. What I say is, it's nice to be back and able to report that the lacklustre lot currently running Disney's cartoon shop finally got it right.
Dipping into Antoine Galland's Arabian Nights, a screenwriting committee came up with the story of Aladdin, the lad who makes his fortune and wins the love of a princess with the help of a wish-granting desert demon.
Personally, I didn't expect a whole lot. After all, last year these same people cobbled together that sappy, adolescent no-brainer, Beauty and the Beast.
Before that, they perpetrated something called The Little Mermaid,  an amoral, animated ad for fish-tailed Barbie dolls. What could possibly go right this time?
The answer is Robin Williams, the only genie we'll ever need. Williams is a non-stop, high-octane, incredibly inventive, every-time-a-bullseye comic force of nature, and the best thing to happen to cartooning since Mel Blanc.
Earlier this year, his flaky fledermaus stole the show in Ferngully . . . The Last Rainforest.  Williams's voice performance appeared to have driven his animators into a creative frenzy, resulting in a terrific show.
He's done it again in Aladdin. His genie is a total gas, a shape-shifting game show host "direct from the lamp! Right here for your wish fulfillment! Three wishes to be exact — and ixnay on wishing for more wishes!"
Now this is classic cartoon fun, with tradional Disney touches informing our Genie's ethics. On his offer, for example, "there are a few limitations.
"Rule No. 1 — I can't kill anybody, so don't ask. Rule No. 2 — I can't make anybody fall in love with anybody else. Rule No. 3 — I can't bring people back from the dead.
"Other than that, you got it!"
Thank goodness somebody finally re-ignited the flame of cartoon inspiration at Disney. It's as if Aladdin were the work of some well-meaning, but desperately ordinary, 1950s Broadway musical director who arrived in Hollywood expecting to work for MGM but ended up at the Warner Brothers' animation shop instead.
Instead of working on harem-pants epics with the likes of Piper Laurie and Tony Curtis, he entered into a collaboration with the Looney Tunes crew. And lo, along with the genie, the just-for-fun magic came back.

Afterword: Ailing and severely depressed, Robin Williams committed suicide on August 11, 2014. Though his voice was stilled, our enjoyment of it continued with the December release of director Shawn Levy's Night at the Museum: Secret of the Tomb, Williams's final feature film appearance. His final performance as a voice actor was directed by Monty Python alum Terry Jones. Williams will be heard as Dennis the Dog, loyal advisor to the suddenly all-powerful earthling played by Simon Pegg, in the sci-fi comedy Absolutely Anything, scheduled for an August 2015 release.
Robin Williams had many friends in Vancouver. It was here that he spent time filming eight of his 13 shot-in-Canada features. His first working visit was for director Joe Johnston and the result was the 1995 board-game fantasy Jumanji. He returned to star opposite Al Pacino in Christopher Nolan's dark thriller, Insomnia (2002), then again for writer-director Omar Naim's even darker sci-fi feature The Final Cut (2004). Williams was back on the comedy road in RV, Barry Sonnefeld's 2006 tale of an all-American family vacation shot in B.C. and Alberta. Burnaby studio sets stood in for New York's Museum of Natural History, where Williams first brought the spirit of Rough Rider Teddy Roosevelt to life for director Shawn Levy in the 2008 fantasy Night at the Museum (2006).  Vancouver was one of many shooting locations for 2007's License to Wed (2007), the Ken Kwapis comedy that features Williams in a clerical collar. He returned twice more to reprise his hearty Roosevelt role for Levy — in 2009's Night at the Museum: Battle of the Smithsonian (2009) and Night at the Museum: Secret of the Tomb (2014). Williams's final film was, by coincidence the penultimate screen appearance of Mickey Rooney, who died in April 2014 at the age of 93. Levy ends his picture with a dedication.
“In memory of Mickey Rooney. And for Robin Williams: The magic never ends.”

See also: Among the other Robin Williams films currently included in the Reeling Back archive are his 1980 appearance as Popeye, his 1991 turn as the adult Peter Pan in Hook  and his debut as a cartoon voice actor, speaking for Batty Koda in the animated feature Ferngully: The Last Rainforest.