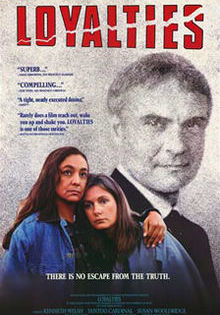 The alliance of Rosanne Ladouceur (Tantoo Cardinal) and Lily Sutton (Susan Wooldridge) to deal with the truth about David Sutton (Kenneth Welsh) is hinted at in a poster for director Anne Wheeler’s 1986 feature Loyalties.


No list of great Canadian filmmakers would be complete without the name Anne Wheeler. Born on this day (September 23) in 1946, Wheeler honed her craft at the National Film Board before breaking out as an independent writer-director with the intense 1986 feature Loyalties.

LOYALTIES. Written by Sharon Riis. Music by Michael Conway Baker. Co-written and co-produced and directed by Anne Wheeler. Running time: 97 minutes. Mature entertainment with the B.C. Classifier’s warning: occasional very coarse language and violence. DUTY CAN BE A BURDEN. In the case of Lily Sutton (Susan Wooldridge) it hangs about her like a foul odour, dulling her senses and making her well-scrubbed face a mask of misery.
A dutiful wife, Lily has come with her children to remote Lac La Biche to be with her husband. A competent, apparently dedicated doctor, David Sutton (Kenneth Welsh) has abandoned his urban British practice under somewhat mysterious circumstances to work “on the lip of civilization” in rural Alberta.
In marked contrast to Lily, with her precise English features, pronounced incisors and patrician speech patterns is native-born Rosanne Ladouceur (Tantoo Cardinal), a single mother living below the poverty line.
Their lives intersect when Rosanne’s drunken lover Eddy (Tom Jackson) belts her in the local beer parlour. Lily’s husband is called to stitch up her lip.
Hired as a mother’s helper for Lily, the angry, intense Métis woman discovers that she has much in common with the well-bred English “airhead.” What’s more, the lonely, profoundly unhappy Lily develops an unexpectedly strong fellow feeling for Rosanne.
Duty is not always unpleasant. Though the phrase “Canadian film” often makes a critic’s blood run cold, there have been a number of pleasant surprises among recent domestic releases.
Loyalties, written by High River’s Sharon (Latitude 55°) Riis and directed by Edmontonian Anne (A War Story) Wheeler, is the latest such pleasure. Shot on location in Lac La Biche with Alberta-born Cardinal and Welsh in co-starring roles, this strikingly crafted marital relations drama is Canadian in the best sense of the term.
Designed as a feminist parable, Riis’s original screenplay tells the story of two women from wildly differing backgrounds who find common cause in their womanhood. Both Lily and Rosanne have suffered abuse of one kind or another from the men whose children they’ve borne.
Under Wheeler’s assured direction, the film unfolds as a subtle suspense thriller with the precise nature of Dr. Sutton’s disgrace only revealed in the final reel. Faced with individual crises, the women derive unexpected strength from one another, strength that enables them to overcome their long-standing problems.
Serious without being stuffy, Wheeler’s first independent fictional feature is a keenly involving tale of growth and self-realization. Loyalties offers a first-rate performing ensemble in a fine, festival-class film.

Afterword: The Japanese, with a deep-seated respect for craft, recognize the best among them as “Living National Treasures.” The term is applied to those who have attained a “high mastery” of their art, and currently comes with an annual grant of ¥2 million (approximately $20,000 US). The closest we come to such an honour is the Order of Canada, a medal awarded for “outstanding achievement, dedication to the community and service to the nation.” In 1995, filmmaker Anne Wheeler became an Officer of the Order. Posted on the Governor General’s website, the citation reads: “A pioneer in the film industry in Western Canada, she has shared her artistic talents as a writer, broadcaster, performer, film maker, director, producer and teacher. Her unique body of work reflects the Canadian experience of the human condition . . .”
I was no longer on the film beat at the time of her investiture, so I had no opportunity to add my voice to the chorus of praise for an artist that I consider among Canada's living national treasures. I’d been impressed by her debut feature, the 1981 National Film Board docudrama A War Story, and gave her first independently-made feature, Loyalties, the rave review posted above. Wheeler’s 1989 home-front drama, Bye Bye Blues, is among my favourite films (and I play its soundtrack CD a lot). In early April, Vancouver’s Pacific Cinémathèque presented her 1999 romantic comedy Better Than Chocolate in its series called “The Image Before Us: A History of Film in British Columbia.” The event promised that the director would be in attendance, and I went along to the screening hoping to finally meet this remarkable woman.
The movie was even better than I remembered it. On May 9, I posted my somewhat belated review of the picture, an item original to Reeling Back and keyed to the birthday of its star, actress Wendy Crewson. The evening’s only disappointment was the absence of its director. Anne Wheeler was shooting a new picture — a TV feature called Stop the Wedding — in suburban Maple Ridge, and filming had run late. So while I was sitting comfortably, recalling such memorable Wheeler works as Cowboys Don't Cry (1988), Suddenly Naked (2001) and Edge of Madness (2002), she was out creating a new one.
Stop the Wedding aired June 10 on cable TV’s Hallmark channel, and Second Chances, a Wheeler-directed episode in the current Hallmark TV series Chesapeake Shores, is scheduled to air this Sunday (September 25, 2016). When the gritty CBC series Romeo Section returns for a second season in October, two of its eight episodes will be hers. Also included in this busy year is an October 22 gala in Toronto, during which the Directors Guild of Canada (DGA) will present her with its Lifetime Achievement Award. A B.C. resident since 1990, national treasure Anne Wheeler turns 70 today (September 23).