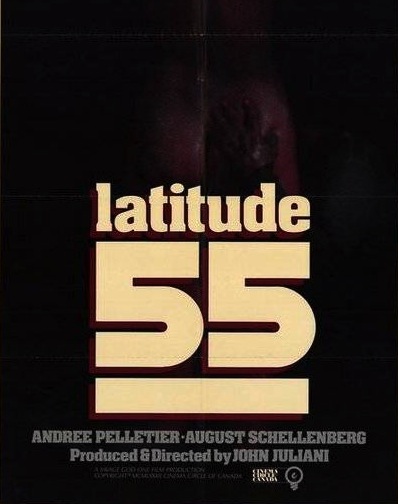 A promotional poster for writer-director John Juliani's 1982 feature omits the degree symbol from its title, Latitude 55°.


Caught in a blizzard of discovery


The founder of Vancouver's innovative Savage God theatre company, John Juliani was well established as an actor and teacher when he turned his hand to feature film direction. Born this day (March 24) in 1940, Juliani chose Alberta as the location of his 1982 drama Latitude 55°.

Monday, November 29, 1982.
LATITUDE 55°. Co-written by Sharon Riis and Anne Cameron. Music by Victor Davies. Co-written, produced and directed by John Juliani. Running time: 102 minutes. Mature entertainment with the B.C. Classifier's warning: some nudity, very coarse language and swearing. THE LADY IS IN DISTRESS. Angry and embarrassed — she should have paid more attention to the weather — she is stuck in her little car in the middle of nowhere in the middle of a snowstorm.
Fortunately, she has a rescuer. A man who lives alone in this wintery wilderness finds her and takes her to his isolated home.
The young woman's gratitude turns to fear when she realizes that she is less his guest than his prisoner.
Here is a story situation that might appeal to the author of  a Harlequin Romance. Come to think of it, there was a Harlequin novel a few years ago called Leopard in the Snow that set up its story just so.
In 1977, Torstar, the Toronto publishing conglomerate that owns Harlequin, attempted to break into the movies. Leopard in the Snow, a film starring Susan Penhaligon and Keir Dullea, was offered to the public as the first in a projected series of Harlequin feature film adaptations. It was not a success.
In 1980, John Juliani, whose controversial Savage God theatrical experiments generated headlines hereabouts in the late 1960s, was in Edmonton directing his first motion picture. Called Latitude 55°, it uses the same lady-in-distress plot device to bring together actors Andrée Pelletier and August Schellenberg.
An intense, densely-layered psychological drama, Latitude 55° will never be mistaken for a Harlequin Romance. Designed as an exploration of identity and reality, Juliani's picture is one of the most intensely individual English-Canadian productions yet.
Set in Northern Alberta, it opens with Wanda (Pelletier) caught in a blizzard near Lac La Biche, just a touch south of the 55th parallel. She drifts off to sleep in the numbing cold and we see Josef (Schellenberg) carry her to his cabin.
Who are these people?
"I work for Culture," she tells him when she wakes. "It takes me all over the province."
"How does one work for culture?" he asks. A subsistence farmer living without plumbing or electricity, he appears to have little in common with his genteel guest.
"lt's a government department," she explains. "Like Health, or Welfare."
Juliani, who collaborated with Sharon Riis and Anne Cameron in the writing of the screenplay, knows something about "Culture." A graduate of Montreal's National Theatre School, he's acted in grant-supported theatre companies and developed many of his own projects with the help of "Culture" agencies. Latitude 55°, for example, acknowledges the participation of the Canadian Film Development Corporation.
Wanda's employment — she's a government grants officer — is no accident. Although her encounter with Josef is, on one level, the catalyst for an identity crisis, at another it can be read as an informed commentary on the state of Canadian culture.
Wanda, the self-confident bureaucrat, awakens to find herself facing an uncomfortable reality. She is frightened, grateful and just a touch condescending. She wants to be proper and gracious, but most of all, she wants out.
Josef, who speaks with an accent, identifies himself as a Pole, twice-married, 52, a veteran of the Second World War. "I am neither a whole man nor a happy man, he tells her, "but I get by."
That's not the whole story, though. As the film progresses, the line between fantasy and reality shifts constantly.
Josef assumes other accents and other identities. We hear him speak other languages, among them Cree, Greek, French and German.
"I dream standing on my feet here," Wanda complains at one point. "I think I've gone mad," she says at another.
"Are you mad?"
"No," he says. "We are alive."
It is as if Juliani had anticipated the current cultural policy debate and prepared Latitude 55° as his own audiovisual brief.
"Let go of your fear and anything is possible," Josef tells Wanda.
The picture doesn't have to have a political dimension. It is possible to watch the characters respond to one another and, as we learn more about Wanda and her eccentric host, follow the moments of cathartic release.
"When I was a little girl," Wanda says toward the end of the film, "no one told me what I had to give up to be safe." Like a patient in therapy, she confronts more and more of herself until, in a climax reminiscent of Paul Almond's 1973 film Journey, she discovers the final, shocking truth.
Juliani makes no attempt to be safe. No easy entertainment, Latitude 55° demands total audience involvement throughout.

Afterword: Latitude 55° had its world premiere on November 26, 1982, in Vancouver, John Juliani's hometown. In a February 1981 interview during his feature's  post-production, Juliani told me that the picture would need special handling to find its audience. He trusted its distribution to International Spectrafilm, and the new Toronto-based company founded to release art and specialty films did so with mixed results. Although the feature had limited theatrical bookings, it was was noticed by the Academy of Canadian Cinema and Television. Latitude 55° received six Genie Award nominations, including best picture. (The award went to The Grey Fox, the work of another Vancouver-based director, Phil Borsos.) Juliani and Sharon Riis were co-nominated for best screenplay.
August Schellenberg earned his second Genie nomination for his performance as Josef. Two years earlier, the Montreal-born actor had been a nominee for playing an accused killer whose controversial conviction was examined in the French-language L'Affaire Coffin. In 1991, Schellenberg won a Genie for his work in Australian director Bruce Beresford's historical drama Black Robe, in which he played the Algonquin chief Chomina. Latitude 55° also brought actress Andrée Pelletier a Genie nomination, her second in a career total of five.
The founder of the influential Savage God theatre company, John Juliani continued to be a leading member of Vancouver's stage community, actively involved as a performer, director and union representative. Latitude 55° remained his only feature film in the director's chair. His sudden death in 2003, at the age of 63, was a significant loss to the Canadian culture he tirelessly championed. In his honour, City Hall declared March 24, 2004 — his birthday — Savage God Day in Vancouver.