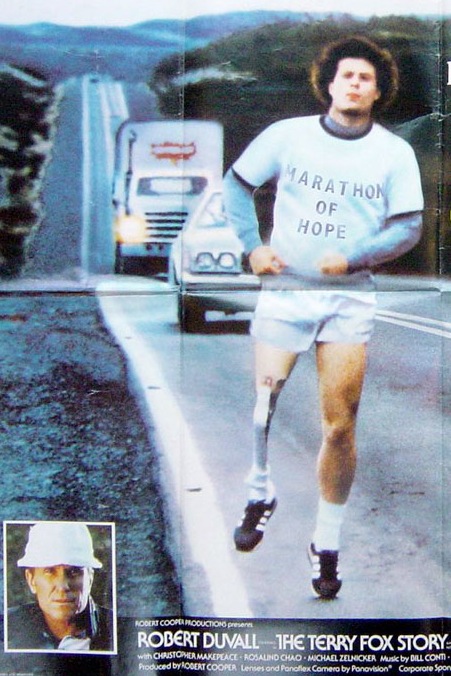 
Film not up to its subject's stature


On this day (April 12) in 1980, a one-legged youth from Port Coquitlam, B.C., began his "Marathon of Hope," a cross-Canada run to raise money for cancer research. His effort touched the nation and, in 1983, his tale reached the screen in a feature film, The Terry Fox Story.

Friday, May 27, 1983.
THE TERRY FOX STORY. Written by Edward Hume, based on a story by John and Rose Kastner. Music by Bill Conti. Directed by Ralph L. Thomas. Running time: 96 minutes. General entertainment with the B.C. Classifier's warning: some swearing and coarse language. IT'S NO BIG DEAL. Viewed dispassionately, The Terry Fox Story is pure cinematic Babbittry, a film made not to honour its subject, but to make a buck for its backers.
This sort of thing happens all the time. Fringe producers are forever scanning the headlines for suddenly prominent personalities, momentary trends or unexpected tragedies that can be fed into the exploitation movie mill.
In July, 1980, Terry Fox was in the news. His Marathon of Hope had reached Toronto and Canadian filmmaker Robert Cooper could not help but notice how deeply the young runner's courage had touched the nation.
On December 12, 1980, Cooper announced that his company, Robert Cooper Productions Inc., would make a feature film about the young British Columbian. The 22-year-old Fox was quoted as saying "I feel really good about Robert Cooper and this relationship."
The proof, as they say,  is in the pudding. Produced for distribution in the U.S. via the Home Box Office pay-TV system, The Terry Fox Story is an evening's inconsequential entertainment.
The screenplay is credited to Edward Hume, a Hollywood-based hack with a background in TV cop shows. It is, for the most part, a superficial stringing together of all the standard "big moments" required to produce a standard tearjerker built around a brave, tragic, terminally-ill hero.
When, following the amputation of his leg, Fox's spirits are at low ebb, a girlfriend appears on the scene. Rika Noda (Rosalind Chao) is a pretty, understanding teacher who works with problem children. The bland young woman we see on screen has little in common with the Rika Noda glimpsed in the published reports of Fox's life.
Since the formula doesn't allow for much individual analysis, Fox's announcement that "next summer I'm going to run across Canada'' comes right out of the blue. Hume  provides the character with a grouchy personality — not because it's authentic, but because that's what passes for "humanization of heroes'' on TV these days.
This kind of Hollywood homogenization is not designed to deal with uniqueness. Although director Ralph Thomas manages a beautiful visual image or two — Fox (Eric Fryer) alone on that endless highway, one man making a difference in an immense, indifferent land — his picture lacks the courage of its hero's convictions.
The result is tube-sized mediocrity, a film that ranks right up there with Death of a Centrefold, the 1981 TV movie about the life and death of Dorothy Stratten.
Vancouver filmgoers are likely to be more disappointed than most.
We knew that Terrence Stanley Fox was and is special. The Terry Fox Story isn't anything special at all.

Afterword: It was 35 years today (April 12), that Terry Fox dipped his prosthetic right leg into the Atlantic Ocean off St. John's, Newfoundland, to begin his cross-country run. It  was supposed to end with a similar gesture on Canada's Pacific Coast near Victoria, B.C. Though his personal marathon ended September 1, on the the Trans-Canada Highway outside of Thunder Bay, Ontario, the inspiration it engendered continues to this day. Cancer had cost Fox his leg. A second cancer cut short his run and, on June 28, 1981, took his life. He was 22.
In the Afterword to my review of 1983's Return of the Jedi, I mentioned my own fight with cancer. I received chemotherapy treatments in the same year and in the same B.C. Cancer Control Agency hospital ward as the then-19-year-old Terry Fox. Six years later, I could hardly view The Terry Fox Story dispassionately. And, yes, I was seething with anger as I pounded out the above review. It was my job to be fair to the movie, which was an adequate example of its genre. At the same time, I knew that its subject was a complex man of his own time, a genuine hero who deserved to be understood as well as honoured. I wanted his story told, not by movie-of-the-week hagiographers, but by genuine artists. We don't always get what we want.
Despite my less than enthusiastic review, The Terry Fox Story went on to be the big winner at the 1984 Genie Awards, receiving eight nominations and six trophies, including the best picture honour. First-time actor Eric Fryer took home the best actor Genie and, apparently deciding to quit while he was ahead, never made another feature film. The picture's major American star (as Fox's publicist Bill Vigars) was Robert Duvall, who'd made his big-screen acting breakthrough playing the Corleone crime family consigliere Tom Hagen in 1972's The Godfather. Duvall's other 1983 starring role was as a born-again country singer in director Bruce Beresford's Tender Mercies, for which he won the best actor Oscar. Qualifying as a fascinating footnote is the fact that The Terry Fox Story was the first feature film produced by cable broadcaster HBO. Among its unbilled extras (portraying Runner No. 7) was one Paul Bernardo, who later achieved infamy in real life as the serial-killer partner of murderess Karla Holmolka.