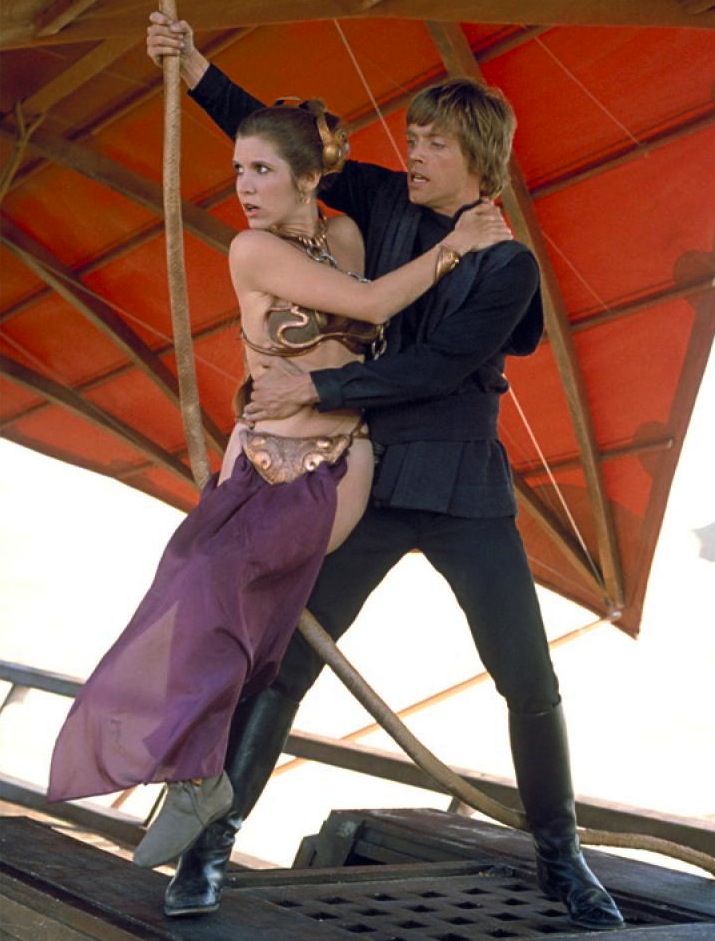 Reckoning with the force


It was on Wednesday, March 23, 1983, just nine weeks before the release of Star Wars: Episode VI - Return of the Jedi, that U.S. President Ronald Reagan proposed something called the "Strategic Defense Initiative," a program that has to date cost American taxpayers an estimated $274 billion. It involved a system of land- and space-based lasers capable of destroying incoming enemy missiles, a then non-existent technology that critics of the former corporate spokesmodel considered pure science fiction. They called it Star Wars, plucking a phrase from the popular culture, and making it part of the political discourse. That same year, Reagan took to calling the Soviet Union an "evil empire" (offering yet another insight into the depth of his geopolitical understanding). Politics aside, George Lucas's creation had made a lasting impression. Borrowing from the Walt Disney playbook, Lucas deliberately set out to build a cross-promotional empire in which his films would spin off licenced products such as records, toys, books, comics, television shows, video games and DVDs. All of these would guarantee interest in his next film, which would feature visual effects by Industrial Light and Magic, the special effects house that he founded in 1975.

Wednesday, May 27, 1983.
RETURN OF THE JEDI. Written by Lawrence Kasdan and George Lucas. Music by John Williams. Directed by Richard Marquand. Running time: 134 minutes. Mature entertainment with the B.C. Classifier's warning: some violence. In 70 mm and stereophonic sound.
A long time ago, in a galaxy far, far away . . .

IT WAS JUST SIX YEARS ago, at a few minutes past midnight on the morning of Friday, June 24 [1977]. A restive capacity crowd sat in the Vogue Theatre waiting for Vancouver's first look at the film Time Magazine had already called "the year's best movie."
The audience patiently endured a painfully long short subject extolling the wonders of scenic New Zealand. Then, the ten words quoted above appeared on the screen, and it was suddenly a Saturday matinee.
There was a spontaneous cheer, overwhelmed seconds later by a great blast of stereophonic brass.
STAR WARS.
Precisely two hours later, as the end credits scrolled up the screen, the mood was joyously buoyant. We'd all been present at a moment of excitement and awe.
Tuesday evening [May 24, 1983], an invitational audience gathered in the same theatre for the conclusion. They came, each and every one, expecting a good time.
Six years ago, my first nighter's enthusiasm was tempered by a polite, professional skepticism. Greybeard that I am, I could remember seeing the premiere version of Stanley Kubrick's 2001: A Space Odyssey (1968) in New York.
Kubrick's picture had put me to sleep. Could this George Lucas fellow do any better?
Yes, as a matter of fact, he could. His journey to the stars identified him as a major movie myth maker, a storyteller whose inventiveness was equalled by his ability as a film-maker and mass entertainer.
The second chapter in his Star Wars saga, The Empire Strikes Back, confirmed his skill. Not only did it maintain the pace and quality level of its predecessor, but it increased our involvement with its characters and their conflicts.
Between the second and third instalments, Lucas collaborated with Steven Spielberg to produce Raiders of the Lost Ark, another spectacular example of pure picture show fun.
In six years, his imprimatur has become the closest thing we have to an ironclad guarantee of cinematic satisfaction. Return of the Jedi only adds to the lustre of the Lucas name.
Star Wars is a phenomenon. It is already part of the contemporary cultural fabric, so much so that actually reviewing Return of the Jedi is rather like attempting literary criticism of the King James Version of the Bible.
lt's possible. But, just as formal literary criticism is unlikely to affect the level of devotion accorded Scripture, noting the the occasional presence of obvious matte lines in Jedi won't affect public enthusiasm for the picture one whit.
Besides, the picture deserves to be appreciated. I thoroughly enjoyed the first and second. The third feature offers more, more, more as it flies straight and true past the second star to the right on its way to morning.
Everybody will have a favourite moment in the new film. There are dozens to choose from in the teddy bears' picnic scene alone.
Mine, thought, occurs during our visit to the headquarters of Jabba the Hutt. The entire sequence is Lucas's special tribute to Flash Gordon. Like Ming the Merciless, Jabba maintains a strict dress code for the ladies in his court.
During an attempt to rescue Han Solo (Harrison Ford), the ever-spunky Princess Leia (Carrie Fisher) is captured by this unwholesome creature. In the best tradition of the Hollywood serials, the Hutt decides to make her his slave girl.
The next time we see her, she is outfitted in a brass bra bikini ensemble straight off the cover of a pulp magazine. It's a breathtakingly brief costume that leaves no doubt at all that our lovely, occasionally lethal, Leia really is a woman.
Such excitements aside, there are two issues that the new film raises, both of which would make good subjects for further study.
One is the fact that George Lucas really is a good director. Although the special effects in his films have become progressively more plentiful and spectacular, the actual direction of actors was handled best in the first film.
When it comes to getting just plain good performances, neither Irvin Kershner (Empire) nor Richard Marquand (Jedi) is nearly as good as Lucas himself.  What they provide is competent traffic control.
The other issue has to do with the storyline. Although he claims to have plotted the entire saga before making Star Wars, I get the distinct feeling that Lucas boxed himself into some uncomfortable corners in that first picture.
Like his other great creation, Indiana Jones, Lucas gives the impression of "just making this up as I go." When the dust settles on the premiere hoopla, fan critics and commentators are going to begin the job of sorting through the still unanswered questions.
Return of the Jedi, though finished, is not the end.

Afterword: Following the release of The Empire Strikes Back, and the announcement that Episode VI would be called Revenge of the Jedi, Lucas had a change of heart. Deciding that "revenge" was not in keeping with the positive values of The Force, he softened the sentiment by using the less angry verb "return." Pre-release posters bearing the original title immediately became sought-after collector's items.
After rereading my original reviews of the first three Star Wars features, I find myself somewhat embarrassed by my unabashed enthusiasm. Despite my claims of critical distance, they are the sort of raves that film publicists adore. Looking back on them, I now realize that something else was going on that affected my response to the "welcome, wonderful vision" Lucas offered. In early 1977, I was diagnosed with cancer. It was of a type that often proved fatal, and I was operated on twice that year, returning to work briefly between procedures. It was during that return that I saw and reviewed of Star Wars. A few weeks later, as I was being wheeled into the O.R. for my second operation, I replayed John Williams's music over and over again in my head. I survived the surgeries, and the chemotherapy that followed, all with the support of family, friends, the newspaper where I worked and, it seems, Lucas's Force. In the years since, my assessment of his movies and their effect on the popular culture has become more reliably critical. At the time, though, my judgement may have been skewed by subconscious feelings of gratitude for a positive vision when I really needed one. Clever, those Jedi mind tricks!