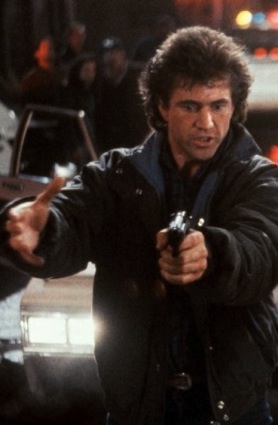 
Madness. Merriam-Webster's online dictionary offers four brief definitions: a. rage; b. insanity; c. extreme folly; or 4. ecstasy, enthusiasm. Examples of each can be found in the life and career of the actor and Oscar-winning director Mel Gibson. Anger issues? The man made his performing breakthrough playing Mad Max (1979), the post-apocalyptic motorcycle cop who reappeared in Mad Max 2 (The Road Warrior; 1981) and Mad Max Beyond Thunderdome (1985). Mental issues? Gibson founded his production company, Icon Entertainment, to tell the story of Shakespeare's deranged Dane, Hamlet (1990). Foolishness? Personal publicity issues resulted from Gibson's driving drunk and engaging in racialist invective while impaired. The 2006 incident has provided material for late night comedians for the past decade. Finally, a certain ecstatic insanity is apparent is Gibson's directorial choices, including the Academy Award-winning Braveheart (1995), and two foreign-language features: The Passion of the Christ (2004; Aramaic, Hebrew, Latin) Apocalypto (2006; Yucatec Maya). Mel Gibson, born on this day (January 3) in 1956, created his maddest character in collaboration with director Richard Donner. Crazy cop Martin Riggs made the first of his four screen appearances in the 1987 feature Lethal Weapon.

Friday, March 6, 1987.
LETHAL WEAPON. Written by Shane Black. Music by Michael Kamen and Eric Clapton. Co-produced and directed by Richard Donner. Running time: 108 minutes. Restricted entertainment with the B.C. Classifier's warning: frequent violence and very coarse language. HE'S MADDER THAN MAX. According to the LAPD's resident shrink (Mary Ellen Trainor), drug squad detective Martin Riggs (Mel Gibson) is a walking time bomb.
A Special Forces veteran, he used to be a supercop. His combination of gun skills and martial arts moves made him a Lethal Weapon.
Since his wife's death, though, he's been positively suicidal. The doc says that Riggs is a danger to himself and his fellow officers.
What the hell, it's Christmas.
Instead of treatment, the department decides to give Riggs a transfer. Suddenly staid, sober homicide sergeant Roger Murtaugh (Danny Glover) has a new partner.
It's a gift. Though two months late, Richard Donner's dynamic new cop show is one terrific Christmas package, an urban thriller that reaffirms its director's once-potent skills as a hit maker.
A former TV director, Donner is the man responsible for both the original Omen (1976) and Superman (1978) features. His third picture, the underrated 1980 psychological drama Inside Moves, was less well received, and he went into a period of creative decline represented by such disappointing fare as The Toy (1982) and Ladyhawke (1985).
Although his last film, a Steven Spielberg presentation called The Goonies (1985), was an efficient job of work, Lethal Weapon is a real comeback. Mounted with pace, style and mordant humour, it wastes no time getting down to the essentials.
The Case: In a shocking, almost surreal opening sequence, we see pretty, scantily-clad drug user Amanda Hunsaker (Jackie Swanson) dive to her death from a highrise apartment balcony.
The Cops: We then meet Murtaugh, naked in his bath. Donner '"dresses" the character quickly, revealing that he is a suburban family man about to celebrate a Yuletide birthday with his loving wife and children.
We first see Riggs naked on his bed in a rundown beachside mobile home. Awakened by his dog, he toys with a loaded automatic while sitting in front of a television playing old Looney Tunes cartoons.
Unlucky Amanda turns out to have been the daughter of wealthy banker Michael Hunsaker (Tom Atkins), an old army buddy of Murtaugh's and a man involved in things more menacing than mortgages. "It all goes back to the war, " he confesses.
"I worked for Air America .  . . "
Donner, a director adept at mixing thrills and laughter, does a bang-up job, "dressing'' Glover and Gibson with just the right mix of emotions and motivations to make their unlikely partnership flower into a believable friendship.

Afterword: In 1987, movie audiences were well aware that Air America was a dummy company that had been set up by the CIA. It was used as a front for its covert activities, and during the Vietnam war those activities included drug smuggling. In 1985, director Nicholas Meyer had made a cheeky reference to it in his brilliant Peace Corps comedy Volunteers. In 1990, Mel Gibson co-starred with Robert Downey Jr. in director Roger Spottiswoode's action-comedy Air America. They played pilots who discover that their missions include heroin smuggling. Director Donner reunited Gibson and Danny Glover for Lethal Weapon 2 in 1989, and for Lethal Weapon 3 in 1992. All three pictures were crowd pleasers and seriously profitable for distributor Warner Bros., but for a time the filmmakers chose to heed the cop buddies' final spoken lines in the third feature: "I'm too old for this shit." They relented in 1998, with Donner, Gibson and Glover returning for Lethal Weapon 4, another one much like the other ones. Mel Gibson turns 60 today (January 3, 2016).