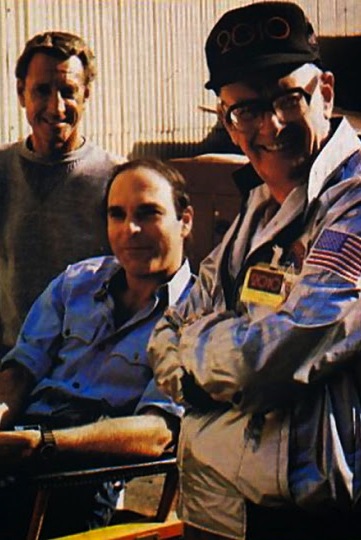 Actor Roy Scheider and director Peter Hyams pose with the legendary science-fiction writer Arthur C. Clarke on the set of their 1984 adaptation of his novel, 2010.


Second Odyssey more down to earth


Tonight (December 16), viewers in North America will see the final episode of Childhood's End, the six-hour TV adaptation of Arthur C. Clarke's classic science-fiction novel, first published in 1953. Coincidentally, the show concludes on the 98th anniversary of the author's birth. Much optioned but never previously filmed, Clarke's tale of first contact, alien intervention in human affairs and transcendent evolution was the first major step in the writer-scientist's own journey from a fascination with the paranormal to reality-based skepticism. Its profound influence on the genre becomes obvious when you consider that the narrative ideas that seem so derivative in this 2015 telefilm were popularized by Clarke. Today we know that Childhood's End was the novel that director Stanley Kubrick had in mind when he first met with Clarke to discuss a creative collaboration. Because the work had already been optioned by another director, Kubrick settled for expanding Clarke's 1951 short story The Sentinel, and the result was 2001: A Space Odyssey (1968). The film became a landmark in cinematic science fiction and brought mainstream literary recognition to genre legend Clarke. He wrote three sequels to his original Space Odyssey novel and, in 1984, collaborated with director Peter Hyams on the adaptation of the first of them, set in 2010.

Tuesday, January 1, 1985.
2010. Based on the novel 2010: Odyssey Two (1982) by Arthur C. Clarke. Music by David Shire. Written, produced, photographed and directed by Peter Hyams. Running time: 114 minutes. General entertainment with the B.C. Classifier's warning: occasional coarse language and swearing. 2001: A SPACE ODYSSEY  WAS a film very much of its time. Released in 1968, its non-narrative pretentions were embraced by a generation who saw in its techno-mythic imagery the ultimate trip.
A mocking satire, it offered director Stanley Kubrick's version of the dawn of man  — an  ape becomes more-than-ape when it discovers weaponry — and perhaps his twilight, in a moment when men who have become more machine than their machines make contact with the ineffable. A consistent, compelling vision, 2001 defied explanation, and in so doing became its own cult object.
2010 is a film of our time [1984]. Anxiously derivative and pragmatically concerned with success in the marketplace, it is an example of straightforward screen science fiction targeted at the mass audience.
Though officially a sequel, director Peter Hyams's follow-up feature has more in common with the creatively lacklustre Star Trek pictures than with the original 2001. A craftsmanlike job of work, his adaptation of Arthur C. Clarke's recent novel is likely to satisfy rather than bliss out most sci-fi fans.
The new movie opens with a recapitulation reminding us of how the Discovery,  a U.S. spacecraft, came to be floating among Jupiter's moons. Now, in the year 2010, the Soviets and Americans are racing to salvage it, reactivate the H.A.L. 9000 computer (the voice of Douglas Rain) and discover the meaning of lost astronaut David Bowman's final
message: "My God, it's full of stars!''
Despite increasing political tensions, Dimitri Moisevitch (Dana Elcar) approaches Heywood Floyd (Roy Scheider, taking over the role from 2001's William Sylvester), hoping to promote a little scientific detente. Seeing an opportunity to save some money, a "reactionary '' U.S. president allows three Americans to participate in the Russian space mission under Capt. Tanya Kirbuk (Helen Mirren).
During the lengthy voyage, the Earthside situation worsens to the point of war. On Jupiter, though, something even more cataclysmic is percolating, something that a transfigured Bowman (Keir Dullea) declares will be "wonderful."
Director Hyams's film career has had its ups and downs. His first attempt at future fantasy was the dull, plodding thriller Capricorn One (1978). Far better in both conception and execution was his cosmic western, Outland (1981).
Functioning here as writer, producer and cinematographer as well as director, Hyams does his best work yet. Even so, his 2010 plays like pre-2001 space opera. It recalls cinematic sci-fi's message-laden heyday, represented by such 1950s features as The Day the Earth Stood Still (1951) and the lunatic Red Planet Mars (1952).
Competent rather than inspired, 2010 argues that peace is good and life is a precious thing. That such sentiments are offered as the ultimate meaning of Kubrick's black monolith tells us more about the year just past than about those to come.

Afterword: Although I had the good fortune to interview Arthur C. Clarke during his 1968 visit to Toronto to promote the opening of 2001: A Space Odyssey, I've so far been unable to locate the published version of our chat. One thing about it that I've never forgotten, though, was his necktie. It featured a repeating pattern of tiny white rocket ships on a dark blue background, a subtle motif that was both tasteful and fascinating. When I asked him about it, he explained that it represented his membership in the British Interplanetary Society, an organization of futurists founded in 1933. Clarke joined it in 1934, and the tie was a gentle reminder that the acclaimed science-fiction author was also an accomplished scientist and science writer. It was in a BIS paper in early 1945 that he first proposed the use of geostationary orbits for communications satellites, an idea that he championed. The first geosynchronous satellite was launched a generation later in 1964. Ever since, such spacecraft are said to operate in "Clarke orbit." Sir Arthur Charles Clarke died in 2008 at the age of 90.

See also: During the 1990s, director Peter Hyams shot three feature films in Vancouver, among them the science-fiction thriller Timecop (1994).