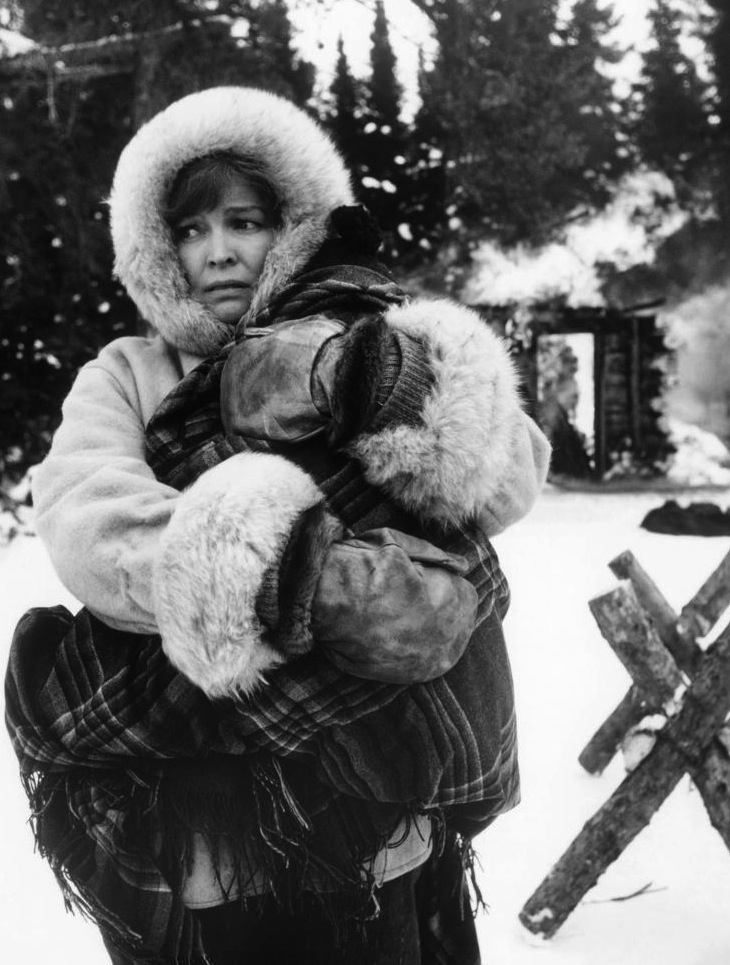 Indomitable in the face of tragedy, Olive Fredrickson (Ellen Burstyn) saves her child in director Allan King's Silence of the North (1981).


Born on this day (February 6) in 1930, Allan Winton King brought a documentarist's eye to a film that was a special project for its star, Ellen Burstyn. The story of Olive Fredrickson, the pioneer woman who was its hero, King's 1981 feature was set against Canada's Silence of the North.

Monday, November 2, 1981.
SILENCE OF THE NORTH. Written by Patricia Louisiana Knop, based on the 1972 book by Ben East and Olive Fredrickson. Music by Allan Macmillan. Directed by Allan King. Running time: 94 minutes. Mature entertainment with the B.C. Classifier's warning: occasional coarse language and swearing. SILENCE OF THE NORTH begins with the statement "this is a true story." A little danger light blinks on in my head whenever I see that claim.
Filmmakers abhor true stories. Their function in life is to tinker with the truth. I know of no feature film, from the much-praised All the President's Men to the justly criticized Death Hunt (1981) that didn't alter the facts for the sake of its story.
In her book, Silence of the North (Crown, 1972; reissued this month [1981] as a Warner Books paperback), Olive Fredrickson recalls hunting with her husband on May 10, 1923. "I saw a rabbit hunched under a clump of brush, the first one I had seen since fall. I had never wanted game more than I wanted that rabbit.
"I rested the .22 against a small tree and pulled the trigger. All I remembered afterward was fire in my face, blinding light. then a numbness in my nose and eyes."
In her screenplay, Silence of the North scriptwriter Patricia Louisiana Knop has Fredrickson (Ellen Burstyn) on her own in a cabin on Christmas Eve. Suddenly a huge bear appears at the window. To protect her infant child, Olive grabs the gun that we will see backfire in her face.
At its heart, Silence of the North is a tale of personal courage, both that of its central character, frontierswoman Olive Goodwin Reamer Fredrickson, and of its leading lady, actress Ellen Burstyn.
An Oscar winner for her performance in Martin Scorsese's 1974 feature, Alice Doesn't Live Here Anymore, Burstyn read Fredrickson's book that year, and made up her mind that she would bring the story to the screen.
A strong-willed, assertive performer, Burstyn kept her personal promise. The project came together when Universal Studios activated a Canadian subsidiary, Universal Productions Canada Inc., and the cameras began to turn in Smith, Alberta on September 7, 1979.
The film follows Olive's development from a romantic young woman who elopes with her childhood sweetheart, to a mature, life-worn widow for whom love eventually blooms again. It is, as Burstyn says, the story of a "woman (who) is a hero."
Olive's first love is for Walter Reamer (Tom Skerritt), a handsome dreamer who takes his farm-girl bride further and further north in pursuit of quick riches. A winter of unrelenting disaster culminates in their near-starvation as they attempt to trek out of the wilderness with their infant daughter.
Walter subsequently drowns during a trapping expedition, leaving Olive alone in the world to care for their three children. Embittered, Olive turns down an old suitor's proposal of marriage, and works her small potato patch with her daughters and infant son.
As the depression deepens, she loses the farm and moves to Calgary. There she re-encounters John Fredrickson (Gordon Pinsent), a gentle, loving man with whom she will finally find new love.
Under the direction of Allan (Who Has Seen the Wind) King, nature and the Alberta landscape become powerful participants in the story. Here, the spring break-up of ice on the Athabasca River is portrayed as an awesome natural drama all its own.
The picture's major problem is its fictionalizations. By inflating the cinematic shock value of genuine incidents from Fredrickson's life, Knop's script dilutes their reality and our ability to accept the character as courageous, rather than slightly crazy.
It's as if the filmmakers don't trust us to understand that a single mother's daily confrontation with the potato patch takes more real courage than a sudden unexpected encounter with a bear.
I believe that Burstyn is sincere in her desire to honour Fredrickson, who is now 80 [in 1981] and a resident of Vernon, B.C. It's too bad that her tribute to the indomitable Olive looks so much like Alice in the Outback.
*    *    *
DETROIT-BORN ELLEN BURSTYN must feel comfortable around Canadians. Her performance in Same Time, Next Year, a stage comedy from the pen of Bernard Slade of St. Catherines, Ontario, won the actress Broadway's Tony Award, and then an Oscar nomination when she starred in the 1978 film version.
Nova Scotian Daniel Petrie directed her a year later in Resurrection (1980), the story of a woman with preternatural healing powers. And, of course, Allan King, her director in Silence of the North, is Vancouver-born.

Afterword: That director Allan King was attracted to a "true story" should come as no surprise. The Vancouver native was a West Coast practitioner of cinema-verite, the pains-taking style of documentary perfected by the National Film Board's French-language filmmakers. A University of B.C. graduate, King is said to have preferred the term "actuality drama" for the method, which involved his documentary team moving in with its subjects. Making Warrendale, his classic 1967 study of children living in a Toronto group home, involved six weeks on site just getting the residents used to the team's presence. The actual filming of the award-winning, 100-minute feature took another eight weeks. Financed by the Canadian Broadcasting Corporation, Warrendale won the Cannes Film Festival's Prix d'Art, and put King among the fathers of today's reality TV genre. His next feature, 1969's A Married Couple, resulted from 10 weeks spent in the home of Billy and Antoinette Edwards. Four years later, the U.S. Public Broadcasting Service premiered its own copycat series An American Family (1973), followed by the British Broadcasting Corporation's The Family (1974). Perhaps King's most sincere flatterer was the U.S. director Woody Allen, whose 1992 imitation of A Married Couple was called Husbands and Wives. King's own fictional feature debut was 1977's award-winning Who Has Seen the Wind, an adaptation of iconic Canadian novelist W.O. Mitchell's coming-of-age tale set in Depression-era Saskatchewan. His second fictional feature, Silence of the North, was nominated for nine Genie awards, but failed to achieve box-office success. Not interested in relocating to Los Angeles, King pursued a career in Canadian television, directing multiple episodes of such shows as Alfred Hitchcock Presents (1987-89), Danger Bay (1986-90), Road to Avonlea (1991-96), and Twice in a Lifetime (1999-2000). Allan King died in 2009 at the age of 79.