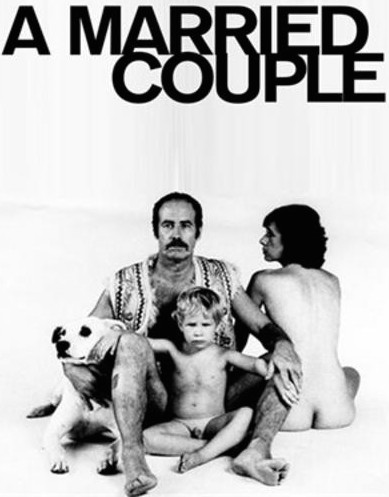 You, me and the camera


Pioneering Canadian director Allan King set out to make a new kind of documentary in the 1960s. In the process, he turned cinéma vérité into “actuality drama,” and set the stage for what has become the Reality TV genre with such innovative films as 1969's A Married Couple.

A MARRIED COUPLE. Music by Douglas Bush, Zalman Yanovsky.  A documentary feature produced and directed by Allan King. Running time: 97 minutes. THE PARTY IS  OVER.
Bob and Carol and Ted and Alice have all gone home. The two people left in the theatre with us are completely real.
They are Billy and Antoinette Edwards, A Married Couple.
For the next 97 minutes, Allan King, creator of the controversial 1967 documentary Warrendale, takes us into their home and invites us to look at the inner dynamics of their troubled marriage.
Like all couples, Billy and Antoinette have problems. Unlike most, they were persuaded to share their personal lives with an outsider, the unblinking camera of filmmaker King.
His movie crew moved in with them and for several weeks recorded nearly every detail of their stormy relationship.
Billy Edwards, 42, is a balding, not particularly stable adman, grimly facing the prospect of middle age. His 30-year-old wife Antoinette, an independent-minded woman, is becoming increasingly discontented with their married life.
They are a pair of essentially self-centred people. They argue.
They argue about money, about automobile rights, about her grand plans for their kitchen, about his frequent changes of job and about their sleeping accommodations.
Although they can never forget King’s ever-present camera, they learn to ignore it, treating it like an elderly parent who’s always there but never interferes.
Regulation weapons — sarcasm, vulgarity, discourtesy and indifference — are deployed, and a suburban Toronto home is turned into an emotional battlefield.  At one point, the couple almost come to blows.
At other times, the affection and love that originally brought them together glimmers through. Sometimes it’s focused on Bogart, their three-year-old son, sometimes on Merton, their ungainly white dog. Sometimes, it's on each other.
At all times, A Married Couple has the raw-edged honesty that comes from people living, rather than acting, before a camera. From the many, many hours of exposed film, Allan King has distilled a strong portrait of one particular marriage in conflict.
Unlike more conventional documentarists, King lets his camera “tell it like it is,” without either interfering in the action or overtly attempting to interpret it. “The film,” he said recently, “starts to dictate itself once you get into it.”
The story the Edwards dictated has its problems, faults that grew out of their complex personalities. From these occasionally confused elements, King has assembled a dramatically sound motion picture.
A Married Couple, an urban true-life adventure, won’t be to everyone’s taste. It should, however, be seen by a lot of other married couples.

Afterword: The Bob and Carol and Ted and Alice referred to in the first paragraph of my review was a 1969 movie title that would have been fresh in the minds of newspaper readers in 1970. Writer/director Paul Mazursky’s debut feature, it was a relationship comedy about Los Angeles documentary filmmaker Bob (Robert Culp) and his wife Carol (Natalie Wood), who preach the delights of a sexually open marriage to the initially reluctant Ted (Elliot Gould) and Alice (Dyan Cannon). Mate-swapping ensues, to the strains of Burt Bacharach’s sappy title tune, “What the World Needs Now Is Love (Sweet Love).” A major hit in its day, Mazursky’s picture stale-dated quickly. Though it inspired a single-season TV series in 1973, it’s largely forgotten today.
In real life, director Allan King’s Married Couple managed a temporary reconciliation after seeing all 70 hours of the film’s raw footage. Although Billy and Antoinette stayed together long enough to have a second child, they divorced in 1972. During the filmmaking, the couple trusted King completely. As I later learned, they all had been friends for years. King had lived with them during the post-production phase of his 1967 feature Warrendale, taking adman Billy’s advice on the design of that picture’s poster. When he noticed their marriage was in trouble, he suggest recording their interactions. After agreeing that the Edwards would have control over the final cut, King added cinematographer Richard Leiterman and sound man Chris Wranger to their home furnishings for ten weeks.
Critical reaction to the finished product ranged from the rapturous to the shocked. As is often the case in a time of significant social change, censorship was an issue. CTV, the Canadian television network that had commissioned the film, refused to broadcast it. Ontario’s Censor Board insisted on significant cuts before it could be released to theatres.
When the dust cleared, King ranked among the most influential cinematic innovators of the day. Four years later, the U.S. Public Broadcasting Service premiered its own copycat series, An American Family (1973), followed by the British Broadcasting Corporation's The Family (1974). Perhaps King's most sincere flatterer was U.S. director Woody Allen, whose 1992 homage to A Married Couple is called Husbands and Wives. In 2010, Simon Fraser University media professor Zoë Druick published Alan King’s A Married Couple, arguing the case for the film’s lasting influence on the popular culture. Druick justly calls King “the grandfather of Reality TV.”

See also: In 1970, Alan King discussed documentary at the University of British Columbia, and spoke of his future plans in this interview.