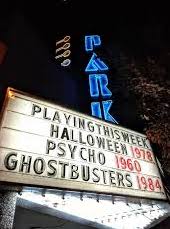 In a 2018 example of “event cinema,” the PARK THEATRE celebrated Hallowe’en.


On this day (August 1) in 1990, the chain-owned Park Theatre on Cambie Street closed its doors. Behind the scenes, though, angels took flight. In a matter of weeks, Vancouver-based Festival Cinemas turned the lights back on in the 49-year-old movie house.

AND THEN THERE WERE none.
The Park Theatre, the last single-auditorium Cineplex-Odeon site in greater Vancouver, closes tonight.
The Toronto-based theatre chain, an exhibitor with a preference for multi-screen operations, is not renewing its lease on the Cambie Street movie house.
The 650-seat cinema could be back in business before Thanksgiving, though.
Monday, independent Vancouver exhibitor Leonard Schein said that he hopes to sign a lease on Friday with Camy Properties Ltd., the local management company representing the interests of the theatre's Hong Kong-based owner.
Schein, who operates Denman Street's Starlight Cinema, has been in negotiation with Camy since last fall. Following the signing, he plans some site renovations with a view to a late September re-opening.
Together with the Starlight, a refurbished Park would be available to the 1990 Vancouver International Film Festival as a possible venue, Schein says.
The Riley Park neighbourhood cinema is going dark just three days shy of its 49th anniversary. Built at a cost of $40,000, the Park Theatre was opened Monday, August 4, 1941.
Air conditioned and boasting a selection of "naturalistic wall murals," it was a "modern architectural masterpiece," said one contemporary reporter.
On hand for the opening was Vancouver Mayor J.W. Cornett, who praised the newly formed Odeon Theatres of Canada for locating in "the fastest growing part of the city."
In recent years, The Park has been Vancouver's "Jesus house."
In 1973, it was home to Jesus Christ Superstar. Norman Jewison's brilliant adaptation of the Gospel-inspired rock opera ran for nearly a year.
In 1988, Martin Scorsese's controversial The Last Temptation of Christ had its local premiere in the Park. Denys Arcand's Jésus de Montréal played there last year [1989].
Featured as its opening attraction in 1941 was Model Wife, a non-controversial domestic relations comedy that starred Dick Powell and Joan Blondell.
Tonight, the curtains will close following a preview screening of Spike Lee's musical drama Mo' Better Blues.

Afterword: As of this writing, the Park — along with almost every other movie house in B.C. — is dark. This time, its closure is the result of the social-distancing measures necessitated by the coronavirus pandemic. Between its two shutdowns, the neighbourhood cinema has negotiated another 30 years of film-exhibition business history.
Leonard Schein’s Festival Cinemas managed the Park until 2001, the year the local cinema entrepreneur announced his retirement. For the next four years, it was run by a partnership between Alliance Atlantis Cinemas and Famous Players. In 2005, when the new group decided against renewing its lease with Camy Properties, Schein stepped in again. Together with his long-time business partner Tom Lightburn, he spent a reported $300,000 in renovations, reopening the Park as a 504-seat cinema that Festival operated until 2013.
When Schein (and Lightburn) retired again, they sold Festival Cinemas to Toronto-based Cineplex Entertainment, who took control of its remaining properties, the five-screen Fifth Avenue Cinemas and the single-screen Park. On July 1, 2016, the Park reinvented itself as an “event cinema” space. Instead of booking first-run features, it now attracts audiences with special-interest programming. Its inaugural booking offered a double feature: the 1983 Canadian comedy Strange Brew, paired with the 1984 Talking Heads concert movie, Stop Making Sense. “We’re temporarily closed,” the Park’s website says, “but we look forward to welcoming you back to the big screen soon!”
While we’re waiting, I can tell you that my own favourite Park memory came during that 1973-1974 run of Jesus Christ Superstar. In mid-1974, I had the opportunity to chat with singer Carl Anderson, who played Judas in director Norman Jewison’s adaptation of the rock opera, and who then was appearing in a local supper club. At the end of our interview, I mentioned that Superstar was well into the 11th month of its first-run engagement in Vancouver.
Since he was working nights, I offered to take him to a matinee. To my surprise (and delight) he took me up on it. A few days later, we sat together in the Park Theatre enjoying the picture, along with an early-afternoon audience who had no idea the charismatic actor on the screen was sitting among them.