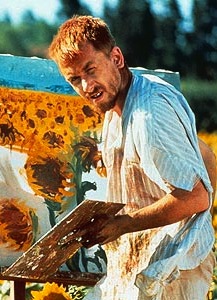 In a field of sunflowers, Vincent Van Gogh (Tim Roth) works on a painting (that will one day have inestimable value) in director Robert Altman's Vincent & Theo.


He was an artist resigned to poverty. “I can't change the fact that my paintings don't sell," Vincent Van Gogh wrote in a meditative mood. "But the time will come when people will recognize that they are worth more than the value of the paints used in the picture.” Born on this day (March 30) in 1853, he was passionate about his calling as an artist, producing some 1,200 works during his last nine years. (It is said he sold just one painting during his lifetime, The Red Vineyard, for which he was paid 400 Belgian francs, equal to about $1,000 US today.) As it turned out, a time did come when his oils would set sales records. In 1987, on the 134th anniversary of his birthday, the art world honoured his memory with a bidding war at Christie's auction house in London. When it was done, Yasuda, a Japanese life insurance company, was the proud owner of his 1888 painting Vase With 15 Sunflowers. It was sold for $39.7 million US (or $2.66 million per blossom). The modern art market being what it is, Van Gogh's record stood for less than two years, broken by the $47.8-million sale of a Picasso. (The current record holder is Paul Cezanne's The Card Players, for which the State of Qatar paid an estimated $259 million in 2011.) With considerably less money to spend, director Robert Altman managed to tell the story of two Van Goghs, Vincent & Theo (1990).

Wednesday, December 26, 1990.
VINCENT & THEO. Written by Julian Mitchell, Music by Gabriel Yared. Directed by Robert Altman. Running time: 140 minutes. Rated 14 Years Limited Admission with the B.C. Classifier's warning "some nudity and suggestive scenes, occasional violence and coarse language." THE FASCINATION WITH VINCENT Van Gogh is not new. Fifty-six years ago [1934], author Irving Stone made the bestseller lists with his florid Van Gogh biography Lust for Life.
In 1956, Vincente Minnelli directed the screen adaptation. Kirk Douglas's tormented performance earned him an Academy Award nomination, while Anthony Quinn, cast as the painter's sometimes-buddy Paul Gauguin, carried home the supporting actor Oscar.
Three years ago [1987], Dutch-born Australian film-maker Paul Cox produced Vincent — The Life and Death of Vincent Van Gogh. A documentary impression, it featured his paintings and showed us the landscapes that inspired them, all complemented by readings from the artist's letters to his brother, Theo.
Earlier this year [1990], Akira Kurosawa encountered the painter in his feature Dreams. "The sun, it compels me to paint," Van Gogh (Martin Scorsese) told him. "I can't waste my time here talking to you."
None of these is quite the right preparation for Robert Altman's Vincent & Theo, a feature biography in which the Nashville director argues that every passion has its price. Price, of course, is part of the fascination.
Altman's movie begins with a video-tape recording of the 1987 Christie's auction at which Van Gogh's The Sunflowers sold for 22.5 million pounds sterling [$39.7 million US]. As the bidding continues, the picture segues to the interior of a poor farm cottage and we see a scrofulous individual with filthy hands and stained teeth sprawled upon a bed.
"I'm going to be a painter," Vincent Van Gogh (Tim Roth) announces to his loyal, supportive younger brother Theo (Paul Rhys).
Theo is an aspiring art dealer, a man making a modest living as the employee of a private Parisian gallery. Theo is as intensely involved in the late 19th century art world as Vincent is with art itself.
Neither will be particularly successful. For Theo, the life of a boulevardier comes at the price of a syphilitic infection. Vincent, less socially secure, suffers profound loneliness, a condition that deteriorates into madness, self-mutilation and eventual self-destruction.
Unlike Minnelli, whose mid-1950s film romanticized its subject, Altman goes for the grit. His picture makes no excuses  for the Van Goghs, suggesting that their interdependent lives were as much an expression of the times as their talents.
"Comedy isn't pretty," Steve Martin has said. Nor is genius, Altman might add.
In the case of the Van Goghs, creativity was less a source of personal fulfillment than a massive cross to bear. Vincent & Theo tells it as it was.

Afterword: Altman had firsthand knowledge of the vagaries of artistic fashion. Although M*A*S*H (1970) and Nashville (1975) made his reputation as a major creative force, he saw his Hollywood bankability evaporate after the perceived failure of his big-budget musical, Popeye (1980). For the next ten years, he worked in television, theatre and on low-budget independent films based on stage plays, such as Come Back to the 5 & Dime, Jimmy Dean, Jimmy Dean (1982), Streamers (1983), Secret Honor (1984) and Fool For Love (1985). Vincent & Theo is an edited version of a four-part BBC mini-series. Altman's fortunes shifted again in 1990 with the release of his American comeback film, The Player.