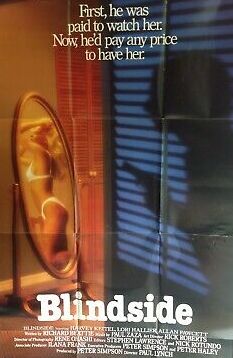 Peeper with a past


Serious stuff struggling to get out


Today (October 30) is the 20th annual Create a Great Funeral Day, a “holiday” devoted to planning a final farewell. An American idea, it originated at a time when mass murder had become mass entertainment, producing films such as Canadian director Paul Lynch’s 1987 feature Blindside

THE DEATH TOLL IS ENORMOUS. In just four features, some 34 lives are snuffed out in graphic detail for the delectation of filmgoers.
The guilt felt by the guilty is nil. In three of the four pictures, the villain is a serial killer with powers bordering on the supernatural.
The Destroyer is Ivan Moser (Lyle Alzado), convicted slayer of 22, who survived the electric chair. Described as “half-alive,” this massively muscled behemoth lurks about an abandoned state prison awaiting fresh prey.
"Terror" Simon Moon (Jack O’Halloran), did away with 23 before being committed to a facility for the criminally insane. A hulk with “no thought processes,” he escapes to kill again in Hero and the Terror.
Freddy Krueger (Robert Englund), the dream demon who specializes in teen terminations, has a rap sheet going back three films. "I am eternal!’’ he boasts to 17-year-old Alice Johnson (Lisa Wilcox) in A Nightmare on Elm Street 4: The Dream Master.
Only Blindside, director Paul Lynch’s dull, Canadian-made thriller, offers reasonably mortal villains. A low-rent reprise  of Francis Ford Coppola’s The Conversation (1974), Lynch's picture features Harvey Keitel as Penfield Gruber, a morose professional snoop caught in a web of gangland betrayal and assassination.
In common with Krueger, Moon and Moser, Lynch’s killers are uniformly amoral and without conscience as they “whack” one another with maniacal glee. The mood of the film, though, is utterly gloomy, reflecting the depressed Gruber’s conviction that people are awful.
Since Blindside's bad guys are all drug dealers, it's possible to read into their ends a minor moral lesson. By contrast, the other movies' villains deal exclusively in death.
Despite the relentless pursuit of soulful rogue cop Dan O'Brien (Chuck Norris), the deranged Moon gets to snap a selection of (mostly female) necks before he faces down the hero.
Moser manages to wipe out most of an exploitation film crew working on location in his prison hideout. Krueger, adding gallows humour to his repertoire, continues to deplete Springwood’s adolescent population.
Worth noting, perhaps, is the fact that both Moser and Krueger are bested by self-reliant female characters. (Deborah Foreman’s Susan Malone in Destroyer; Wilcox’s Johnson in Nightmare 4).
As welcome as this is as a film trend, it’s overshadowed by the realization that these movies are offering mass murder as entertainment. Taken individually or together, this stuff is sick.

Afterword: It hardly seemed safe to set foot on Vancouver’s Theatre Row during the first week of autumn, 1988. Mass murderers lurked in almost every movie house, it seemed. Overwhelmed, I offered up the above package review expressing my disappointment with the lot. Had I written a full review of Blindside, I might have mentioned that its director, Paul Lynch, made his feature debut with 1973’s The Hard Part Begins, a quintessentially Canadian tale of survival that starred Donnelly Rhodes as a country and western singer who doesn’t know when to quit. Also significant was his 1980 thriller Prom Night, the first of two films that Halloween scream queen Jamie Lee Curtis made during her 1979 working visit to Canada.
Casting frequent Martin Scorsese collaborator Harvey Keitel in the starring role gave Blindside’s surveillance-society theme a gravity that the picture’s no-tell-motel setting really didn’t deserve. Even so, there was a serious idea or two struggling to break free of the exploitation film ghetto. Lynch’s importance to the emerging industry was noted early on. In the March 1983 issue of Cinema Canada, under the headline Working Class Hero, the magazine’s editor Connie Tadros did a major interview with the director. After Blindside, Lynch found television a more reliable source of directorial assignments, and enjoyed a career helming TV movies and series episodes.