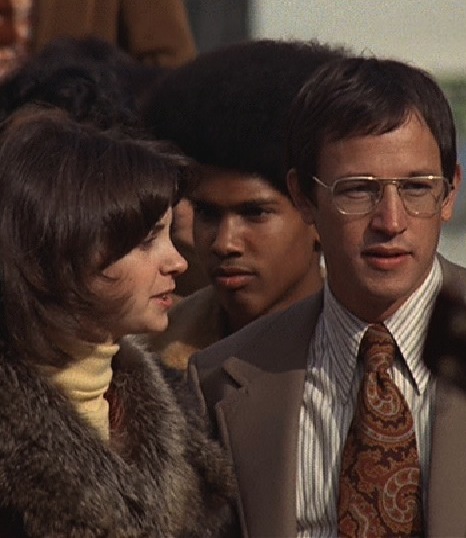 Under surveillance in San Francisco's Uniion Square, Amy (Cindy Williams) and Mark (Frederic Forrest) have no idea that their every word is being recorded, in Francis Ford Coppola's The Conversation.

Trust for no one, nothing


During an era of social upheaval, her screen characters were reassuringly normal and naturally nice. Born on this day (August 22) in 1947, Cindy Williams became famous playing the level-headed kid sister, or the perky, positive best friend. Her breakthrough role was Laurie Henderson, whose heart belonged to Steve Bolander (Ron Howard) in 1973's American Graffiti. Noting the huge audience for seemingly simpler times, TV producer Garry Marshall gave America Ron Howard as a teen enjoying life in the Happy Days of the late 1950s. It was there that Williams was first seen as Shirley Feeney, best friend of Laverne De Fazio (Penny Marshall). Their three episodes as guest stars became a seven-season partnership in Laverne & Shirley (1976-1982), a show in which they played bottle-cappers in Milwaukee's Shotz brewery, circa 1958. Often overlooked is Williams's work with two young artists who sought to bring change to Hollywood. Success eluded writer/director Bruce Kimmel, for whom Williams starred in 1976's The First Nudie Musical, and the even more obscure sci-fi musical comedy The Creature that Wasn't Nice (1981). Success was already assured for writer/director Frances Ford Coppola. He had two screenwriting Oscars on his shelf when he cast Williams to be the target of surveillance in his artistically daring 1974 feature, The Conversation.

Friday, May 3, 1974.
THE CONVERSATION. Music by David Shire. Written, produced and directed by Francis Ford Coppola. Running time: 113 minutes. Mature entertainment. INCONSPICUOUS IN A CROWD, uncomfortable in company, Harry Caul (Gene Hackman) is the sort of man that people remember only vaguely. "A quiet fellow," they would say. "A man of few words, a good listener."
Caul does listen well. Listening, in fact is his business. An expert in electronic surveillance, he is known to his professional rivals as "the best bugger on the West Coast."
Caul's profession has fascinated filmmaker Francis Ford Coppola for years. In 1966, he began developing an original screenplay about surveillance men. Had it been filmed then, it might well have been seen as a natural companion piece to Michelangelo Antonioni's Blow-Up.
In an unusual "director's letter" accompanying his new film's press kit, Coppola writes:
"I had no idea of what was to come in 1973. White House plumbers, Watergate, Ellsberg files, of course were unfamiliar phrases to me (in 1966), and even now I'm not completely sure of how these names and events relate to this film, despite so many coincidences and prophecies."
A working draft was ready by 1969, but even then the time was not right. It took the phenomenal success of Coppola's The Godfather and his partnership with Peter (Paper Moon) Bogdanovlch and William (The Exorcist) Friedkin to loosen enough investment money to make a stark, intellectual shocker like The Conversation.
Maybe it was just as well. At the time, comparisons with 1966's Blow-Up, Italian director Antonioni's first English-language film, would probably have hurt chances for Coppola's picture with both art film and popcorn movie audiences.
Today, though, it can be seen for what it is, a film that stands head and shoulders above Antonloni's. Coppola offers filmgoers a tough-minded look at contemporary reality and morality, as filtered through the recording heads of a tape deck. Super-charged and timely, The Conversation is a thriller with perfect pitch,
In Blow-Up, Antonioni was playing an effete game with his audience. His hero, played rather off-handedly by David Hemmings, is a London fashion photographer who becomes disturbed when he begins seeing evidence of murder in the distant background of some pictures that he casually took in a park.
Coppola's Harry Caul has no such artistic sensibility. A capable and single-minded technician, he takes pride in his ability to perform seemingly impossible tasks of electronic eavesdropping.
Recognized as a master of industrial espionage, he is sought after by both private and governmental clients with a powerful need to listen in on conversations not meant for their (or Harry's) ears.
The film opens in San Francisco's Union Square, a midtown block with a mid-day crowd. Caul is in charge of a three-man surveillance team. His target: young couple Amy (Cindy Williams) and Mark (Frederic Forrest) who are in earnest discussion and on the move in the crowd.
Coppola, working as both author and director, begins by showing us a man at work. Then, through a series of small but significant incidents, shows us how much the work is the man.
Suspicion and insecurity permeate Harry Caul's existence. A professional snooper, he has made personal privacy his own strongest need.
Returning to his triple-locked and alarm-belled apartment, Caul discovers a bottle of wine inside his door, a birthday gift from his landlord. His response to the little courtesy is cold fury. Someone has invaded his privacy.
Caul trusts no one. He tells both his clients and his doleful girlfriend Amy (Teri Garr) that he has no phone. He trusts nothing. Throughout the film, he wears a tatty plastic raincoat over his street clothes. It never rains, but, Caul probably reasons, at some point it might.
Working at one end of an empty warehouse, he produces the tape that's been ordered, and then personally takes it around to his industrialist client (Robert Duvall). He considers a meeting with Martin Stett (Harrison Ford), the client's executive assistant, to be a violation of his professional ethics.
He'll make delivery to, and take payment from, his client — or no one.
"Now look," says the sinister Stett. "Don't get involved with this, Mr. Caul. These tapes are dangerous. Someone might get hurt."
Despite the implied threat, Caul leaves, keeping his tape.
Back in his workshop, he runs over the seemingly innocent conversation. Technical quality, not content, has always been his concern. He finds part of the conversation is masked by the music of a steel band.
Working with the master recordings, he manages to remove the excess sound. Now eight new words can be heard: "He'd kill us if he got the chance."
For the first time, Caul — and the audience —are faced with the question of moral responsibility. To what use are Caul's tapes being put? How have lives been altered, or perhaps even ended, as a result of his surveillance?
For the first time, Caul becomes involved.
Gene Hackman, an Academy Award-winner for playing the unstoppable drug detective in 1971's The French Connection, turns in a sensitive,  troubled performance. Like Popeye Doyle, Harry Caul is a loner.
Unlike Doyle, though, he is not a man of action. He wants only to be left alone. For him, the revelation that he may be the catalyst for monstrous things is an energy sapping, almost mind-snapping torment.
In The Conversation, Coppola has created a real and haunting techno-terror tale. It's a film that gets to the guts of a headline issue, presenting its case in a dramatic and challenging way.

Afterword: In terms of the modern surveillance state, Coppola's 1974 feature — nominated for best picture, best screenplay and best sound Oscars — seems like Happy Days. Who knew that Harry Caul's mom-and-pop snoop shop would morph into the multi-national behemoth that is the NSA? There was a time when a socially conscious Hollywood made heroes out of whistleblowers (in movies such as 1975's Three Days of the Condor). Today, a Julian Assange (the WikiLeaks founder currently resident in London's Ecuadorian embassy) is more likely to be attacked in a "biographical" thriller, such as 2013's The Fifth Estate. I shudder to think what the military-industrial-entertainment complex has in store for the self-exiled Edward Snowden.

See also: For more on Cindy Williams's feature films, see my reviews of American Graffiti (1975) and The First Nudie Musical (1976).