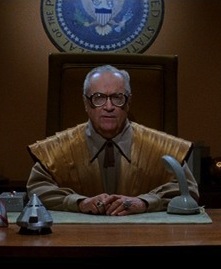 Magazine editor and science-fiction fan Forrest Ackerman makes a cameo appearance as the President of the United States in director Robert K. Weiss's film-within-the film Amazon Women on the Moon (1987).


Forrest James Ackerman, born on this day (November 24) in 1916, did not invent science-fiction fandom. What the native Los Angelino did do, though, is play a major role in popularizing the genre at a time when it was still a marginal entertainment form. In the process, he lived his passion, turning fandom into his profession. Although Ackerman was a celebrity — the man who became famous for being a fan — he was less interested in personal aggrandizement than in sharing his enthusiasms and promoting their creators. He was friends with most of the writers working in the genre, and amassed a personal library of about 300,000 books, plus items of movie memorabilia, all of which he shared with fellow fans in his home-turned-museum. Often credited with coining the abbreviation "sci-fi," he supported his collecting habit by working as a literary agent and magazine editor. He's best remembered for Famous Monsters of Filmland (1958-1983), a celebration of classic horror movies that ran for 27 years and 191 issues. Less known was his Spacemen (1961-65), a magazine that ran just eight issues, but focused on his first love, SF movies. The moviemakers returned the love, often creating cameo roles for him in their pictures. Though most of his appearances were in low-budget exploitation features, Ackerman had his share of A-list moments, including one playing the President of the United States in the team-directed 1987 comedy Amazon Women on the Moon.

Monday, November 30, 1987.
AMAZON WOMEN ON THE MOON. Written by Michael Barrie and Jim Mulholland. Music by Ira Newborn. Hairlooming, Bullshit or Not, Critics Corner, Roast Your Loved One, and Reckless Youth directed by Joe Dante; Pethouse Video, Son of the Invisible Man and Art Sale directed by Carl Gottlieb; Two I.D.s directed by Peter Horton; Mondo Condo, Hospital, Blacks Without Soul and Video Date directed by John Landis; Murray in Videoland, Amazon Women on the Moon, Silly Pate, Video Pirates, First Lady of the Evening and Titan Man directed by Robert K. Weiss. Running time: 84 minutes. Rated 14 Years Limited Admission with the B.C. Classifiers warning: some nudity, suggestive scenes, occasional very coarse language. PERHAPS IT WAS MEANT as a celebration. If it had been released in May (as originally planned), Amazon Women on the Moon would have coincided with director John Landis's acquittal in the long-running Twilight Zone - The Movie manslaughter trial.
It does mark an anniversary. It's been 10 years since the release of The Kentucky Fried Movie (1977) the low-budget satirical anthology Landis directed from material written by David Zucker, Jim Abrahams and Jerry Zucker.
A wild and crazy shock comedy, the 1977 production consisted of 22 segments spoofing television and movie cliches. There were even a few name stars to be seen, including Henry Gibson, George Lazenby, Bill Bixby and Donald Sutherland.
Abrahams and the Zuckers went on to group-direct 1980's Airplane. Landis, meanwhile, made it to the top with Animal House (1978), and such big budget comedies as The Blues Brothers (1980), An American Werewolf in London (1981), Trading Places (1983), and The Three Amigos (1986).
Amazon Women on the Moon, satirizing late-night broadcasting on the fictional WIDB-TV, recalls the old days. It reunites Landis, not with Abrahams and the Zuckers, but with Kentucky Fried producer Robert K. Weiss.
Like the ill-fated Twilight Zone project, it is a multi-part picture representing the efforts of five directors. Recalling Kentucky Fried, it offers 22 segments, sending up movies, TV and the newest mass medium, home video.
Sharing directorial duties with Landis are Joe Dante, Carl Gottlieb, Peter Horton and producer Weiss, all working from a screenplay by newcomers Michael Barrie and Jim Mulholland.
Its various bits feature lots of familiar faces, including those of Lou Jacobi, Michelle Pfeiffer, Griffin Dunne, Steve Forrest, Joey Travolta, Rosanna Arquette, Steve Guttenberg, Henry Silva, Henny Youngman, Steve Allen, Ed Begley Jr., Angel Tompkins, Kelly Preston, Ralph Bellamy, and Marc McClure.
The title refers to the picture's centrepiece, a bang-on parody of a mid-1950s sci-fi schlocker. Starring exploitation movie queen Sybil Danning, perfect as the Amazon leader, it features fan-magazine editor Forrest Ackerman as the U.S. President. Directed by Weiss, it is the longest bit and is seen in four parts (despite an announcer's sonorous promise that it will be shown "without commercial interruption.")
Perhaps I expected too much. Given the talent involved, I'd hoped for uninterrupted hilarity.
There are funny bits — Landis's own Blacks Without Soul is a hoot; so too Dante's Reckless Youth, with Carrie Fisher — but for the most part it's only titter funny — Weiss's Video Pirates seemed more like product placement than parody. Too few moments were great, booming belly-laugh funny.
I guess a decade of gross-out gags and shock humour has left me inured to just about every satirical outrage. In addition, I've been spoiled by Canada's SCTV. The consistent quality of that homegrown television comedy troupe has set a standard that few big-screen features can match.
Despite its big budget and big names, Amazon Women on the Moon offers parodies that are no funnier than today's regular small-screen fare.

Afterword: A headline news story for years, the Twilight Zone - The Movie tragedy needed no further explanation to readers in 1987. Director John Landis and four of his crew members had been charged with involuntary manslaughter following a July 23, 1982, helicopter crash during filming that killed actor Vic Morrow and two child extras. A nine-month trial (1986-1987), resulted in a not-guilty verdict, referred to in my review of Amazon Women on the Moon. Not a box-office success, the anthology comedy was too late in the cycle of feature-film satires. Television shows such as Canada's SCTV and Saturday Night Live had already stolen its moment, and cable television entrepreneur HBO was about to launch a dedicated Comedy Channel (1991). Forrest Ackerman, having achieved the presidency, went on to play a judge (in 1991's Nudist Colony of the Dead) and a general (Scarlet Moon; 2006). Although some sources credit him with as many as 200 film appearances, his IMDb biography lists just 50 acting roles. Ackerman died in December 2008 at the age of 92.